‘The Young and The Restless’ Spoilers – Adam Kidnapped – Who Has Him and What Will it Take to Get Him Back? 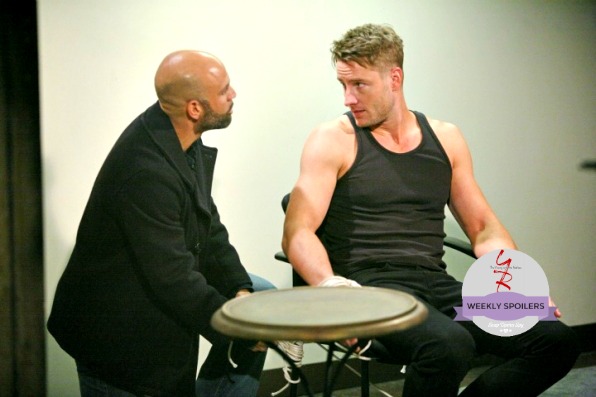 ‘The Young and The Restless’ (Y&R) spoilers in a new video shows that next week Adam Newman’s [Justin Hartley] kidnapping will be front and center. Word spreads across Genoa City that Adam has been taken and it looks like there is more than one possible culprit.

When Victor Newman [Eric Braeden] got the ransom email it demanded that he hand over “the girl” to get Adam back safely. Victor assumes straight away that it was the Santoris. Marisa Sierras [Sofia Pernas] thinks the same but Luca Santori [Miles Gaston Villanueva] protests.

Across town, when Kevin Fisher [Greg Rikaart] has hacker Natalie [Mara McCaffray] dig into Victor’s email and they all read it, Mariah Copeland [Camryn Grimes] kneejerks to assuming “the girl” in question is Natalie herself since she double dipped on investors for her internet project.

Which is it? If it’s Marisa they want, the kidnapping culprit could be the Santoris or Marco Annicelli [Peter Bergman]. You’ll recall Marco’s name has been raised recently but then the jailer told Luca he was dead. It’s doubtful that demon is really gone for good.

Alternately, it could be the Santoris who want Marisa out of Luca’s life. There’s a history of them running her off, but Luca assures Victor his dad wouldn’t approach it that way. If it’s Natalie they want, the other investors are the obvious answer.

Victor is trying to keep the kidnapping quiet, but Chelsea Newman [Melissa Claire Egan] is appealing to everyone to get involved including Dylan McAvoy [Steve Burton] and Nick Newman [Joshua Morrow]. Y&R spoilers indicate new cop Dylan will lead the search and rescue efforts to try and find Adam.

Adam himself isn’t taking this kidnapping lying down. The video spoilers show him trying to free himself and get away from his captors. Will Adam be able to save himself or will his escape efforts result in violent reprisal by his captors?

This kidnapping will encourage some strange bedfellow pairings. Chelsea and Victor will work together – they are the ones with the most skin in the game that want Adam back the most. And Luca and Noah Newman [Robert Adamson] will pair up to try and protect Marisa.

Victor had his security people kidnap Marisa so he’s got her ready to hand over, but when he hears about Natalie’s double-dealing, he’ll have a serious talk with the devious hacker. If Victor gives the wrong hostage in the exchange, he could lose his son.

What do you think Y&R fans, is it Luca’s family that took Adam? Is Peter’s evil doppelganger Marco back? Or is all of this drama driven by Natalie’s unethical business dealings? Share your thoughts in the comments below.

And be sure to check back with Soap Opera Spy often for more ‘The Young and The Restless’ spoilers and news.