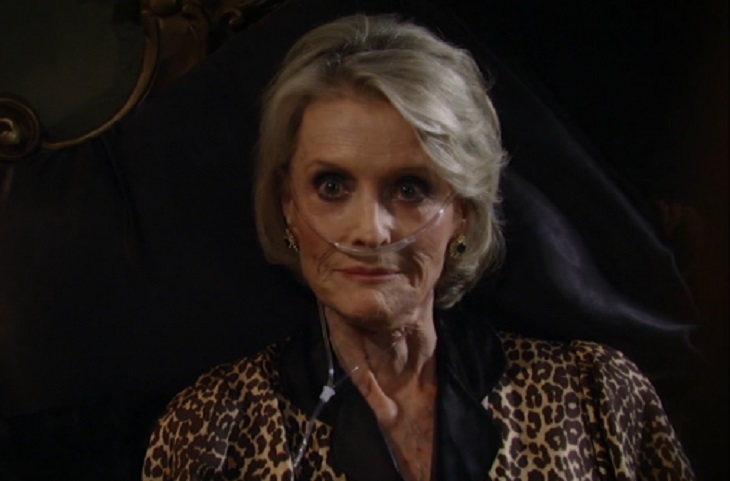 Is Helena Cassadine really dead?  ‘General Hospital’ spoilers have been floating around for weeks that Constance Towers’ most recent exit from the ABC soap opera was just another false alarm.  And, Constance seems to think so too!  Helena Cassadine is by far the most resilient character to ever step foot in Port Charles, seriously the woman can have her own video montage of death scenes.  Who is to say that she can’t come back from the dead…again?

Constance Towers recently sat down with TV Insider’s Michael Logan to discuss a new show she is working on with ‘General Hospital’ alum called ‘11.22.63′ (the series showcases the assassination of President John F. Kennedy).  The talk turned to Constance’s most recent exit from ‘General Hospital’ and Helena Cassadine’s death.  The iconic actress revealed that she thinks her character could be resurrected again in the future – and ‘GH‘ fans probably haven’t seen the last of her.

Michael Logan asked Constance if she thought Helena was really dead and she dished, “There were things said in those final scenes that suggested she may be up to something, and then there were the knowing looks between her and Nikolas. Tyler Christopher and I weren’t just adlibbing those looks. They were in the script. We were actually given that direction.”

Towers also thought it was strange that none of the production team or writers even acknowledged that they had just killed her off.  You would think that they would have made a big deal about saying “goodbye” to her on set – but instead they just acted like it was another day at the office.  If they hadn’t planned on bringing her back in the future, then the she believes that the cast and crew would have made a bigger deal about bidding her farewell.

Related: Nancy Lee Grahn Teases ‘Julexis’ Wedding – Will Alexis And Julian Make It Down The Aisle?

What do you think ‘General Hospital‘ fans?  Is Helena Cassadine really dead?  Or is it just a matter of time before Constance Towers is back on the Port Charles set?  Share your thoughts in the comments below and don’t forget to check Soap Opera Spy for all of your ‘General Hospital‘ spoilers and news.