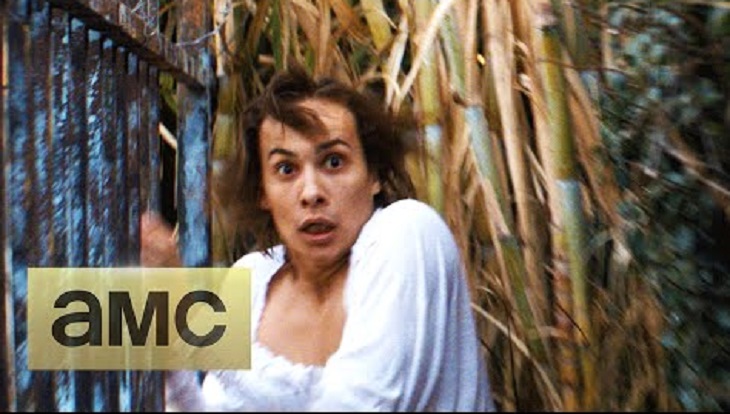 Fear the Walking Dead (FTWD) returned with Nick Clark (Frank Dillane) searching for answers that lead him into a deadly “eat or be eaten” world.  At the Colonia, we are introduced to new characters, Alejandro (Paul Calderon) and Luciana (Danay Garcia).  Alejandro seems to be the leader of the community and welcomes Nick through the doors where he sees a happy, smiling community with kids playing soccer and a makeshift market.

We will see that Luciana is a badass, and when she finds Nick initially, she clearly wasn’t looking for him and was tempted to leave him behind.  Looks like she has some secrets to hide.  We do learn that she will develop some sort of relationship with Nick in the next few episodes.  So is this community too good to be true?

Related: Robert Kirkman Promises Season 2 Will Get ‘Much More Savage!’

As this was the first time FTWD dug deep into one specific character, Dave Erickson explains that with the family fractured, it was the perfect time for them to invest, episode by episode, a bit more into specifics; bringing back Lexi Johnson as Gloria, and recreating the very first moments of Fear the Walking Dead were fun, but necessary to dig deeper into Nick’s state of mind.

Fear the Walking Dead’s showrunner, Dave Erickson continues to explain that the main reason they chose to do the character of Nick first is because of his moves in the finale and what would have led to the huge, emotional decision he made.  The two things they really want to explore about his journey is the parallels to the Gloria story and to his father’s story; more about the absence of his father as the season moves forward.

In one of the flashbacks, we see his mother, Madison (Kim Dickens) telling Nick that his father died, right at the point where Nick is trying to get his life back together.  The revelation of his dad’s death, isn’t what made Nick an addict, he was already drinking and smoking, but not injecting.  The emotions and conflicted feelings may have pushed him over the edge.  The question will remain would he have been able to get it together if his dad had stayed alive?  We will never know, but we know for sure his dad’s death was a turning point for him.

Currently, Nick feels like he is on a spiritual journey.  He needed to get away from his mother, Madison because she would immediately feel that the way Nick is acting is a new manifestation of his addiction.  “I’m trying to find a place where the dead aren’t monsters”, Nick says, but he’s also looking to fill the gaps, to find something resembling a father figure.

He is on a journey to find some connection in this world that he finds to be more natural for him.  Nick tells his mother that he can’t die, and this episode affirms that.  By the end of the episode, Nick will feel like he is bulletproof.  It’s a great way to end the episode, but it also opens up the possibility that he is heading for a huge fall.