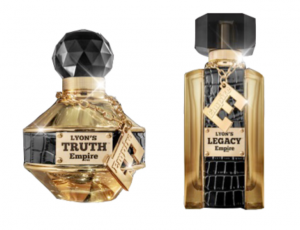 Branching out into cosmetics the ‘Empire’ brand partnered with CoverGirl in March 2016 offering fans a collection of several shades of eye color, lip colors, blush, mascara and more so viewers can achieve the Becky [Gabourey Sidibe] look, the Anika [Grace Gealey] look or the Tiana [Seraya] look.

Lyon’s Truth will be the fragrance available to female fans of ‘Empire.’ The eau de parfum is describe as having a floral base with notes of blackberry, velvet plum, violet blossom and Bulgarian rose. Essence reports that the ladies perfume “is anchored by rich and sensual notes like sandalwood, tonka bean and vanilla.”

The gentlemen fans of ‘Empire’ won’t be left out, Lyon’s Legacy has been created for the guys. Described as a “virile fragrance taken right out of Lucious’s [Terrence Howardd] cigar room.” Men will find a masculine bloom with sweet and citrusy notes of bergamot, lemon water and geranium “grounded in the rich notes of warm amber, vanilla suede and tobacco leaf.”

Lyon’s Truth and Lyon’s Legacy are set to launch in September 2016 and will be sold exclusively at Macy’s for the holiday season.