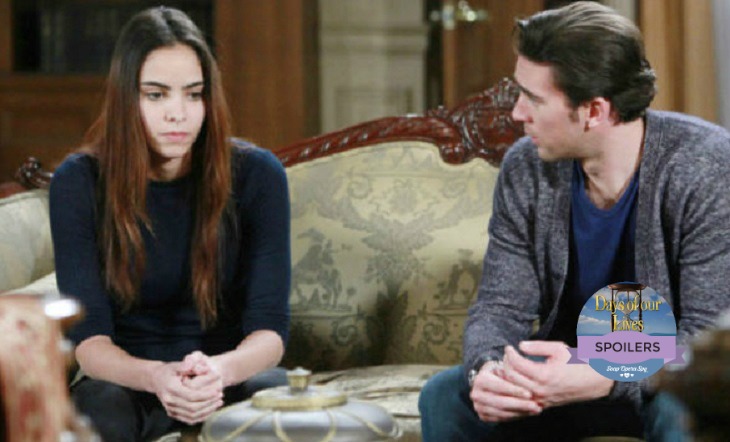 “Days of Our Lives” spoilers for Tuesday, June 7, tease that Kate (Lauren Koslow) will try to back up her latest claims. After Deimos (Vincent Irizarry) hit his head and fell into the river, Kate had to think fast. Since Kate had already recorded Deimos and Nicole’s (Arianne Zucker) fight, she knew she could make this look like a murder. Kate will weave a clever tale to a stunned Roman (Josh Taylor).

Roman may not want to believe that this lovers’ quarrel escalated to a killing, but it should be tough for him to ignore the evidence. Once Kate has that part of her plan out of the way, she’ll get started on phase two. DOOL viewers know that Kate wanted Deimos’ power and she’ll realize that she still has a chance to get it. “Days of Our Lives” spoilers indicate that Kate will pay Aiden (Daniel Cosgrove) a visit to propose a deal.

Related: Alison Sweeney Discusses Will Horton’s Death, Whether Or Not She Will Return To ‘Days’

It appears Kate has some kind of dirt on Aiden. She may know something that could knock Aiden out of his second shot with Hope (Kristian Alfonso). “Days” spoilers say Aiden will agree to draw up the papers and make it seem like Kate tied the knot with Deimos. That way she can be the legal heir to Deimos’ assets.

Kate really covered all of her bases – or at least that’s what she thinks. Things could get tricky for Kate when Deimos shows up alive, but she’ll be pretty pleased with herself for now. Meanwhile, Ciara (Vivian Jovanni) will also be pleased when she gets an opportunity to grow closer to Chad (Billy Flynn).

As Chad struggles with being apart from a tormented Abigail (Kate Mansi), he’ll continue to drown his sorrows. Ciara will try to take care of Chad as he deals with his heartbreak, but his drunkenness could cause problems. We’ll likely see some form of affection between these two. Ciara recently kissed Chad in a dream, but that could turn into a reality in Tuesday’s episode.

Finally, we’ll see Ximena Duque make her debut as Blanca. She’ll arrive at Rafe’s (Galen Gering) house and announce that she’s a friend of Adriana’s (Alma Delfina). Rafe will figure out that his mother has been doing some matchmaking. DOOL rumors hint that Rafe could be tempted by Blanca, but he just won’t be able to shake the idea of a future with Hope. Stick with “Days of Our Lives” for updates on the excitement Blanca will bring to Salem.

So “Days” fans, what do you think about the news that Kate will work out an agreement with Aiden? Will Kate pay the price later? Will Chad and Ciara heat things up? Are you ready to see what Blanca is all about? Voice your opinion in the comments below and don’t forget to check Soap Opera Spy often for the latest “Days of Our Lives” spoilers, rumors, updates and news.