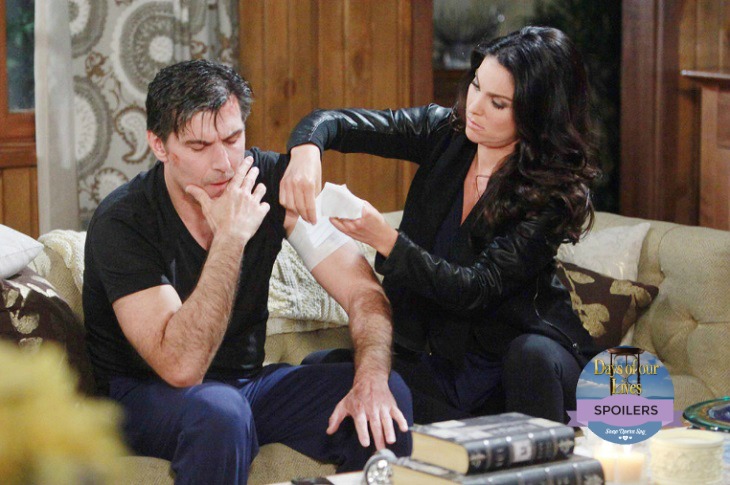 “Days of Our Lives” spoilers for Tuesday, June 14, tease that Chloe (Nadia Bjorlin) will bring Deimos (Vincent Irizarry) back to her place. She’ll help him bandage his wounds and try to get to the bottom of what happened. Deimos will have a new outlook thanks to his near-death experience. He’ll come clean about the lies he told Chloe in the past and hope she’ll forgive him.

DOOL spoilers say Deimos will reveal that he was using Chloe when they connected in Chicago. Deimos said his name was Robert and tried to get information about the Kiriakis family. It was all part of Deimos’ retribution strategy, but he’ll start to wonder if he should leave his vendetta behind. Revenge isn’t so sweet when you nearly die in a dangerous ride down a river.

Meanwhile, Nicole (Arianne Zucker) will also learn that vengeance isn’t all it’s cracked up to be. By trying to win Deimos over, Nicole provoked Kate’s (Lauren Koslow) wrath. Now Nicole runs the risk of going to prison for Deimos’ “murder.” “Days of Our Lives” spoilers indicate that Nicole will try to explain the situation to Rafe (Galen Gering). She’ll ask her friend to hear her out and support her through this crisis.

Unfortunately, Nicole’s string of bad luck isn’t over yet. “Days” spoilers say Victor (John Aniston) will make an intriguing offer to Kate. We don’t know the details of this proposal, but we can confirm that they’ll make some form of a deal. There’s a good chance Victor will agree to let Nicole go down if Kate gives him what he wants. Poor Nicole is about to get stabbed in the back.

Elsewhere, Belle (Martha Madison) will meet up with Shawn (Brandon Beemer) for a date night. They’ll share dinner and discuss where they stand. Shawn and Belle will try to figure out if their relationship can be saved. Based on down-the-road spoilers, it appears they’ll be willing to give it another try.

It’s been tough for Philip (John-Paul Lavoiser) to watch Belle move on, but he’ll try to stay busy. Philip will attempt to patch things up with Victor in Tuesday’s episode. He’ll manage to find a new love interest as well.

Will this be a fling or something more? Time will tell, but DOOL rumors hint that Philip and Chloe could become a hot pairing eventually. Maybe that means Philip’s latest gal is merely a hookup. Stick with “Days of Our Lives” for updates on what the future holds for Philip.

So “Days” fans, what do you think about the news that Chloe will help Deimos out? Will she forgive his previous deception? How will Nicole cope with Victor’s betrayal? Who will Philip hook up with? Voice your opinion in the comments below and don’t forget to check Soap Opera Spy often for the latest “Days of Our Lives” spoilers, rumors, updates and news.