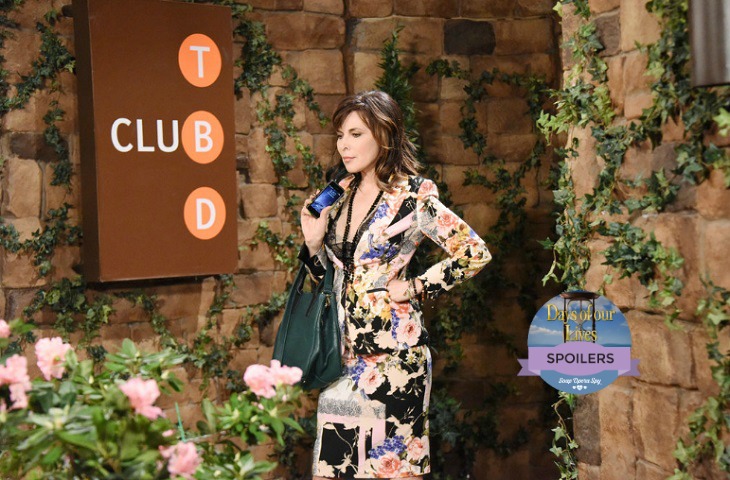 “Days of Our Lives” spoilers for Tuesday, August 30, tease that Kate (Lauren Koslow) will make a surprising move. DOOL viewers know that Kate was forced out of the mansion after Deimos (Vincent Irizarry) returned from the “dead.” It looks like Kate has found a new place to stay. She’s about to make a purchase that will shake things up in Salem.

“Days” spoilers reveal that Kate will buy Martin house from Doug (Bill Hayes) and Julie (Susan Seaforth Hayes). Once the sale is official, Kate will throw all of the guests out. Running a B&B is just not Kate’s style. She’s not exactly a people person and she’ll have other ventures that need her attention anyway.

Related: After Aiden Appointed The DA – Hope Wants To Quit The Police Force

Elsewhere, Chloe (Nadia Bjorlin) and Philip (John-Paul Lavoisier) will try to form a good plan. Philip has agreed to pose as Chloe’s “baby daddy” and they need to make their claims believable. Chloe and Philip will concoct something that makes sense, but it won’t satisfy Deimos. You won’t want to miss the trouble that’s brewing.

Other “Days of Our Lives” spoilers say Hope (Kristian Alfonso) won’t be able to contain her rage. Now that Aiden (Daniel Cosgrove) has secured Justin’s (Wally Kurth) job, Hope intends on giving him a piece of her mind. She’ll demand some answers about how Aiden became the district attorney and rip into him for crossing the line.

Aiden’s arrogant response will just make Hope angrier. Hope will unleash her wrath and quit the police force. Rafe (Galen Gering) and Roman (Josh Taylor) will eventually convince Hope to stick around, but that won’t solve their problems. When Aiden starts digging for info on Stefano’s (Joseph Mascolo) murder, stunning proof could surface.
Meanwhile, Victor (John Aniston) will come home to Maggie (Suzanne Rogers) after being released on bail. They’ll have a lot to talk about. Maggie’s recovery will be moving right along, which is fantastic news.

Of course, they’ll have to address the elephant in the room sooner or later. Victor has been accused of kidnapping Tate and Maggie may wonder if he’s keeping anything from her. “Days of Our Lives” fans know that several fingers are currently pointed at Victor.

Victor may have some secrets, but someone else was definitely involved in the abduction. “Days” rumors suggest that this mystery will conclude with a few shockers. Next week, Deimos and Victor will team up to catch the person responsible for snatching Tate.

It sounds like these brothers will take care of business. We’ll give you updates as details emerge on their trap. Stay tuned to DOOL and don’t forget to check Soap Opera Spy often for the latest “Days of Our Lives” spoilers, rumors, updates and news.