‘Days Of Our Lives’ Spoilers: After Aiden Appointed The DA – Hope Wants To Quit The Police Force 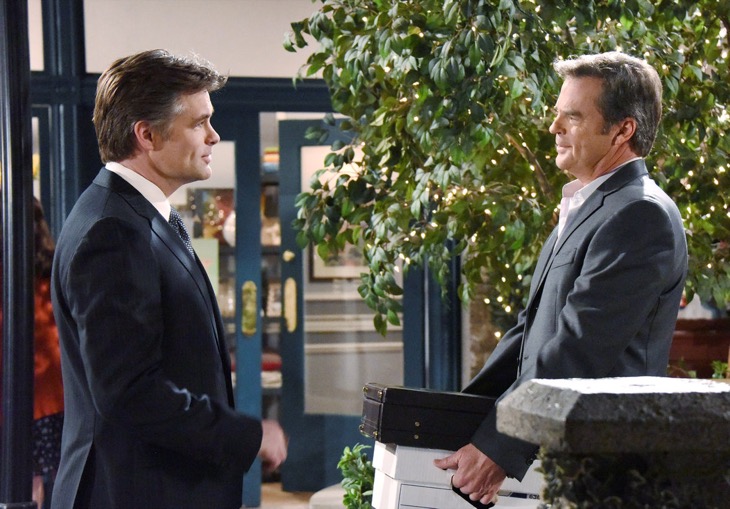 ‘Days Of Our Lives’ (DOOL) spoilers reveal that Hope (Kristian Alfonso) is furious that Aiden (Daniel Cosgrove) is the new D.A. She goes to him at the station and talks to him about how he took the job from Justin (Wally Kurth). Aiden tells her that they will have to be amicable with each other now that he’s the D.A. Hope is upset by his behavior and has to control herself now that he’s her superior.

Hope complains to Rafe (Galen Gering) and Roman (Josh Taylor) about Aiden being in charge. Rafe sympathizes with Hope’s anger. Hope is upset that Aiden will be in charge of her cases in addition to being around her all of the time. This make Hope upset enough to want to quit the force. Rafe advises Hope that she shouldn’t walk away from the force. Rafe gets Justin’s help to talk Hope into keeping her job.

Hope grills Justin about Aiden being able to take his job from him. Hope and Rafe have a hard time believing that Aiden would be able to take Justin’s job so easily. They want to know what Aiden had on him in order to take his job. They want answers to their questions. Justin explains what happened, but they don’t understand what’s going on with him. They are confused by what Justin told them. What Justin tells them isn’t enough to justify him getting fired and being replaced by Aiden. Hope and Rafe become more suspicious about Aiden replacing Justin.

Rafe tries again to convince Hope not to quit her job. He feels it would be better for her to stay on the force and know what’s going on with Aiden. Rafe has a feeling that Aiden will find out how Stefano was really killed. This will be the worst thing that could happen because he will have leverage over Hope. The detectives could lose everything so they will have to be careful when it concerns keeping an eye on Aiden. They have work hard to find out what’s going on with Aiden.

Hope listens to what Rafe says and decides to stay on the force. Will the detectives find out how Aiden got the D.A. position? Will Aiden get closer to finding out what really happened to Stefano? If he does find out, will he use the information to get revenge on Hope and Rafe?

‘The Young and The Restless’ Poll: Who Was The Best Adam Newman – Justin Hartley or Michael Muhney? VOTE!