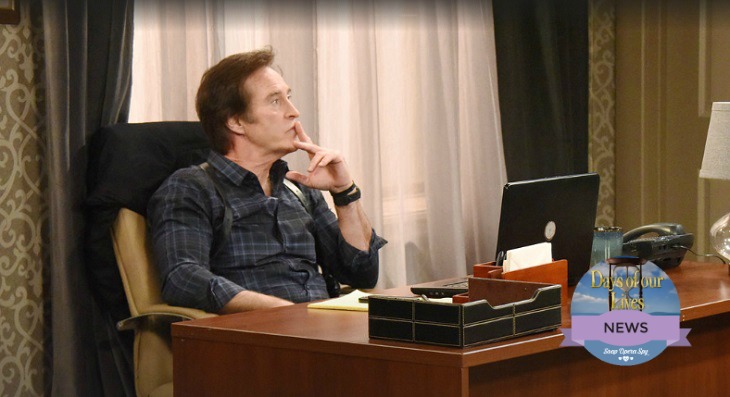 “Days of Our Lives” spoilers for Thursday, October 13, tease that Adrienne (Judi Evans) will rip into Andre (Thaao Penghlis) for his betrayal. She’ll insist that he’s a monster for shooting Chad (Billy Flynn) and pointing Clyde (James Read) in the baby’s direction. Of course, there’s much more to the story. Andre hasn’t betrayed Chad at all.

Once he’s certain that the coast is clear, Chad will reveal that he’s perfectly fine. This was simply a trap to secure Clyde’s capture. “Days of Our Lives” spoilers say Lucas (Bryan Dattilo) and Adrienne will be angry that they were kept out of the loop. However, Andre and Chad probably thought they could pull off their parts a little better if they were in the dark.

Regardless, at least Adrienne and Lucas can start to relax. They’ll learn that Thomas is safe at another location. DOOL spoilers say Clyde will be stunned when he doesn’t find a baby in that crib, but the real shock will come when the cops arrive. Clyde will quickly discover that he’s been duped.

“Days” fans can expect some strong words to be exchanged before Clyde is led away. Clyde will hope that Orpheus (George DelHoyo) truly hates Salem enough to kill every last one of them. It might be Clyde’s best shot at vengeance at this point.

Deimos (Vincent Irizarry) also seems to be working on a setup. He offered to bring Theresa (Jen Lilley) to Xander (Paul Telfer), but it’s doubtful that he really intends on fulfilling his end of the bargain. Deimos may have a few tricks up his sleeve, but he’ll need to stay on guard. Xander doesn’t like deception and this could backfire if Deimos isn’t careful.

Elsewhere, “Days of Our Lives” spoilers indicate that Marlena (Deidre Hall) and John (Drake Hogestyn) will have some concerns about their plot. They want to bring down the villains and it looks like two of them are already being taken care of. That still leaves Orpheus, who is perhaps the most vicious of them all.

John will call Orpheus to offer himself in exchange for the safety of Salem. He’ll argue that Orpheus needs to accept this deal and leave the rest of the town alone. Naturally, Orpheus will decide to play by his own rules. John will have to think fast when things don’t go as planned.

“Days” rumors hint that more peril is on the way. We’ll give you updates as other news comes in. Stick with DOOL and don’t forget to check Soap Opera Spy often for the latest “Days of Our Lives” spoilers, rumors, updates and news.

‘The Young And The Restless’ News: Chrishell Stause And Justin Hartley’s Engagement Party Looks Like A Blast – Photos Here!