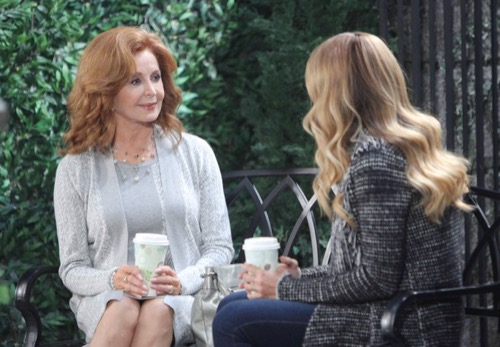 “Days of Our Lives” spoilers for Thursday, March 24, tease that Adriana (Alma Delfina) will explode with fury over Eduardo’s (A Martinez) actions. Eduardo abandoned his family and Adriana’s anger has been building for years. She’ll finally be able to release some of that rage.

Of course, Adriana will also realize that Eduardo is to blame for her kidnapping. She’ll learn Eduardo was an assassin who put his relatives in danger. On top of that, Adriana will likely find out that Eduardo had another family he ditched. He never stepped up for Eve (Kassie DePaiva) and Paige (True O’Brien) either.

DOOL spoilers indicate that things will get heated as Rafe (Galen Gering) and Dario (Jordi Vilasuso) chime in. Gabi (Camila Banus) still seems determined to give Eduardo a second chance, so maybe she’ll be the one to settle her mother and brothers down. Stay tuned to “Days of Our Lives” for updates on the Hernandez family drama.

Later, Dario will stir up more trouble during a conversation with Summer (Marie Wilson). “Days” viewers know that Dario and Summer have worked on con jobs together in the past. Dario thinks Summer has been given the perfect opportunity to mooch off Maggie (Suzanne Rogers). Since Summer’s DNA test proved she was Maggie’s daughter, Dario feels like she doesn’t even have to pull a scam this time.

“Days of Our Lives” spoilers say Dario will pressure Summer to exploit Maggie and live the good life. This sounds pretty suspicious. Dario and Summer are friends, but why does he care about this so much? DOOL rumors hint that Dario may be working for Deimos (Vincent Irizarry).

Could Dario have set all of this in motion thanks to Deimos’ orders? It’s a possibility to consider. There’s even a chance that Dario faked the DNA test. We just don’t know yet. It looks like this storyline could be a wild ride. In the meantime, Maggie will open up to Victor (John Aniston) about her long-lost daughter.

Victor won’t be pleased by the news. When Victor smells a rat, he’ll urge Maggie not to trust Summer. Are Victor’s instincts accurate? It’s clear that something strange is going on. Stick with the NBC soap to see if Summer will cause big problems for Maggie.

So “Days” fans, what do you think about Adriana so far? Are you enjoying the additions to the Hernandez family? Could Dario be hiding something from Summer? Will Maggie end up getting hurt? Voice your opinion in the comments below and don’t forget to check Soap Opera Spy often for the latest “Days of Our Lives” spoilers, rumors, updates and news.

‘The Young and the Restless’ News: Tracey Bregman to Launch New Jewelry Line