‘Days Of Our Lives’ Spoilers: The Prisoners Wreak Havoc – Which Salemite Will Be Killed? 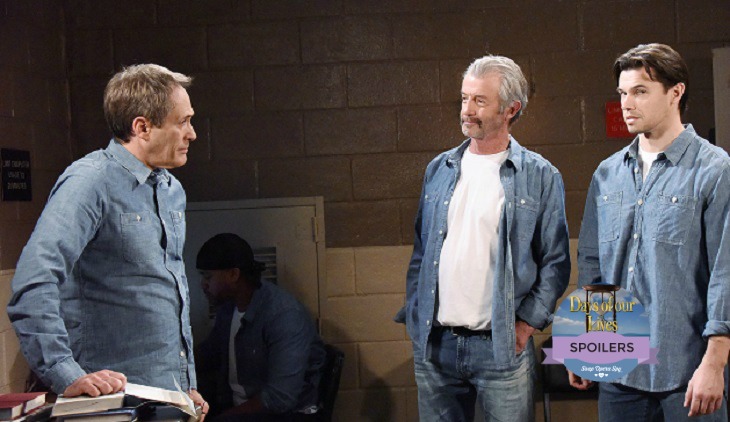 There’s going to be a lot of action coming up on Days Of Our Lives. The drama starts with the prison outbreak. Xander (Paul Telfer), Clyde (James Read), and Orpheus (George DelHoyo) are back in Salem to get revenge on the people who did them wrong. Unfortunately for one of the Salemites, this may be the end of one of their lives. Which one is possibly going to die at the hands of the prisoners?

As Days fans know, the convicts show up and ruin Brady (Eric Martsolf) and Theresa’s (Jen Lilley) wedding. They plan to kill one of the people at the wedding. Theresa may be the person that dies at the wedding. Xander has stated many times that he wanted to kill Theresa as well as Nicole (Ari Zuker). Theresa is leaving the show so it’s a strong possibility that she is the one who could be dying. According to spoilers, Xander is going to choke her. Brady may not be able to save her. This could be how the writers are writing her out of the show.

Another possible victim is Chad (Billy Flynn). Clyde wants to get back at Kate (Lauren Koslow) and tries to shoot her. Chad sees what happens and tries to save her life. Clyde may end up killing him instead of Kate. Would it really be an accident since Chad and Clyde hate each other? Clyde holds Chad responsible for his son being arrested and for him losing his family. Chad may also end up killing Clyde because of losing his wife. Chad isn’t within his right frame of mind so he could snap and kill Clyde.

Orpheus also has a plan to kill someone. Spoilers tease that Orpheus shoots his gun towards Victor (John Aniston). Like Kate, Victor has a hero who tries to save his life. His hero turns out to be John (Drake Hogestyn). John thinks fast in order to save Victor’s life and ends up getting shot. Will John end up dying from the shot? It’s been reported that Drake is leaving the show for a while. Is this how he is being written out of the show?  Let us know what you think in the comments below and don’t forget to check Soap Opera Spy for all of your DOOL spoilers and news.

‘The Young And The Restless’ Spoilers: Chelsea Oblivious To Chloe’s True Colors, When Will Truth Come Out?