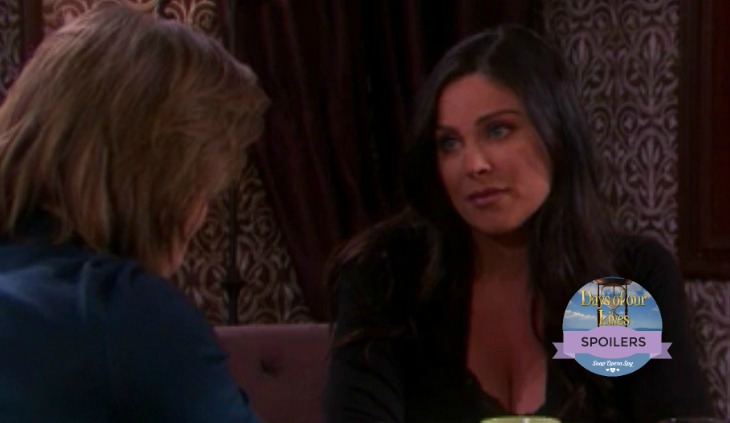 “Days of Our Lives” spoilers tease that Chloe (Nadia Bjorlin) will try to figure out what her next move should be. She just learned she’s pregnant and now she isn’t certain that she wants to keep the baby. The fact that Deimos (Vincent Irizarry) is the father is quite unsettling. Chloe doesn’t trust him and she’s not sure what will happen if she reveals the truth.

That’s where Philip (John-Paul Lavoisier) comes in. He’ll make a surprising suggestion and push Chloe to truly consider it. “Days of Our Lives” spoilers indicate that Philip will ask Chloe to marry him. He’ll insist that he’s willing to step up and pose as the “baby daddy.” Chloe will undoubtedly think it’s a crazy idea at first, but Philip will urge Chloe to hear him out.

Chloe and Philip’s romance is a significant part of DOOL history. It’s obvious that they still care about each other and there’s definitely some chemistry between them. If Chloe is going to keep this baby, she’ll have to make some tough choices. Chloe will need to decide whether she’s going to give Deimos updates on his child or go with Philip’s plan instead.

“Days” spoilers say Philip will feel like Deimos carries too much risk. He’ll think Chloe needs another believable option as the father. Philip will suggest that they can pass the baby off as his and no one will ever know the difference. Chloe will wonder if it’s the right thing to do, but she’ll probably admit that this deal sounds tempting. There’s a good chance she’ll accept the offer.

Meanwhile, Deimos and Nicole (Arianne Zucker) will grow closer. They’ll make love again and Deimos will ask Nicole to move in with him. He’s already made it clear that he wants marriage to be in their future, but he at least wants Nicole to make a home with him. Nicole has concerns, but she can’t seem to control her dangerous desires.

“Days of Our Lives” spoilers state that Nicole will eventually find out Chloe is pregnant. She’ll be stunned by the news and demand to know if Deimos is the father. Chloe will most likely blurt out that her child belongs to Philip. However, you can bet that the real story will come out sooner or later.

DOOL rumors hint that this shocking revelation will make waves for Nicole and Deimos down the road. “Days” fans will want to check out all of the drama ahead. Stay tuned and don’t forget to visit Soap Opera Spy often for the latest “Days of Our Lives” spoilers, rumors, updates and news.