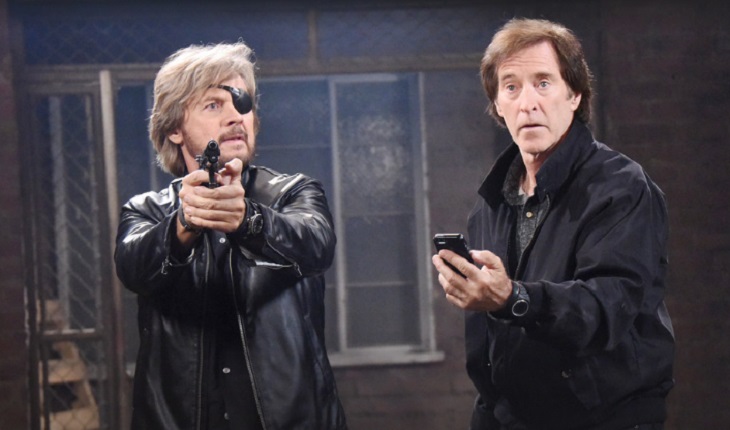 “Days of Our Lives” spoilers for Monday, October 10, tease that Marlena (Deidre Hall) will explain her plan to John (Drake Hogestyn). He’ll think “Doc” has a brilliant idea. We don’t know the details of this scheme just yet, but it must be good. Marlena has been working nonstop to find out the motives and weaknesses of the villains. She’s come up with a way to stop them once and for all.

Of course, Marlena and John are going to need some assistance. They can’t take down Orpheus (George DelHoyo), Clyde (James Read) and Xander (Paul Telfer) without backup. Steve (Stephen Nichols) and Kayla (Mary Beth Evans) will be first in line to help. They managed to get Joey (James Lastovic) home safely, but they know the threat isn’t over. It’s time to restore order in Salem.

Related: Is Alison Sweeney Returning To ‘DOOL’ In 2017 As Sami Brady?

“Days of Our Lives” spoilers reveal that other Salemites will also pitch in. Marlena will hope to build a huge team to put this plot in motion. Kayla and Steve will try to secure some bait for Clyde. They’ll ask Chad (Billy Flynn) and Kate (Lauren Koslow) to lure Clyde to a specific location.

Chad won’t believe that’s their best option. Clyde is an extremely dangerous man and he’s already gone after Kate once. Chad won’t want to Kate to face that kind of peril again. It’s just too risky. Chad would rather work with Andre (Thaao Penghlis) to come up with a different solution.

That sounds pretty risky as well, but it’s better than the alternative. Andre is a villain himself, so he knows how to handle these guys. Later, DOOL spoilers state that Adrienne (Judi Evans) and Lucas (Bryan Dattilo) will get involved. They’ll have some doubts, but they’ll likely put them aside. Everyone is determined to end the fugitives’ reign of terror.

Meanwhile, “Days” spoilers say Theresa (Jen Lilley) will be freaking out. She’s been on edge ever since she first heard the escape news. Xander nearly killed Theresa on her wedding day and she’s worried that he might take another shot at revenge. The pressure will begin to take a toll on Theresa as she fears for Tate, Brady (Eric Martsolf) and herself.

Other “Days of Our Lives” spoilers indicate that Nicole (Arianne Zucker) will open up to Brady. She’s got a lot on her mind and she needs advice. Nicole will share some of her Deimos (Vincent Irizarry) problems and Brady will lend a sympathetic ear.

“Days” rumors hint that big things are brewing for Nicole. DOOL fans won’t want to miss the twists that are in store. We’ll give you updates as more info comes in. Stay tuned and don’t forget to check Soap Opera Spy often for the latest “Days of Our Lives” spoilers, rumors, updates and news.