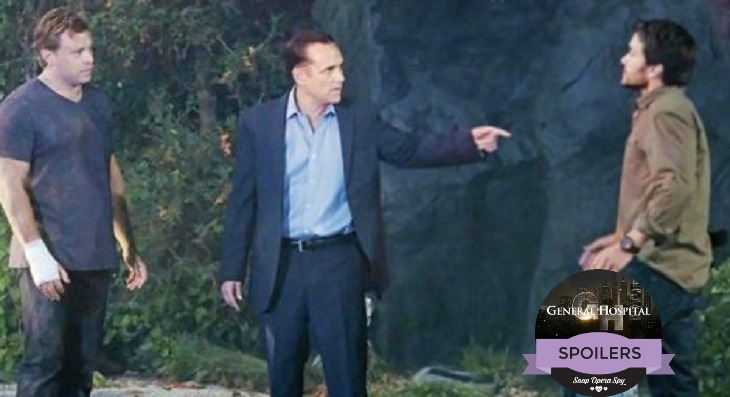 General Hospital (GH) spoilers for Monday, October 10, 2016 show Sonny Corinthos (Maurice Benard) ask his wife, Carly (Laura Wright), if she would believe him if he told her it was all going to work out?    Carly has been very anxious and angry with Sonny recently when it came to an impending mob war with Julian Jerome (William DeVry), but Sonny has reassured her, he would not harm Julian.

General Hospital’s Julian is at The Floating Rib with his sister, Ava Jerome (Maura West) and his lawyer, Scott Baldwin (Kin Shriner), when Julian’s body guard approaches him about his car being stolen.  Julian isn’t too concerned about it, he tells him that he wouldn’t put it passed Sonny, who would do anything to give him a hard time.

Related: Will Nick Stabile Return To ‘GH’ As Nikolas Cassadine?

General Hospital spoilers continue when Hayden Barnes (Rebecca Budig) and Dr. Hamilton Finn (Michael Easton) inform board member, and prominent Port Charles resident, Tracy Quartermaine (Jane Elliot) that it seems General Hospital is for sale.  Viewers know how passionate Tracy is about the hospital, do you think she will buy the hospital out, or will this be the end?

GH’s molly Lansing Davis (Haley Pullos) meets with her boyfriend, TJ Ashford (Tequan Richmond) at The Floating Rib, where she not only finds out that her cousin, Morgan Corinthos (Bryan Craig) was drunk, and punched TJ after TJ tried to prevent him from driving, but he also stole crime lord, Julian Jerome’s car.  Molly asks the fatal question, “Can this night get any worse?”  Fans know that of course they can, and they have!

Related: The ‘GH’ Killer May Have Been Caught, But Paul Hornsby Still Has Tricks Up His Sleeve

General Hospital’s newest resident, Nelle Hayes (Chloe Lanier) meets with Kiki Jerome (Hayley Erin) at the Metro Court, where Nelle tells Kiki that Morgan believes she was breaking up with him, after Morgan had caught her cheating on him.  Clearly, Kiki has no clue what he was talking about, but viewers now know he saw Ned Ashton (Wally Kurth) and Olivia Falconeri (LoCicero) in the Quartermaine Boat House, and not Kiki and Dillon (Robert Palmer Watkins).

Jason Morgan seems to be jumping into his old General Hospital role more and more.  First he intervenes when Julian threatens Carly, and when he learns of the predicament Morgan has gotten himself into.  Jason jumps into action to save Morgan.  Will he find him badly injured, or will there be more to this story?

Be sure to watch ABC’s General Hospital on Monday, October 10, 2016 and check Soap Opera Spy often for updates, news, rumors and spoilers!