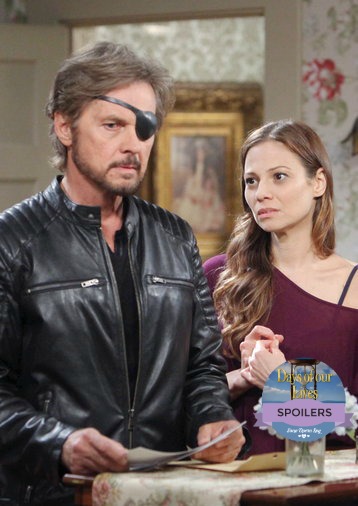 “Days of Our Lives” spoilers tease that Steve (Stephen Nichols) will find out Kayla (Mary Beth Evans) is missing. Naturally, Steve will suspect that Ava (Tamara Braun) had something to do with it. DOOL viewers know that Ava knocked Kayla out with a candlestick and is apparently holding her hostage somewhere. Since Kayla was supposed to be out of town anyway, Ava’s new plan seemed to be working out beautifully.

Of course, it was only a matter of time before Steve got a clue. “Days” spoilers say Steve will confront Ava and demand to know where she’s keeping Kayla. Ava will probably try to deny that she was involved in Kayla’s disappearance, but Steve will continue to press for answers.

Ava will eventually admit she knows Kayla’s location. However, Steve will have to meet some demands if he ever wants to see Kayla again. “Days of Our Lives” spoilers indicate that Ava will use the situation to her advantage. She’ll realize that Kayla can serve as a powerful motivator for Steve.

Before she spills the details on Kayla, Ava will force Steve to find the child she told him about. Steve has already been considering the search, but Ava will use her newfound control to send him off right away. In fact, it looks like Ava will want to come along on this adventure.

As for Joey (James Lastovic), he’ll try to cope with his broken heart. Joey thinks he’s in love with Ava and he took the news of her impending death pretty hard. Things should get much worse when Joey learns Ava has been playing him the entire time. On top of that, Joey inadvertently helped Ava set up her scheme.

Ava will say she’ll give Joey the info on Kayla’s whereabouts as soon as Steve fulfills his end of the bargain. DOOL rumors hint that Ava’s plot will include some major twists and turns. Stick with “Days of Our Lives” for updates on the chaos Ava has in store.

So “Days” fans, what do you think about Steve’s shocking realization about Kayla? Will Steve be forced to search for the child in exchange for Kayla’s freedom? Will Joey get even more tangled up in all of this? Voice your opinion in the comments below and don’t forget to check Soap Opera Spy often for the latest “Days of Our Lives” spoilers, rumors, updates and news.