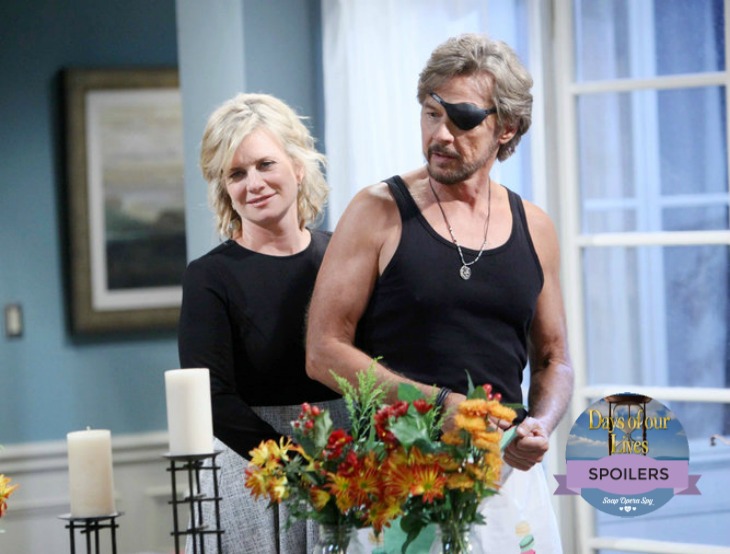 “Days of Our Lives” spoilers for Monday, April 11, tease that Chad (Billy Flynn) will be in for a big surprise. Once Chad sees Abigail’s (Kate Mansi) handiwork, he’ll be stunned. Chad will find Abigail standing next to a burning Ben (Robert Scott Wilson). His top priority will be making sure that Abigail and Thomas are safe. After they’re out of danger, the fire will be extinguished and Ben will be apprehended by police.

DOOL spoilers reveal that Chad will be concerned about Abigail’s mental state. He’ll turn to Marlena (Deidre Hall) as he tries to figure out what to do for his wife. Marlena will offer her best advice and Chad will try to help Abigail in any way he can. That includes covering up Abby’s role in the blaze.

Meanwhile, “Days of Our Lives” spoilers say Kayla (Mary Beth Evans) will get checked out at the hospital. When we last saw Kayla, she had passed out on the floor near the main desk. Fynn (Alexander Bruszt) will run a few tests and determine that Kayla has a subdural hematoma. Basically, it means blood has accumulated between the brain and its outer lining.

This condition is typically associated with traumatic brain injury. “Days” viewers know that Ava (Tamara Braun) whacked Kayla in the head with a candlestick before she locked her up. There’s a good chance this subdural hematoma is a result of the blow.

Once Steve (Stephen Nichols) gets updates on Kayla’s diagnosis, he’ll be worried sick. Steve loves “Sweetness” and he’ll want to support her. DOOL spoilers indicate that Steve and Kayla will remember their great love story. They have quite a past together and we’ll get an opportunity to recall some of it through flashbacks.

You Might Also Like —>  Abigail Seduces Ben, Sets Him on Fire – Lucas Finds Drugged-Up Jennifer – Nicole Uncovers Details About Deimos

Will Steve and Kayla bond during this time of crisis? We’ll have to wait and see, but the rumors hint that “Stayla” will reunite before you know it. Stick with “Days of Our Lives” to see what’s next for this couple.

So “Days” fans, what do you think about the news that Chad will cover up Abigail’s actions? Is Abigail headed down a dark road? What about Kayla’s brain injury? Will she accept Steve’s support? Voice your opinion in the comments below and don’t forget to check Soap Opera Spy often for the latest “Days of Our Lives” spoilers, rumors, updates and news.