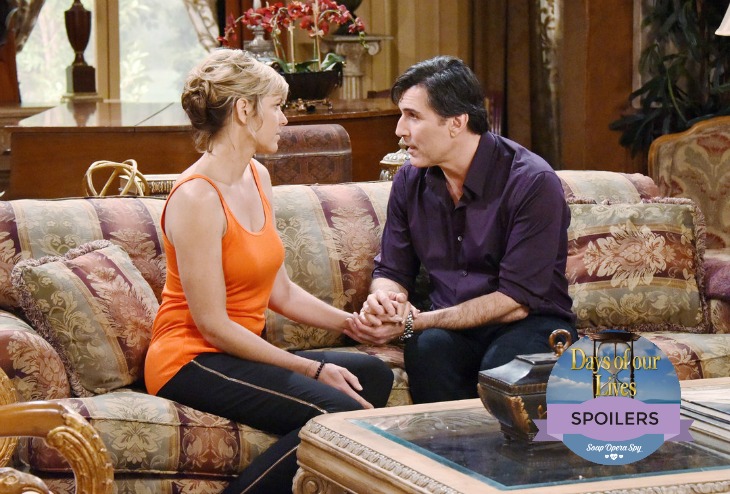 “Days of Our Lives” spoilers for Friday, August 26, tease that Victor (John Aniston) will get grilled at the police station. Brady (Eric Martsolf) feels certain that Victor is the one who took Tate and he wants him to pay the price. However, Victor will insist that he’s innocent. He’ll try to make the cops believe that this is all an elaborate setup.

Victor will assure them that Deimos (Vincent Irizarry) was responsible, but it may not be that simple. Deimos has been trying to make amends with his brother and win Nicole (Arianne Zucker) over. Would he jeopardize everything by stirring up more trouble?

Plus, we know Victor is guilty on some level. Caroline’s (Peggy McCay) shocking vision clued us in on that. Even if Victor isn’t the kidnapper, he’s lying about something. Deimos will be under suspicion, but he’ll promise Nicole that he’ll do everything he can to get Victor off the hook.

You Might Also Like —> Kassie DePaiva Opens Up About Acute Myeloid Leukemia Diagnosis And Hospitalization, ‘DOOL’ Return Will Be Brief

Later, Nicole and Deimos will face off with an old foe. “Days of Our Lives” spoilers indicate that they’ll have a stressful showdown with Kate (Lauren Koslow). After several insults and accusations are thrown around, Kate will head on her way. She has sneaky plans and we’ll see how those work out for her in the coming weeks.

Meanwhile, Brady will spend some time bonding with Theresa (Jen Lilley). Now that they’ve reunited with Tate, their family is complete again. Brady will have nagging questions regarding Victor’s role in the kidnapping, but he’ll try to put those out of his mind. Theresa and Brady will soon focus on wedding planning. They still have a lot to do before their big day.

“Days” spoilers reveal that Brady and Theresa’s nuptials will go horribly wrong thanks to an epic prison break. Xander (Paul Telfer) will target Theresa for accusing him of attempted rape and sending him to the slammer. Orpheus (George DelHoyo) and Clyde (James Read) will cause chaos, too. DOOL viewers won’t want to miss all of the action ahead.

Until then, we’ll see Philip (John-Paul Lavoisier) put pressure on Chloe (Nadia Bjorlin). He recently offered to pose as Chloe’s “baby daddy” and he’s ready for an answer. “Days of Our Lives” spoilers say Chloe will eventually make her decision. She’ll agree to the charade in hopes of protecting her child from Deimos and the danger that surrounds him.

Of course, this scheme is going to come with complications. Once Deimos gets updates on Chloe’s pregnancy, he’ll wonder if she’s lying about the father. “Days” rumors suggest that Deimos’ investigation could lead to some huge news. Stay tuned to DOOL and don’t forget to check Soap Opera Spy often for the latest “Days of Our Lives” spoilers, rumors, updates and news.