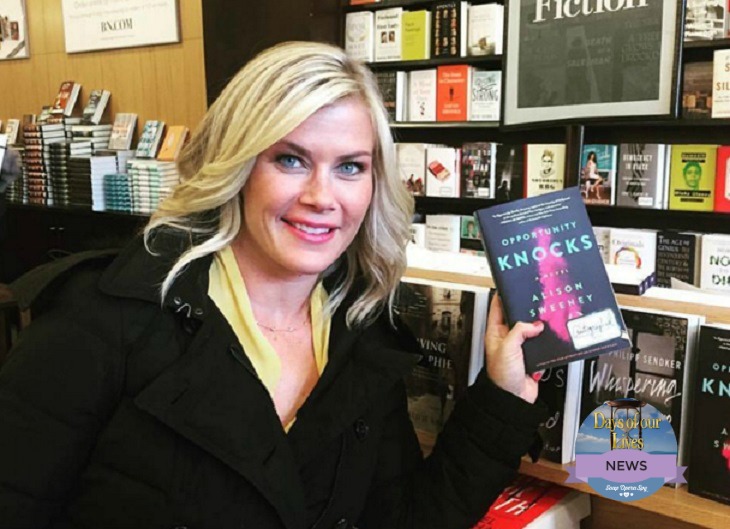 Former ‘Days of Our Lives’ star Alison Sweeney, is quite busy these days. Over the past couple months she has made several appearances on a couple shows. The latest of these is an appearance on ‘The Celebrity Name Game’. Sweeney sent to this message out to fans via social media, “Tune in May 5th to @CelebNameGame and catch me and my competitive side in action. 😉 Air times here: http://www.celebnamegame.com”.

Sweeney is most well known for playing the role of Sami Brady on Days for almost 3 decades, having acquired the role in 1987 and leaving in 2015. Since her exit in 2015 she has made few appearances on the show. Although several viewers are hoping she will return full time to the show, Sweeney is busy booking other projects. It was just recently revealed that she began shooting for the upcoming installment of ‘Murder She Baked’ with former daytime star Cameron Mathison (Ex-Ryan, All My Children).

A part from being well established in the soap opera genre, Sweeney became well known for being the host of ‘The Biggest Loser’. She hosted this series for a number of years, from 2007 – 2015. She just released her book “Opportunity Knocks” and made an appearance on Hallmark’s ‘Home & Family.’

The Celebrity Name Game is a game show based on a board game. The games consist of two teams, they both have two contestants who are family or acquaintances and are usually accompanied by guest celebrities for assistance. The show premiered back on September 22, 2014 when it was originally released as a primetime series.  You can head over to the official website to see when the show airs in your area.

So ‘Days’ fans, are you excited to see Alison Sweeney show off her competitive side on ‘Celebrity Name Game.’