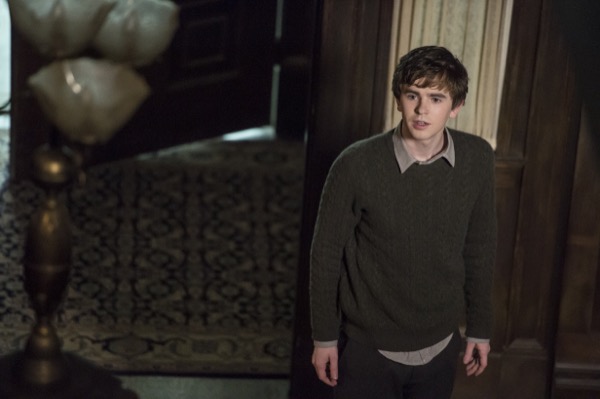 As dedicated fans of Bates Motel, we are still trying to come to grips with the death of our beloved MOTHER, Norma Bates (Vera Farmiga).  Throughout last season, we watched as Norman (Freddie Highmore) transitioned from a troubled teen into a total and complete psycho; devastating us in the finale when he killed his mother in a murder/suicide that went horribly wrong.

Norman’s obsession with his mother runs so deep that he even dug up her body and brought her back to the home they share. It seems that even in death, Norma will still be around, whether it’s solely in Norman’s mind or also with Romero (Nestor Carbonell), this is great news for fans of Vera Farminga!

Since season five will also be the final season, we will have to see how other storylines play out and where characters will end up.

Will Sheriff Romero survive?  He has been arrested for his involvement in Bob Paris’ criminal activity.  He may have done some bad things, but fans love him.  Unfortunately, to Norman, he is a loose end; especially after he promised to prove that Norman killed his beloved Norma.  Romero isn’t the only loose end, though, what about Dylan (Max Thieriot) and Emma (Olivia Cooke)?

Dylan doesn’t know that Norma is dead yet, how will he react?  Will he leave his life, with Emma, in Seattle to come help Norman? How about Norma’s brother, and Dylan’s father, Caleb (Kenny Johnson)?  Norma and Caleb shared a very cryptic phone call recently, is it possible he will return in the final season?

Diehard fans of Alfred Hitchcock’s 1960 movie “Psycho”, will be thrilled to finally be introduced to the character Marion Crane, who is best known for being the woman (Janet Leigh) that Norman kills in one of the most iconic horror film scenes ever!!  “Bates Motel” is going to be completely insane in this final season, are you ready to be creeped out?

‘The Young and The Restless’ Spoilers: Will Personal History Enable Chelsea to Renew Friendship with Chloe?

‘The Young And The Restless’ News: Greg Rikaart Shares Photo and Video of Michael Graziadei Back At Y&R