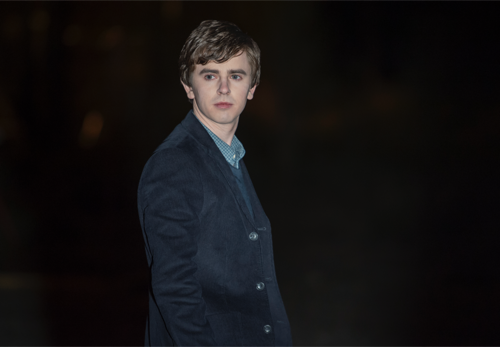 There will be little left to the imagination during the series finale of ‘Bates Motel.’ Many of the show’s main characters will return to the canvas, including Norma’s brother Caleb. Executive producer Kerry Ehrin knows viewers are aware of how the series will end.

According to an interview with Deadline, showrunner Kerry Ehrin decided to bring Freddie Highmore into the writers’ room “later on in the game, once the overall season arc had been broken.” Freddie hints that while ‘Bates Motel’ may be ending the writers do not “necessarily see the show ending with Marion Crane pulling up to the house.”

The writers “have guideposts and we know the destination. How exactly we’re going to there…that’s kind of the fun of writing, and that’s what we’ll be doing when we get back in the writer’s room.”

Freddie Highmore has become part of that writing team in some small capacity. Not only has Freddie been welcomed into the writers’ room for ‘Bates Motel’ the Cambridge-educated actor has sold a pilot to the British television network Sky. He has also penned another television pilot with Kerry Ehrin.

There will be a wait for the series finale of ‘Bates Motel’ on A&E but with Freddie Highmore in front of and behind the camera, it will be more than worth it.