‘The Young and the Restless’ (Y&R) Spoilers: Jack and Marco Explosive Confrontation – Will Someone Die? 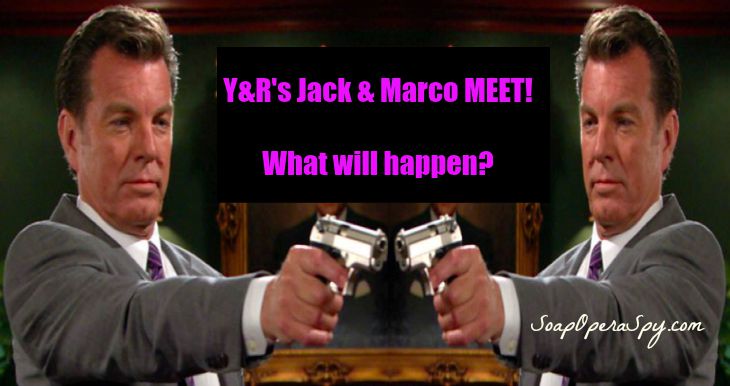 Most “The Young and the Restless” fans are in agreement; they hope the Marco/Jack (Peter Bergman) storyline goes away, and fast. Soap Opera Digest reported in the Aug. 24th edition that it is going to be pretty difficult to get rid of Marco. He wants to take over Jack’s life permanently and he is getting pretty good at pretending to be him. Is it possible he could fool Phyllis (Gina Tognoni) into thinking he is Jack, again?

Marissa (Sofia Pernas) and Noah (Robert Adamson) spot what they believe to be Jack in the park. Marissa approaches him, but something seems off about him. She begins to think that it is probably Marco trying to take over Jack’s life again but isn’t completely sure. Marissa begins to feel compelled to tell Jack her suspicions about Marco posing as him again. Even though she hasn’t known Jack for very long, she feels a deep connection to him after everything they had been through together.

Related: ‘The Young and the Restless’ RUMORS: Y&R Sharon Case Has Miscarriage and Steals Sage’s Baby

Her suspicions are confirmed the next day at the Underground. She runs into ‘Jack’ and is convinced that it is really Marco. It occurs to her where he is probably hiding – the Abbott cabin. Against her better judgement, she decides to go to the cabin alone. She wants to confront Marco and convince him to leave these nice people alone.

She is not afraid of Marco because she knows he would never hurt her. She was confident he will be happy to see her. When she arrived, he started outlining to her how he was going to take over Jack’s life again. She tries to convince him at the cabin to run away from her. She is willing to tell him whatever she needs to get him away from Genoa City. He refuses to leave and mumbled he wants to take over Jack’s life again and nothing is going to step in his way- not even her. When Marco turned his back, she called Jack and revealed where Marco was hiding.

Related: ‘The Young and The Restless’ News: Chuck Pratt Reveals Why Harding Had To Be The Cabin Killer

Marco is startled by a knock on the door. Jack comes in and wants to end to Marco taking over his life- ever again. Chuck Pratt revealed that the confrontation between them is like nothing you have ever seen on the show. Is it possible that Jack will kill Marco? Or, will Marco take over Jack’s life for good?

‘Days of Our Lives’ Spoilers: DOOL Clyde Viciously Attacks Aiden – Hope Insists Aiden Spend the Night at Her Home for His Safety