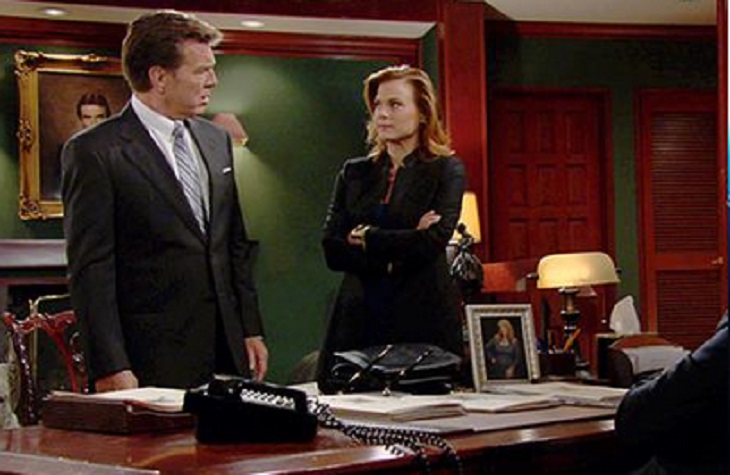 “Young and the Restless” super couple Gina Tognoni and Peter Bergman sat down with Soap Opera Digest to talk about Phyllis and Jack, working together, and meeting each other’s better half. When it was announced that Phyllis Summers would be recast, fans were upset. They couldn’t see anyone, but Michelle Stafford in the role. A year later, Gina Tognoni has personalized the role as her own.

Gina remembers when they first met a few years before. She said they briefly met, and she remembered it well. Peter said he introduced himself because he makes it his business to KNOW everyone in the business. The duo didn’t meet again until she landed the part of Phyllis Summers.

Gina recalled the screen test by calling it awkward. She said that the scene was a seduction scene. Peter told her, “We don’t have to swap spit, but it has to be believable. Your lips must touch mine.”  She ended up landing the part, despite the awkward screen test.  Peter said that Gina, and he has a mutual respect for each other. They are both hard workers and are emotionally invested in their characters in the soap.

Peter said that Jack loved Phyllis because she is different. He noted, “He is done with the society girls. Here’s a woman who gets in your face, who cannot be manipulated. There’s something raw and unprotected about Phyllis. It’s something that is outside Jack’s world that he is intoxicated by it.”

Gina said that Jack was someone whom Phyllis has looked for her whole life. She went on to say, “She is deeply in love with whom he is as a man. She believes in him and with him; she can completely be herself. They are the yin and yang. It’s a solid relationship. Jack tells her things most women would die hearing- but then again, Jack Abbott isn’t like MOST men.”

Peter and Gina both said the doppelganger storyline was extremely challenging. Peter noted those types of storylines are always more involved, but as actors, they must act the best they can with the material the amazing writing team provides them. Gina noted that Peter was an perfect Marco. He could let loose and show his true talent.

Peter noted that many actors do not run their lines before they film. He recalls a moment when Eric (Braeden) didn’t want to run his lines with him and felt like as veteran actors, they were good to go Peter said, “I don’t go in from of the cameras without running my lines at least a few times. If I have a scene with you, I will track you down to run our lines. Just deal with it.” Luckily for Peter, Gina is a hard-working actress who gives him no grief about running their lines together.

Peter said he hasn’t met Gina’s husband, Joe Chiarello yet- and noted he was looking forward to that day. Gina said it will happen when Joe comes out to L.A.  Gina met Peter’s wife, Mariellen at his 25th anniversary party a few months ago. She noted his bombshell wife was an authentic redhead, “Mines a dye job!” It should be noted their spouses are happy the two work so well on screen. Gina said, “Joe is happy that I am enjoying my work and get along with my co-stars.”

It’s clear that the two are a great duo. Gina notes after over a year of working together, she just now could make him laugh. Peter said that was not true, he’s laughed with her all along, “Gina’s in touch with her wacky side.”

‘The Young and the Restless’ (Y&R) Spoilers: Weekly Preview October 19-23 – Adam Gets a Verdict, Cane Arrested, Noah and Marisa Sizzle!