‘The Young and the Restless’ Spoilers May 8: Michael Gets Arrested, Nikki Commits Fraud, Devon and Hilary Make Love 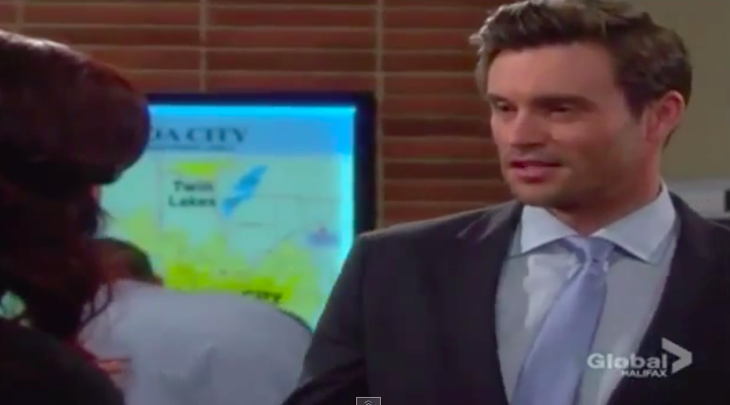 “The Young and the Restless” spoilers for May 8, 2015 reveal that Jack has succeeded in getting Neil and Nikki to go along with his fraud.  Lily reports the prostitute she sees at the Athletic Club which results in an arrest being made.  Hillary and Devon make love.

Phyllis [Gina Tognoni] is looking into the room and Ashley [Eileen Davidson] comes over and says she wants to talk to Phyllis and Kyle about the company because there may not be an Abbott Newman anymore. 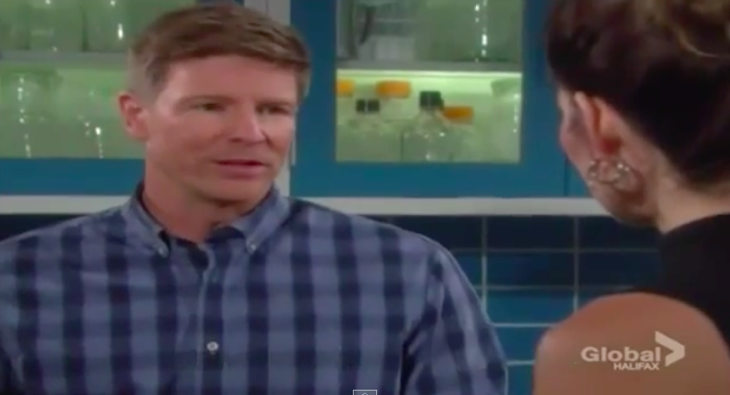 Billy [Burgess Jenkins] comes to see Victoria [Amelia Heinle] she gives him her sympathy about Jack. Billy wants answers from Victoria. He tells Victoria they cannot find a copy of the merger contract, there is no sign of it and Billy wonders if it was ever signed?

Victor [Eric Braeden] has the forged contact signed and Neil [Kristoff St.John] tells him it is not enough. Nikki [Melody Thomas Scott] comes in, she is sick about Jack – Victor tells Nikki he needs her help. 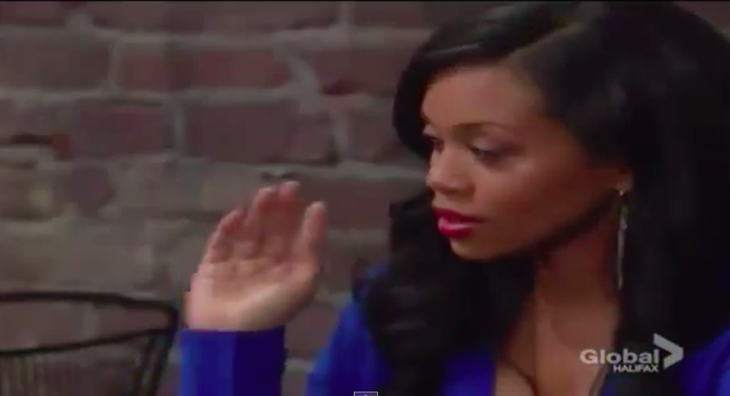 Hilary [Mishael Morgan] is happy because she beat Devon [Bryton James] at tennis. Devon implies he lost to her on purpose. Devon lost to distract Hilary because of Mother’s Day. She tells Devon she loves him and he says he loves when she says that.

Lauren [Tracy E. Bregman] is at the Athletic Club with Cane [Daniel Goddard] she is telling him her woes.

Michael [Christian LeBlanc] thanks Felicity (Call girl) [Lindsey McKeon] – she agrees not to repeat what he told her. She wishes him luck. He gives her a tip and tells her she was worth it. She walks out and says, “If you ever want another date, contact my service.” Lily [Cristal Khalil] overhears, she calls the police.

Over at Crimson Lights Devon tells Hilary he does not want to hide anything from his family and he wants to stop doing it right away. Hilary is hesitant.

Lily comes to see Lauren and Cane she tells them she sent the police upstairs because a call girl came out of a client’s room. Lauren asks who was in the room Lily says she does not know…. At that moment the police come down with Michael in handcuffs.

Victor tells Nikki Billy and Ashley of trying to scuttle the merger. Victor gives Nikki the merger contract and asks her to sign it … Nikki is surprised she is the witness on the contract. Nikki says there is a problem she should have signed it when Jack signed.

Kyle is feeling guilty about Flack and Abby tells him to get over it.

Ashley tells Phyllis they cannot find the contract and if there is no contract, no merger. 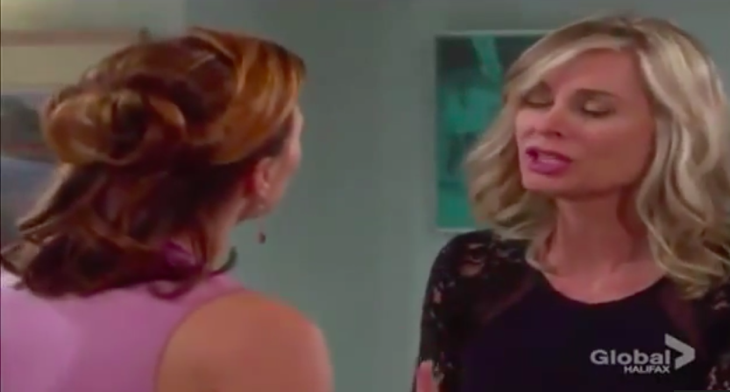 Phyllis is very angry she thinks Ashley is wishing Jack never wakes up. Ashley is upset by the accusation. She and Phyllis continue to bicker…. Ashley tells everyone she is terrified Victor is going to take over the company and she wants to see the contract. Kyle and Phyllis say they have not seen it.

Ashley goes to see Jack and tells him she is going to be doing things he won’t understand but Jabot is not just their work it is their father. 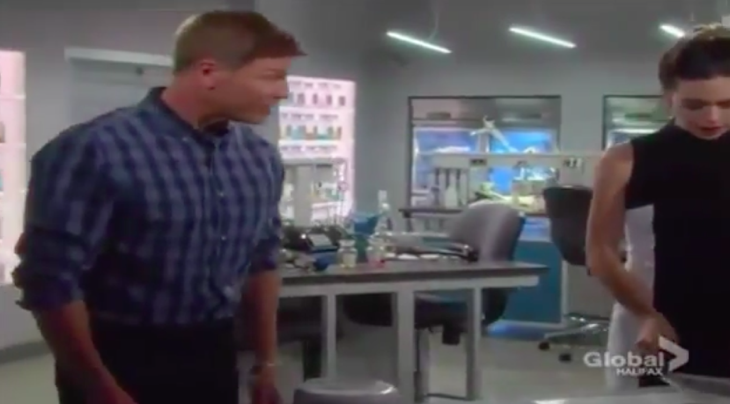 Billy says that Victoria must be happy working with her boyfriend but she tells Billy her and Ben [Sean Carrigan] broke up.

Lily is shocked Michael turned to a prostitute. Cane wishes he could help. 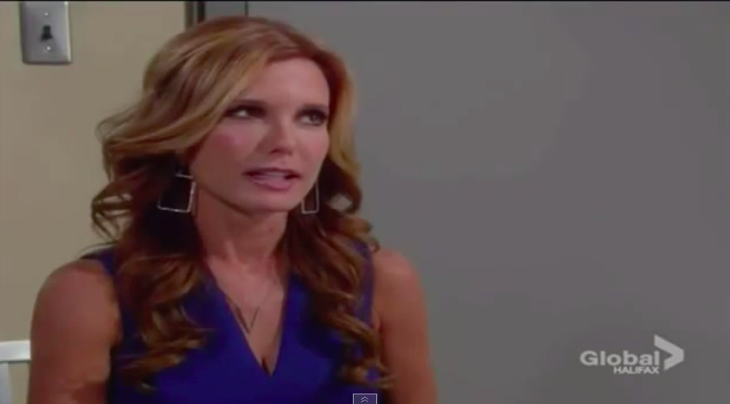 Over at the police station Lauren tells Michael she took care of his bail he should be released soon. She wants to know what the hell happened last night. Michael replies, “I paid a hooker to have sex with me last night.” She is confused. Michael asks Lauren, “What part did you not understand? I told you, I need to get away from the pressures of the relationship.” Lauren is livid because she says his cancer is their problem.. Michael says, “My Cancer, my problem!”

Devon comes in to the Athletic Club and Lily tells Devon Cane cares more about Lauren’s marriage then theirs.

Ashley has left. Abby says she understands what Ashley is saying Jack has been absent from Jabot and Victoria killed their perfume. Abby tells Phyllis there are two sides to every story.

Billy is shocked Victoria and Ben broke up and that she did not tell him. Victoria tells him she is okay and Ben has moved on with Abby [Melissa Ordway] . Billy asks Victoria to talk to Victor to see if Jack actually signed the contract. Billy trusts her because he says Victoria has integrity.

Victor tells Nikki he had planned for the 3 of them to meet but Jack Abbott came over and demanded they sign the contract right away without a witness… Nikki is hesitant. Neil tries to convince her. Victor tells her to just sign. Finally she signs.

Hilary comes in to give papers to Victor and Neil intercepts them. There is an uncomfortable silence, she leaves and Nikki asks how he keeps his hands off Hilary’s throat.

Neil tells Nikki he has not had a drink since Nikki challenged him.

Devon tells Lily that he feels she is worried about nothing, Cane is just being a good friend.

Devon tells Lily not everyone cheats and she needs to believe in her husband. Lauren walks up to their table. Devon leaves and Lily asks Lauren to sit down.

Cane comes in the police station sees Felicity he tells her Michael does not usually step outside his marriage. Felicity tells Cane that Michael did not sleep with her he just talked to her. She leaves and Cane called Michael.

Kyle asks if Phyllis hates what he did to his Dad. Phyllis tells him no she only hates what happened. Phyllis refuses to believe that Flack won’t survive.

Victoria tells Billy she is not comfortable trying to pry info from her Dad. Ashley comes in and then Victor comes in and takes out the contract and gives it to Ashley.
Hilary tells Devon she just wants to be friends with him.

Cane comes into Crimson Lights and tells Michael he knows he just talked to the prostitute. Cane wants Michael to tell Lauren the truth. Michael says he cannot he wants a separation. Lauren deserves a man who she does not have to pity.

Cane tells Lauren he spoke to Michael – and he is in a dark place and he needs time and space. Lauren cries and Cane comforts her. Lily walks in and sees.

Hilary and Devon are making love.

Neil tells Nikki he is going through hell trying to stay sober. Nikki says it is surprising but she is not tempted at all she is getting stronger and more determined each day. Neil says he is proud of her. Meanwhile Nikki looks at the bottle of alcohol.

Ashley says Victor has interesting timing – Victor says he wants to show them it is official and they can get on with Business. Billy looks at the contract and says, “That is not going to happen, because that is not Jack’s signature!”

That is it SOSers!  Can you believe that Nikki agreed to sign the merger document?  Are you as surprised as I am that Neil is going along with Victor’s fraud?  Do you think Devon’s family is going to accept he is back with Hilary?

‘The Young and the Restless’ News: Lindsey McKeon To Appear On Y&R As Michael’s Call Girl

‘Days of Our Lives’ Spoilers: Lucas Takes Down Kate – Rafe Urges Hope to Back Off Clyde – Nicole Links Xander With Serena