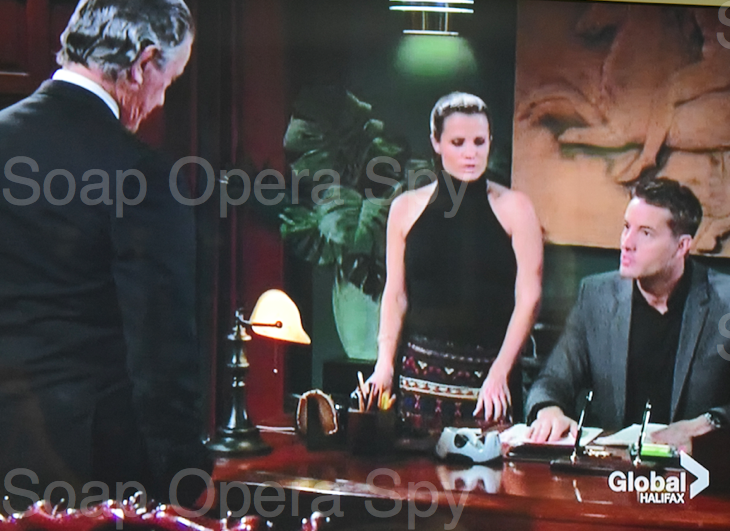 “The Young and the Restless” spoilers for Tuesday July 21, 2015 reveal that Victor is determined to get rid of Gabriel (Adam) and return as the head of Newman Abbott.  At the same time Victor is feeling that Gabriel is reminding him a lot like his son Adam.  Meanwhile, Sage gets a call from her doctor the paternity results are in.  Jack reveals to Phyllis and Billy that Gabriel Bingham is not his son. 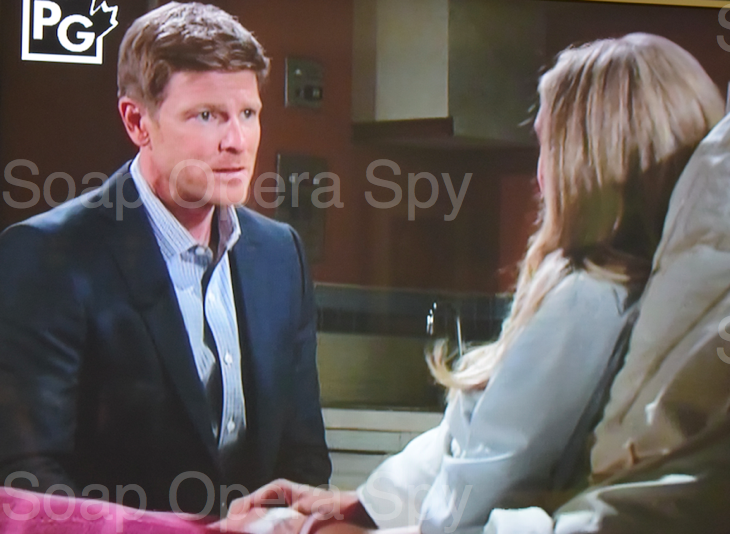 The Tuesday July 21, 2015 episode of “Y&R” opens with Billy[Burgess Jenkins] is visiting Abby[Melissa Ordway] in the hospital room and he is shocked at the terms Abby accepted. Abby insists it is the best they could do because she is an expert at reading people.

Stitch [Sean Carrigan] apologizes for telling Ashley [Eileen Davidson] he could not get her out of his mind. 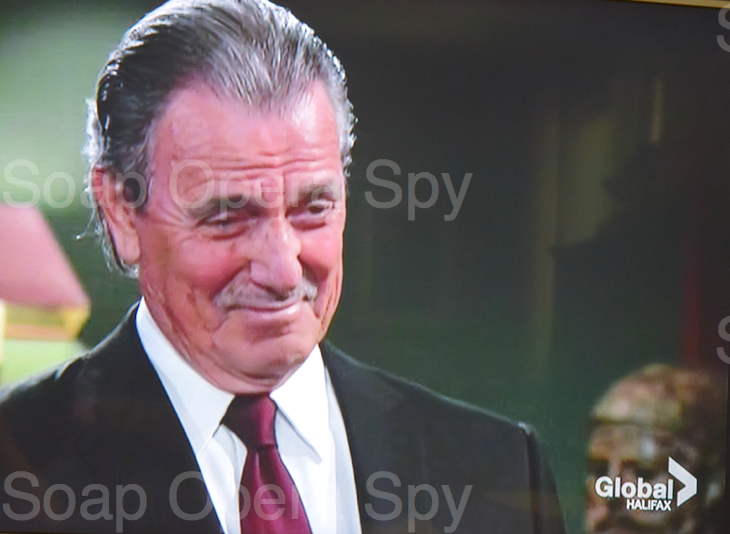 Victor [Eric Braeden] tells Adam [Justin Hartley], “Did you hear what I said? Get out of the chair and get out of the office!” Adam tells Victor he does not get why he would do that and mocks Victor. Victor asks Chelsea [Melissa Claire Egan] to leave he wants to talk to Adam. Adam tells Victor Chelsea is going nowhere and Victor says, “You don’t give the orders around here, it is my name on the door.” Adam takes out a contract, which makes him CEO and tells Victor it is his office and Victor can leave. Victor smiles.

Over at the Underground Sage [Kelly Sullivan]comes in and Nick [Joshua Morrow]says he was worrying about her. Nick tells Sage Avery [Jessica Collins] is leaving Genoa City, Sage is surprised. 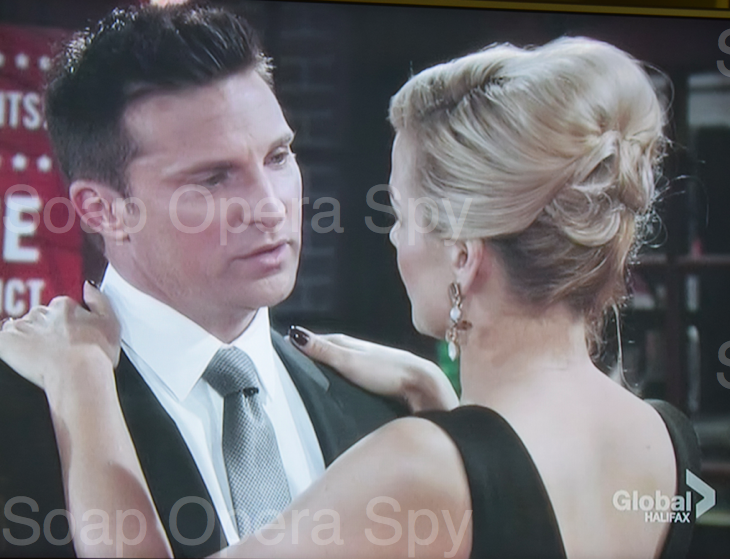 Meanwhile Avery comes into Crimson Lights and she is remembering her time with Dylan [Steve Burton] there and remembering him proposing to her. Dylan walks in. 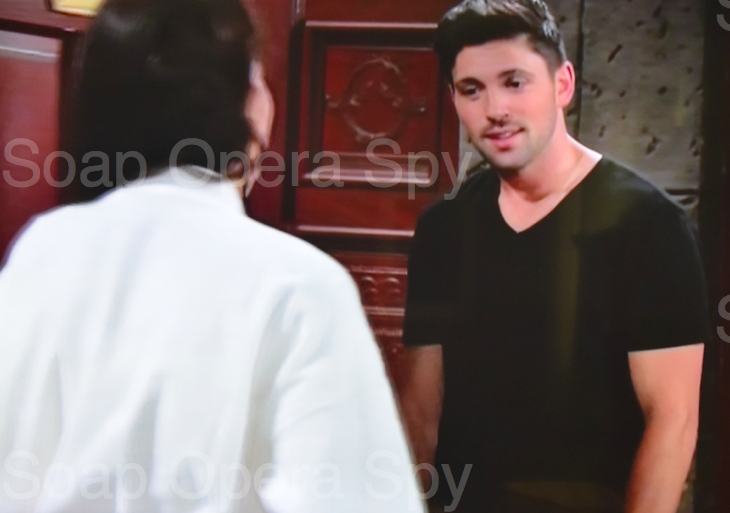 Noah [Robert Adamson] shows up to see Marisa [Sophia Pernas] he brought her something because she was not feeling good. Marisa is impressed he bought her chicken soup, she tells Noah he is sweet but she is not the women he thinks she is.

Avery tells Dylan she thought he was gone for the night but she is glad he is here she wants to talk to him. Avery tells Dylan the charges are dropped against her and she is concentrating on getting better she does not care about her career anymore. Avery says, “Sometimes you have to say goodbye to what you love the most.”

Related: ‘The Young and the Restless’ News: Jack is Back – 10 Fun Facts You Want To Know About Peter Bergman!

Nick tells Sage that Avery did him a favor leaving him. Sage agrees but says it is sad how Avery lost Dylan.

Victor throws the contract at Adam and tells him to read the contract. The contract clearly states he is, “the interim CEO!” Victor says, “and the interim has come to an end and it is time for you to vacate the premises.” Adam tells him to go read the fine, fine print because it says he will have the position as long as Jack is in a coma. Victor says, “You know who I see when I look at you? I see my son Adam!”

Noah agrees he does not know much about Marisa. Marisa tells Noah people don’t do things for her and she has no family she takes care of herself. Noah feeds Marisa the chicken soup and tells her she has to let people take care of her now and then. He goes to lean over to kiss her and says, “I am so sorry I cannot do this.”

Billy is ripping into Abby telling her she should never have taken Gabriel’s job offer. Stitch and Ashley walk in and tell him to lay off and Stitch threatens to throw Billy out. Billy apologizes and leaves.

Chelsea wants to know why Victor says he sees Adam in Gabriel. Victor says, “Once upon a time Adam sat behind that desk because he wrestled it from me. Interesting thing about Adam though he did not sit there long. I found out he was making deals behind my back so I kicked his ass out of here. I just wanted you to know anyone who crosses Victor Newman in business does not survive very long, because I destroy them, even my own son!”

Related: ‘The Young and the Restless’ Trivia: How Well Do You Know YR’s Ashley Abbott?

Billy walks in and congratulates Gabriel for putting Abby in charge and she screwed up he sees Victor and says, “Shouldn’t you be somewhere making license plates?” Victor tells Billy that he is out on bail because they found evidence that the shooting was in self-defense. Billy leaves and Chelsea goes after him and tells him she believes Gabriel was setup. She goes on and says, “Like it or not there is going to be a power struggle between Victor and Gabriel and you are going to have to choose sides.” Billy laughs.

Ashley comes in to see Jack. Phyllis [Gina Tognoni] tells her there is no change.

Dylan is feeling a bit bored at the coffee shop and says he needs a change. Avery tell him her too she is leaving Genoa City to get the help she needs and she doubts she is coming back. 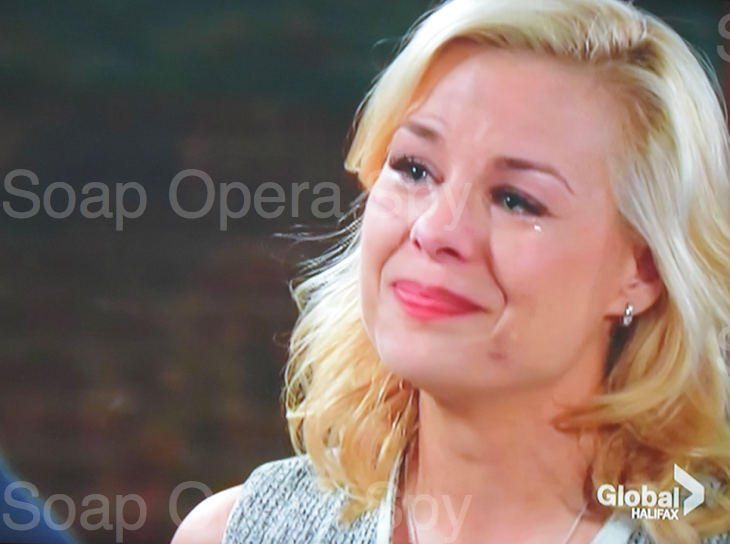 Avery reminisces about her time with Dylan and tells him she has lost her way and needs to find it again she hopes Dylan will remember their good time together. 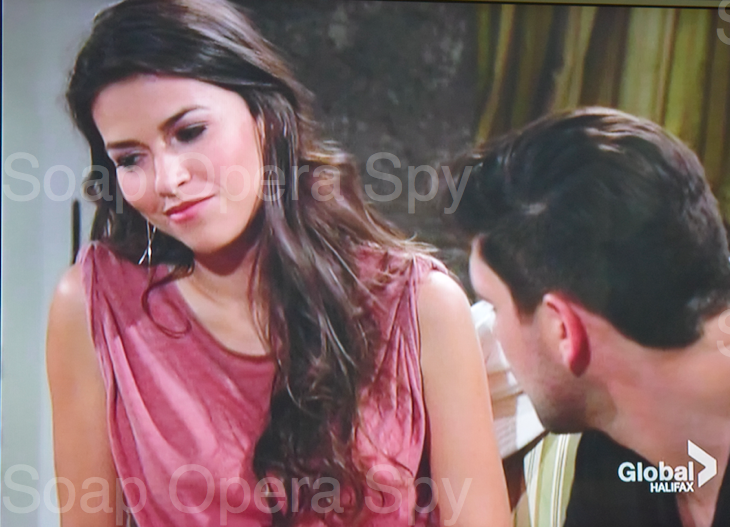 Noah apologies and tells Marisa she is beautiful and he likes spending time with her and talking to her. Marisa thanks him.

Adam accuses Victor of having someone sneak into Jack’s hospital room and putting Jack’s hands on the gun they found. Victor gets a call and leaves and gives Adam a parting shot, “Don’t get too comfortable in that chair, okay?”

Chelsea comes in and asks Adam what happened and Adam tells her Victor lied like crazy. Chelsea reminds him Victor will fight like crazy for his place back and Billy walks in and says he wants to get a few things straight he is choosing the only side he can, “the Abbots and not an Abbot come lately.” 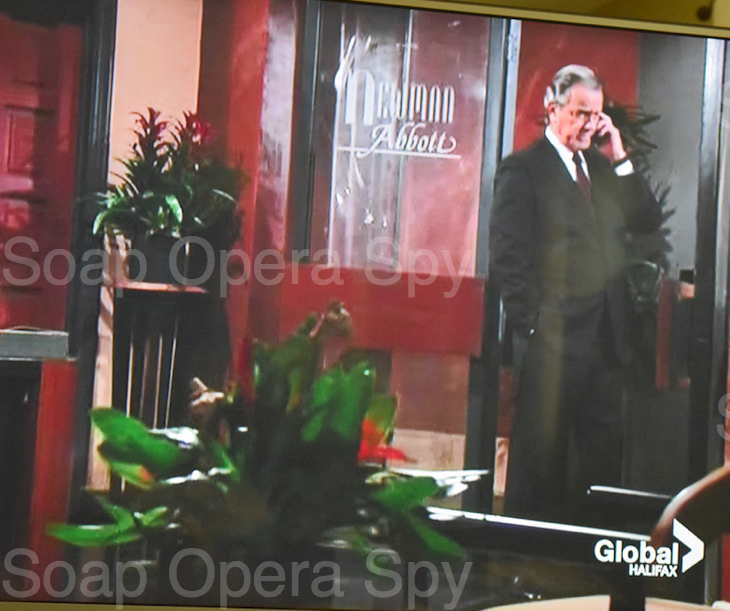 Victor is on the phone and he says, “Did you find out where she is? Hmm Good work!”

Nick tells Sage he feels like she was upset about the things he said about Gabriel. Sage says she will have to deal with it. Nick tells Sage if she asks him to he could quit Newman Abbott. Sage is flattered but tells him no. Nick says, “What I love about you and this relationship is that it is honest and open and not lies.” 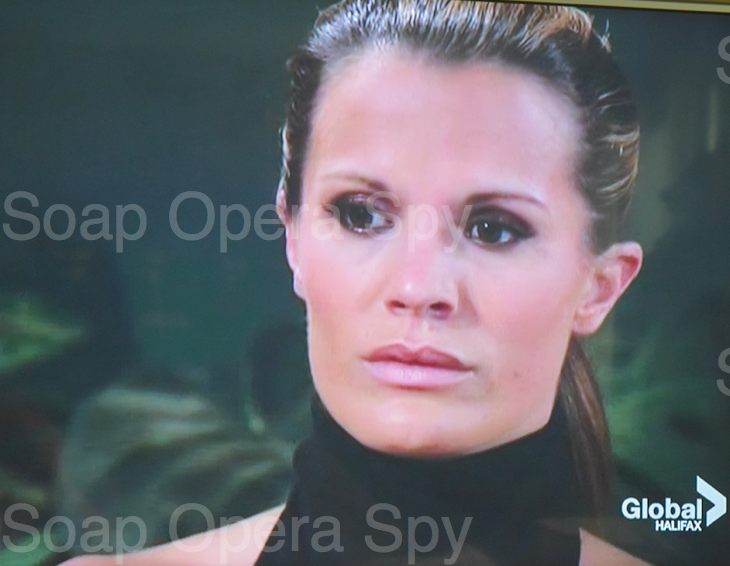 Chelsea tells Adam she is not sure how much more she can take. She afraid the more time he stays with Victor the more risk he puts himself at. Chelsea wants Adam to step aside and give Victor the company back but Adam tells her he won’t do that to Jack. Chelsea does not buy it is about Jack. Chelsea tells Adam, “You are never going to be able to get what you want from Victor, you never have and never will.” 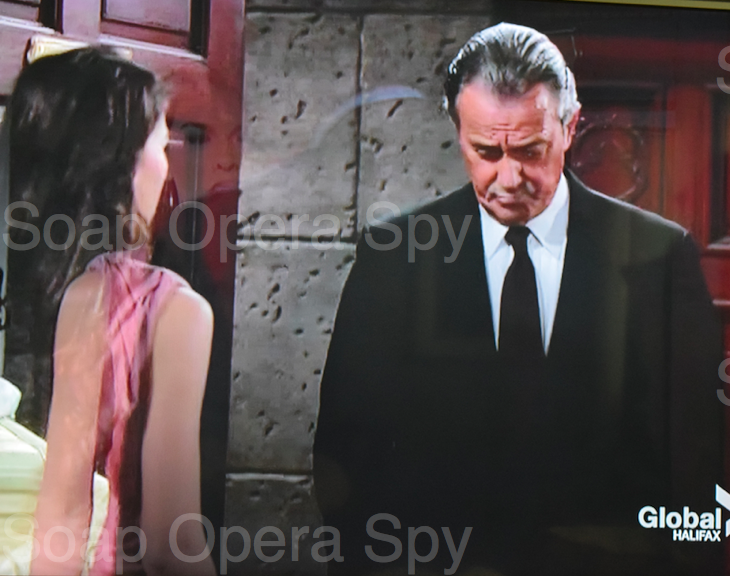 Marisa thanks Noah for all he has done for her and has been a good friend. She steps up and hugs him. Noah leaves. Someone knocks on the door, Marisa opens it and it is Victor she says, “How did you find me?” Victor says, “It is not important, what is important is last time we spoke you threatened me. It is not a good idea to ever threaten me.”

Billy comes to see Phyllis and he is upset Victor is out on bail. He sits at Jack’s bedside and tells him the snakes are trying to divide them. Billy talks about Jack’s son Gabriel and Jack starts squeezing his hand. Billy is confused and finally Phyllis says, “Ask him if Gabriel is his son?”  Billy does and Jack says NO! 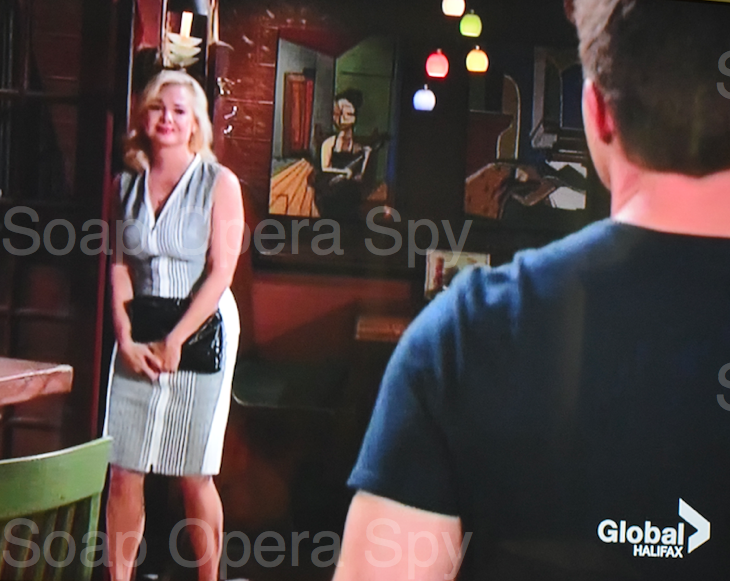 Dylan asks Avery if she is going to tell him where she is going. She says it does not matter but this maybe the last time she sees him. They are both very emotional. Dylan tells her to take care of herself. They hug. They are both crying. Avery kisses him goodbye and leaves. 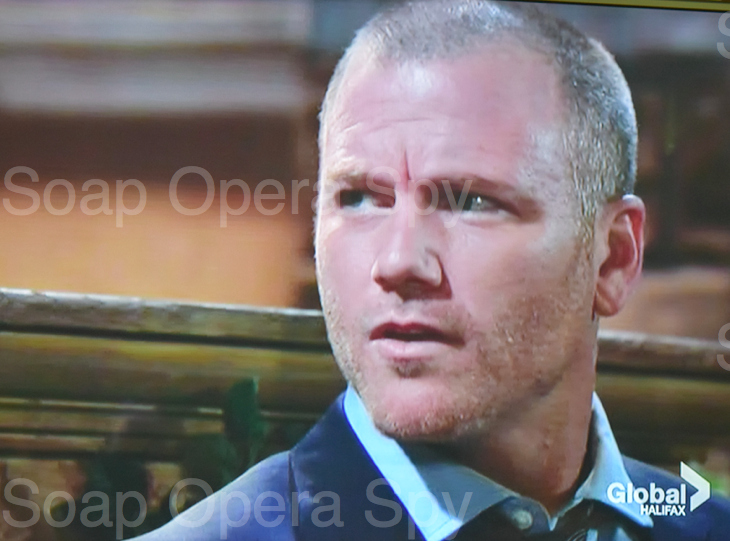 Stitch sees Ashley in the park she says she needs a break. Ashley tells Stitch that Abby needs him. Stitch agrees they need to forget about what he said it is better for everyone.

Noah comes into The Underground Nick is surprised to see him and Noah says he has been feeling restless he feels he is starting to forget Courtney[Kelly Gross]. Nick tries to console him. Noah says he really did love Courtney and thought he would never feel that way about another women again. Nick asks, “DO you?” and Noah nods Yes. Noah asks Nick how he [Noah] could be so disloyal to Courtney. Nick tells him he is just being human.

Sage gets a call. It is the doctor, the results of the paternity test are in.

Adam tells Chelsea he is long past trying to get something from Victor he has learned his lesson. Chelsea thinks he is trying to get his father’s approval and it cost them a lot last time. Chelsea tells him he has to step away from the job because it is going to consume him again and she refuses to stay around and watch.

Billy is freaking he tells Jack Gabriel has to be his son the DNA test proved it. Jack indicates it is not true by squeezing his hand. Phyllis wants to go and tell Gabriel what they know. Jack squeezes NO. Billy agrees they have to keep the info between themselves and we hear Jack thinking, “Finally little brother, you got it!” 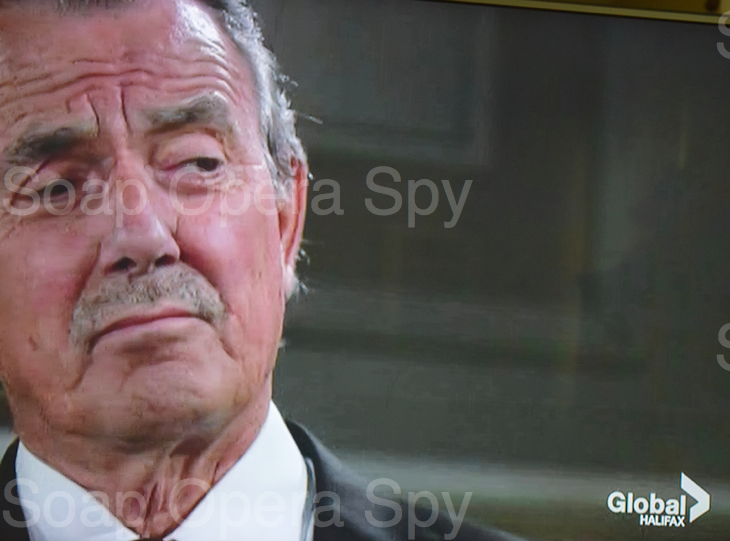 That is it “The Young and the Restless” fans!  What do you think Phyllis and Billy are going to do now that they know Jack is not Gabriel (Adam)’s father?  Who do you think is the father of Sage’s baby?  How long is it going to take Victor to figure out Gabriel is his son Adam?