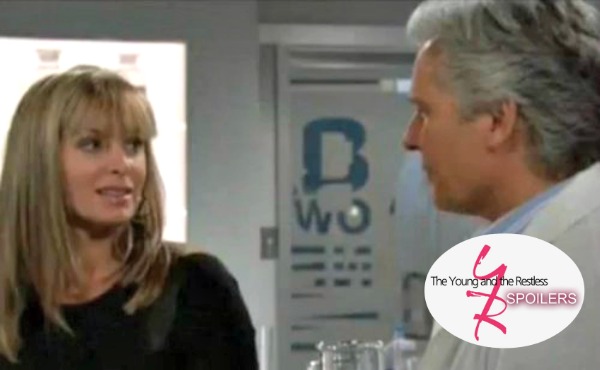 ‘The Young and The Restless’ (Y&R) spoilers reveal that Ashley Abbott [Eileen Davidson] will make a New Year’s confession about her health crisis to a surprising person. At the wedding of Abby Newman [Melissa Ordway] and Ben “Stitch” Rayburn [Sean Carrigan], Ashley is clearly struggling.

But their New Year’s nuptials seem like the wrong place and time for Ashley to bring up her medical crisis – so she won’t – at least not before her daughter, the bride, makes it down the aisle. But once she gets Abby safely wed, it’s time for Ashley to focus on her health crisis.

Even though her brother Jack Abbot [Peter Bergman] is at the event and her sister Traci Abbott [Beth Maitland], Ashley will continue to fib to her family about why she left Jabot and launched the new research endeavor with Dr Simon Neville [Michel E Knight].

And, ultimately, it will be to Dr Neville that Ashley reveals her impending doom. Early in 2015, Ashley was diagnosed with a congenital brain aneurysm that required surgery. That seemed to have healed up well, but now Ashley is suffering pain, dizzy spells, and bouts of passing out.

This looks much more like a brain tumor. In fact, a brain tumor could have caused the aneurysm but wasn’t itself diagnosed at the time. Whatever is going on in Ashley’s brain is likely both serious and fatal, otherwise she never would have signed up to work with Neville.

Ashley has been asking Neville a lot of questions about human trials and the case of Hilary Curtis [Mishael Morgan] and he thinks it’s just the professional curiosity of a colleague. But he won’t be laboring under that misapprehension for long.

It’s to Dr Neville that Ashley will confide her medical troubles but will likely first elicit a promise to keep the matter confidential. Neville won’t have a problem doing that and the bonus of telling the wacky doctor is that now he can focus his research on Ashley’s specific disorder.

Will Dr Neville’s eccentric practices be able to cure Ashley of her malady? And how long can she keep hiding what’s going on in her noggin since she’s having blinding pain and popping pain pills like they’re Tic Tacs?

Is Ashley’s condition curable at all? If it is a brain tumor, obviously it’s inoperable or she would have already had it cut out. Perhaps it’s at a delicate spot in her brain that’s too risky for surgery. Whatever the issue, Ashley will share her secret in with the doc.

Then we can expect to see Ashley and Neville grow closer as they collaborate on research to save her life. Will Neil Winters [Kristoff St John] or Gwen Randall [Nadine Nicole] notice what’s going on or will Ashley be able to keep her secret until she and Neville find a treatment for her condition?

You May Also Like –> Adam Holds Sully, Gets Suspicious – Chelsea Wants Another Baby with Adam – Traci Returns for Christmas

And will these unlicensed human trials lead to Neville being barred from medical practice for good? At least Ashley is putting her scientific skills to use for more than developing wrinkle cream – this is life-saving stuff – but will it be completed in time to save her own life?

Stay tuned to Soap Opera Spy for this and other developments in Genoa City in our daily “The Young and The Restless” spoilers plus news and special features.

‘B&B’ News: Heather Tom Shares She And Her Hubby Hiked 40 Miles With Son On Their Back