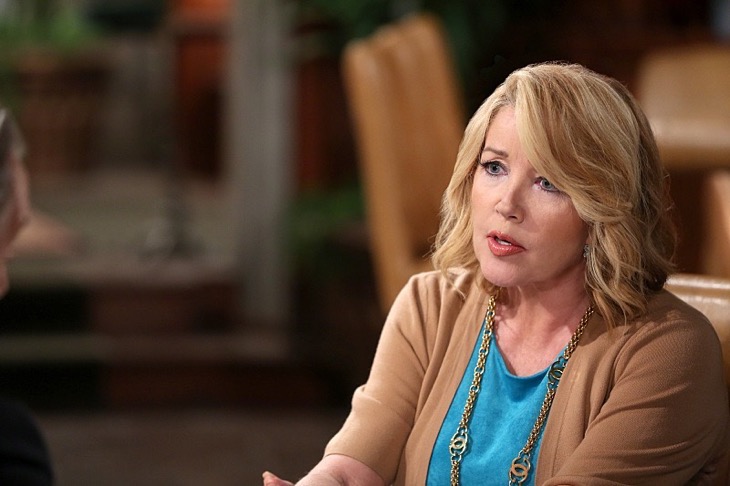 “The Young and the Restless” Y&R” rumor mill teases that Melody Thomas Scott (Nikki Newman) is retiring! Melody took to Twitter to dispel this ridiculous rumor! This comes just a few days after Melody set the record straight – also on Twitter – telling fans that co-star Eric Braeden (Victor Newman) is not retiring, has not quit the show and is not leaving the show.

An innocent question and answer session on Melody’s Twitter account is what put the actress – rightfully so – into defense mode. A follower asked “@MelodyThomasSco Melody are you retiring?” The reply? “This is a new rumor that seems 2 B picking up steam. NO, I AM NOT RETIRING!!! Where do people get such things?” 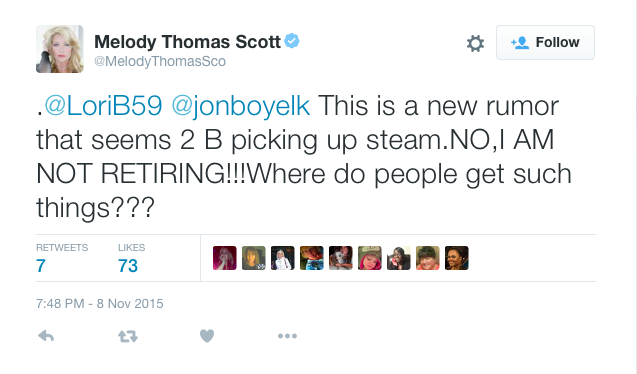 This is indeed a new rumor and why it’s out there no one seems to know. And fans were quick to help Melody squash the rumor – and also to express their relief that she is not going anywhere! One Twitter fan advised the actress to just ignore the stupid rumors. “Those of us who KNOW you a7 Eric, know how contracts work! Smiles!”

Unfortunately when these rumors start the stars of “Y&R” are forced to address them as they pick up speed. If the actor or actress, in this case both Melody Thomas Scott and Eric Braden, try to ignore them then many assume their silence means the untruths are in fact true.

Just in case you did not get it the first time – Melody Thomas Scott is NOT retiring from “The Young and the Restless.” That rumor is 100% FALSE! As far as the rumors about Eric Braeden retiring or quitting “Y&R”? Those rumors are 100% FALSE! Braeden just signed a contract that keeps Victor Newman in Genoa City through 2017. Much like Jeanne Cooper (Katherine Chancellor) Eric Braeden plans to work right up until the day he dies.

Nikki Newman and Victor Newman go together – they’re a package deal, a super couple that has withstood the test of time. If Eric isn’t going anywhere then logically neither is Melody.

‘Days Of Our Lives’ POLL: Will Hope Forgive Bo And Reunite With Him After Aiden Nearly Killed Her? VOTE!