‘The Young and the Restless’ Interview: Tracey Bregman Talks Her Marriage To Michael, Her Relationship With Cane and the Kiss 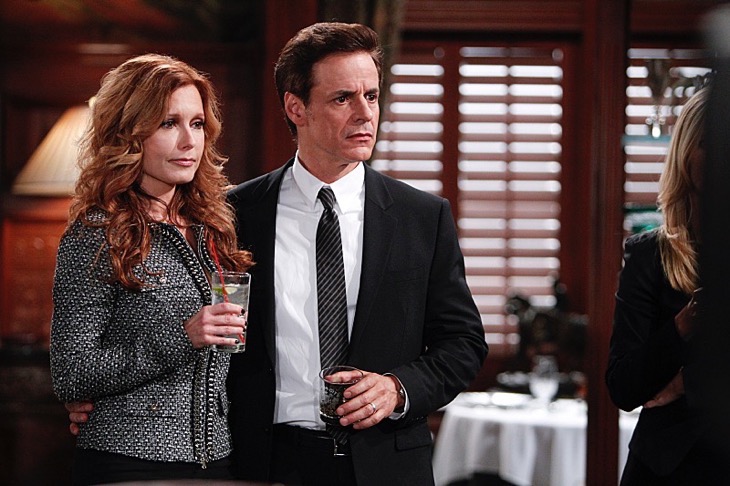 Tracey Bregman, who plays Lauren on “The Young and the Restless”, recently opened up to Soap Central about the possibility of Lauren and Michael’s marriage coming to end, and her shocking kiss with Cane. Bregman discussed everything in regards to Lauren’s marriage to Michael, whether or not she thinks the marriage will end, and if she believes that Lauren and Cane will eventually turn into something more than a secret affair.

When Tracey Bregman was asked about how she felt about the story taking a turn and Michael pushing Lauren away because of his cancer she admitted that it has been a difficult story due to the the invested emotions, and the fact that the storyline is heartbreaking to fans. She goes onto say that despite how challenging it has been, that she and Christian just want to do their best to portray the events in a believable manner. She says, “I know it hasn’t been a fan favorite story. It’s so hard for our fans to think that anything could come between us but as actors, we sort of look forward to something thats interesting and different to do…We are very protective of our characters and we want the story to have a good outcome.”

Related: ‘The Young and the Restless’ Spoilers June 15: Phyllis Spies On Flack-Tells Him Marisa Is Dead, Kyle Reveals Too Much, Ashley Fears Jail For Setting Victor Up

So where does that leave Michael and Lauren? Trace Bregman did not say much about the outcome of their relationship, but when she was asked whether or not she believed Lauren would continue to stand by Michael she simply said, “She’s almost at the end of the rope, but that’s all I can say.” Really!? We want to know more!

What about Lauren and Cane? Tracey Bregman also opened up about her thoughts on Cane and Lauren’s attraction, and whether or not she believes it is a real attraction, or if Lauren is just using Cane to cope with everything that is going on in her life.

Tracey says, “Well, you have to remember that they have the commonality of pain, they both have shared the fact that they’ve both had a spouse with cancer, and I think she looks to him as her lifeline because he’s the only who’s said, ‘Hold strong, hold strong, it’s going to be okay. He’s going to come back around. Lily did this, Lily did that, and it turned out okay.”

Tracey goes onto say that she does not really know whether or not Cane and Lauren could become an official couple. She reveals that it really depends on how much more Michael pushes Lauren, but as of now, she believes that Cane and Lauren are just really good friends.

Well, there you have it. Despite Tracey Bregman revealing some minor details about Lauren and Michael’s relationship on The Young and the Restless, it looks like we will have to just keep watching to see what happens with the couple, as well as where Cane and Lauren end up.

‘The Young and the Restless’ Spoilers June 15: Phyllis Spies On Flack-Tells Him Marisa Is Dead, Kyle Reveals Too Much, Ashley Fears Jail For Setting Victor Up

‘Days of Our Lives’ Spoilers: Serena Tries to Run – Daniel Stops Her, Will Xander Be Killed by Serena or Victor’s Minions?