‘The Young and the Restless’ Spoilers June 15: Phyllis Spies On Flack-Tells Him Marisa Is Dead, Kyle Reveals Too Much, Ashley Fears Jail For Setting Victor Up 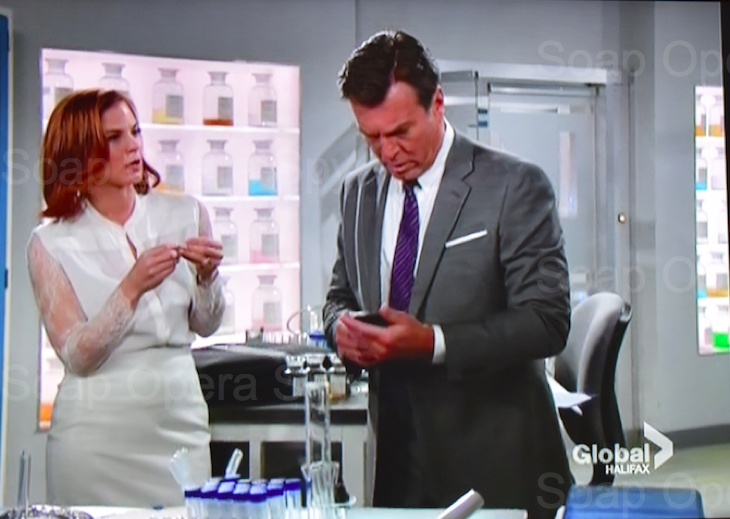 “The Young and the Restless” spoilers for June 15, 2015 reveals that although Flack has been able to convince the rest of the Abbotts to frame Victor, Ashley is not on-board.  Ashley feels Flack is taking none of the risk and the rest of the Abbott Family could go to jail.  Summer pressures Kyle to tell her what is going to with the Abbott Family.  Nick and Sage tells Dylan and Sharon they plan on moving in together. 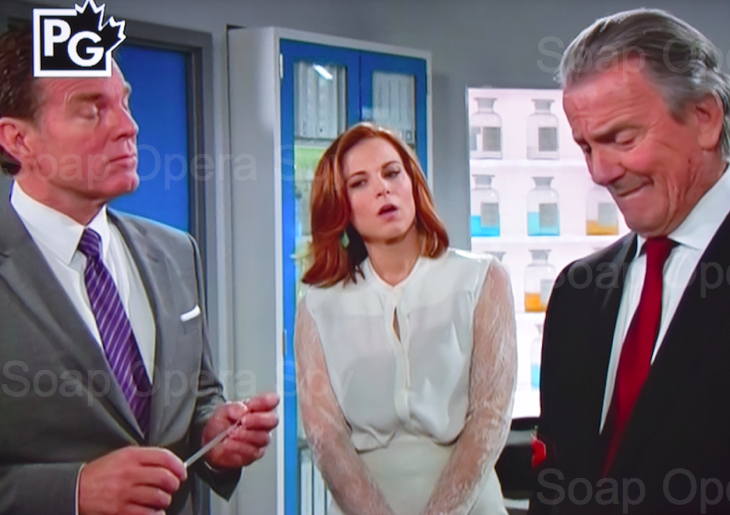 Monday’s episode of Y&R opens with Phyllis [Gina Tognoni] walking in on Flack [Peter Bergman] and Victor’s [Eric Braeden] tense conversation wanting to know what is going on. They make a mistake that Victor is worried about Ashley [ Eileen Davidson] . 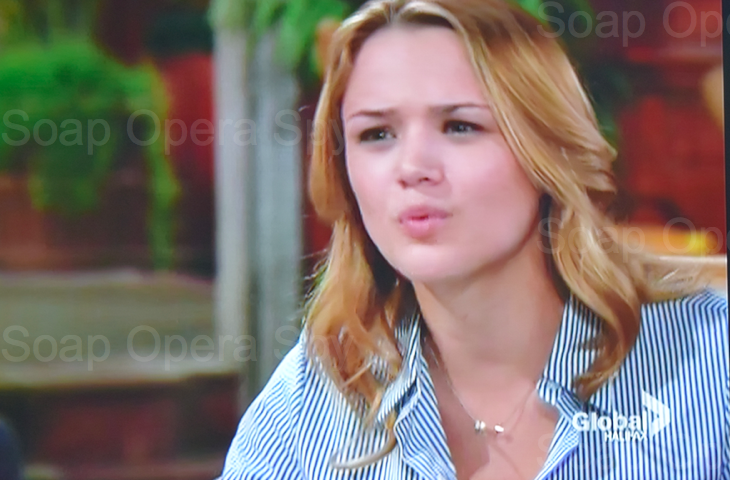 Summer [Hunter King] is whining about secrets to Kyle [ Lachlan Buchanan] and Ashley walks in they are surprised to see her out of the hospital already. Ashley wants to know what is going on and Kyle tells her to see Flack he will fill her in. Summer is upset she feels Kyle is leaving her out of the loop.

Billy [ Burgess Jenkins] and Victoria [ Amelia Heinle] are at the Underground still flirting with each other.

Sage [ Kelly Sullivan] is at Crimson Lights and Nick [Joshua Morrow]is fussing over her. She is in shock because Nick invited her to move in with him. He says it makes a lot of sense. Sage is concerned about Faith, Nick says she is warming towards Sage. Sage is not buying it. Nick says the baby makes them a family. Sage agrees to move in.

Ashley leaves and Kyle asks her why she was saying things to Ashley. Summer says she knows what she saw they were plotting she wants to know what was going on. She has not been believing what Kyle is saying. 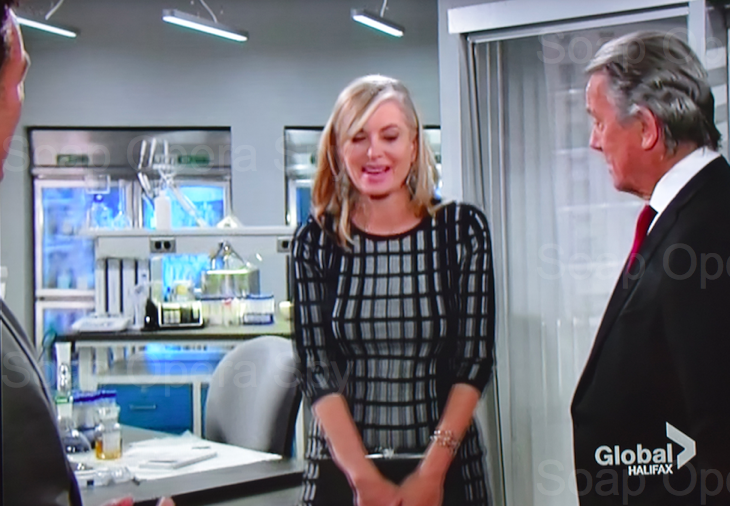 Ashley comes into Newman/Abbott and Victor and Flack are worried she is back so soon. She promises not to work too hard she asks to speak to Flack in private.

Phyllis tells Victor she does not believe one word of his excuse about them talking about Ashley. 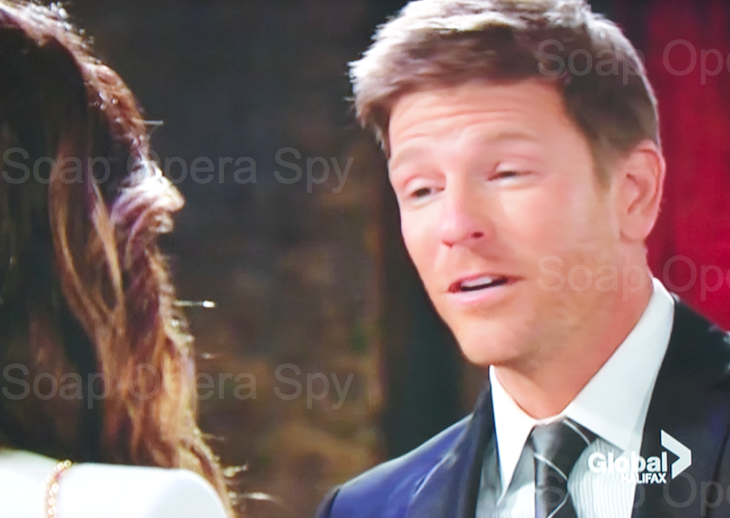 Victoria is glad they are getting along now she is glad she can count on Billy. Victoria tells Billy she wants him to trust him and she wants to ask him a question. 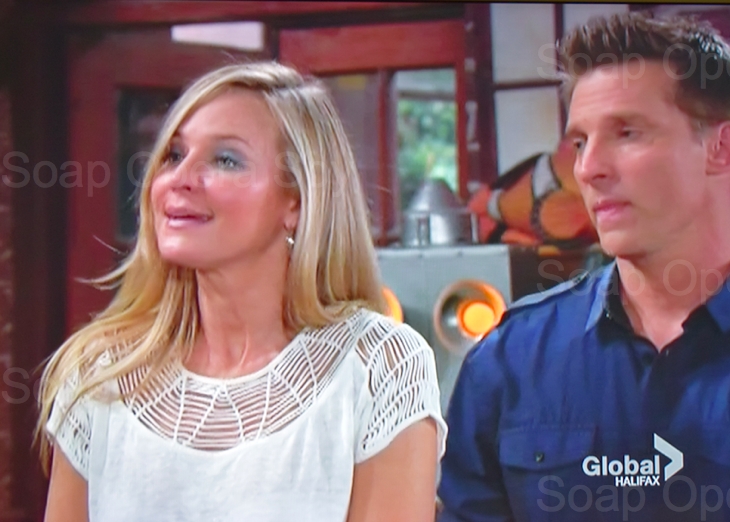 Sharon [Sharon Case] and Dylan [Steve Burton] come over to see Nick and Sage. Nick tells Sharon he owes her an apology. Sharon tells him she appreciates his apology. Nick says he heard Joe [ Scott Elrod] was walking and Dylan says ya but he did not tell Avery [Jessica Collins] . Nick calls him a dirt bag and Sharon tells them Avery got a restraining order. Nick tells Dylan to watch his back he does not want trouble from Joe. Nick tells Sharon and Dylan he has news he and Sharon are moving in together.

Sharon congratulates Nick and Sage and tells Sage she will be in good hands with Nick. Sharon offers to talk to Faith.
Summer is still whining and Kyle tells her it is business and he cannot discuss it. She gets up and says if he wont tell her she is leaving. Kyle agrees to tell her a secret he says, “I love you Summer Newman and I think you are in love with me too!” She tells him he has to be honest with her and he finally agrees.

Victor asks Phyllis if she thinks he does not care about Ashley and Phyllis says she did not say that but she knows Flack and him were not talking about Ashley, Phyllis does not accept that Victor and Flack were having a heart-to-heart. Phyllis apologizes for over reacting, Victor leaves and Phyllis is still not convinced. 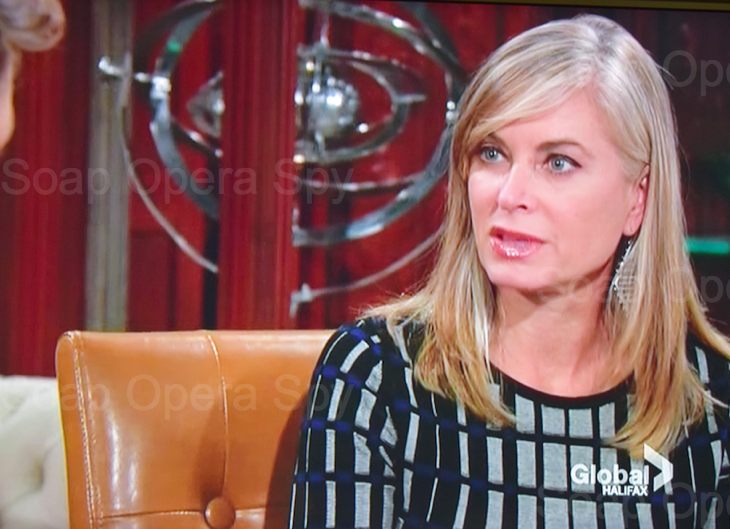 Flack tells Ashley that they are planning to frame Victor. Flack wants to know if he can count on Ashley. Ashley refuses to go along with the plan after all it is illegal. Flack says his plan was to merge with Victor, set Victor up and take both companies.

Victoria tells Billy that she still has doubts about Victor and Flack she is sure Flack is going to make the first move to screw Victor over. 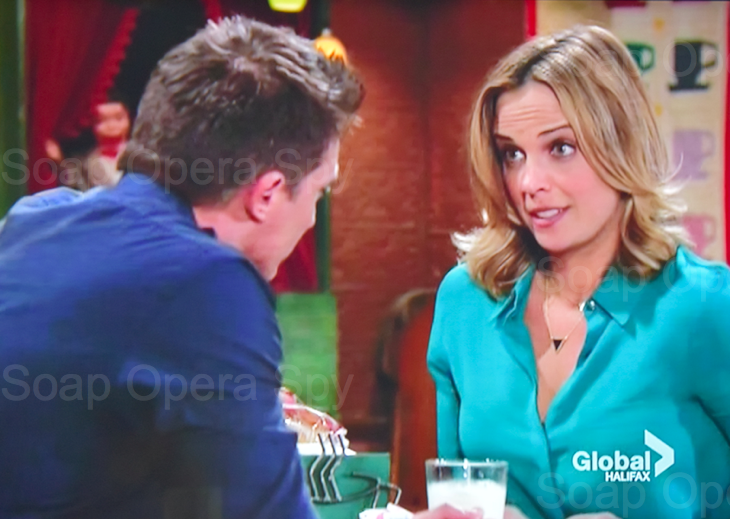 Dylan tells Sage that he intends to be with Sharon for a while. Meanwhile, Nick thanks Sharon for being so great about his and Sage’s news. He tells Sharon he is proud of her and thinks Dylan is good for her.
Billy and Victoria continue to flirt and they both agree that Victoria would keep and eye on Victor and Billy would keep an eye on Flack 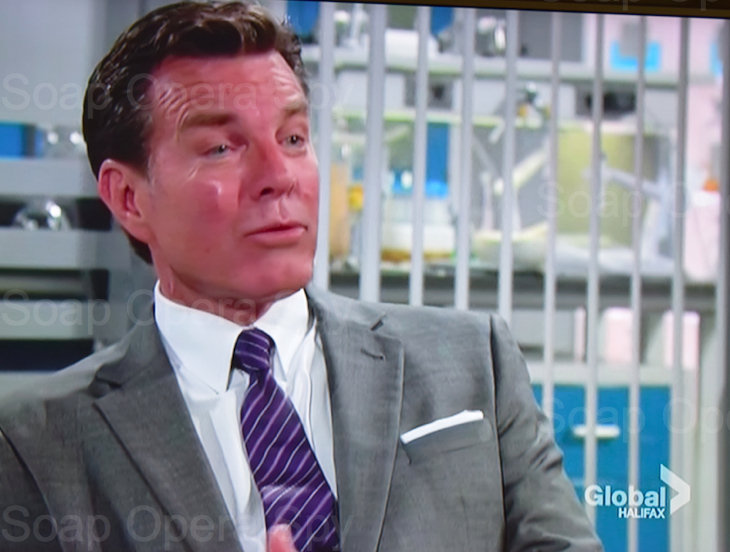 Ashley is still complaining to Flack about how he convinced her to agree to the merger. Ashley thinks Flack lied and Flack agrees he wanted Victor to drop his guard. Ashley is not pleased she thinks that Flack is making them all due the dirty work and his hands are clean. Flack says he has to stay a step removed. Ashley thinks it is just wrong. Flack tells her to stay out of his way while he and the rest of the Abbotts do what has to be done.

Dylan tells Sharon she put on a good face but he could tell she was a bit upset when she heard Sage was moving in . Sharon says she knows Dylan is not ready to take the next step. Dylan says he has been thinking about things and feels Sharon is incredible and coming home to her just feels right. Dylan says, “Sharon I would like to move in with you today if you would have me.”

Victor is at the Athletic Club and Sage and Nick come in they go see him. Nick tells Victor there has been a change of plans Sage is moving in with him. Victor is surprised but says, “The baby must be given first consideration!” 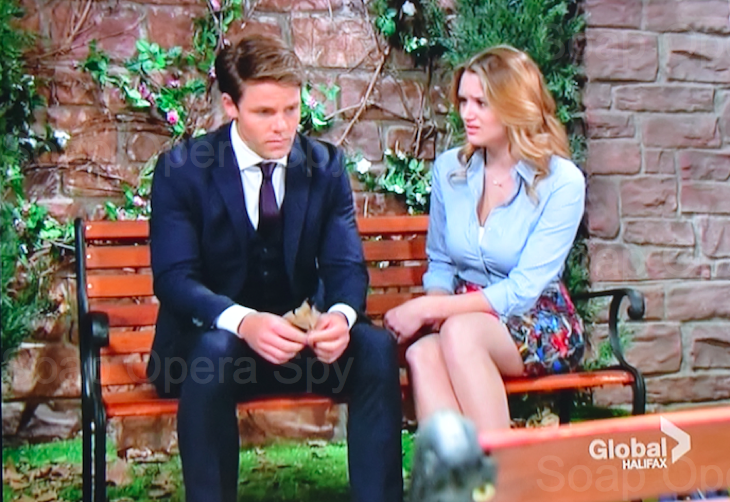 Kyle tells Summer things with the merger are not what they appear to be. 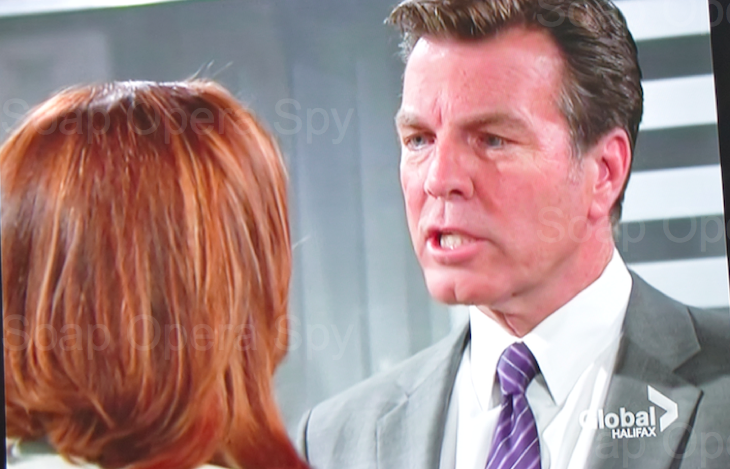 Ashley leaves Flack’s office and tells Phyllis coming back to work was a mistake. Ashley leaves. Phyllis tells Flack she does not buy the bogus explanation him and Victor gave her. She tells him not to lie because she questioned Victor. Flack gets angry and Phyllis says she wants to know what is going on. 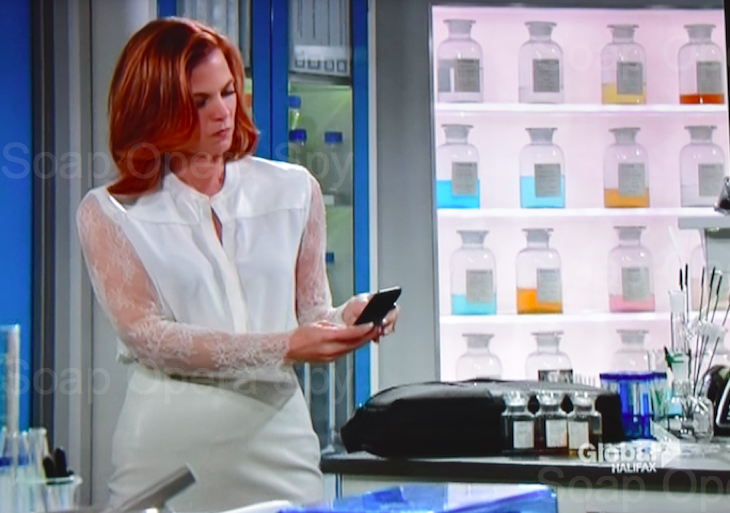 Flack tells Phyllis of course he is anger he questions she wants the merger to work. Phyllis tells him she needs the truth. He tells her Ashley and him had a misunderstanding about her coming back to work too soon. He apologizes and leaves. His phone gets a text message and Phyllis picks it up and looks at it. 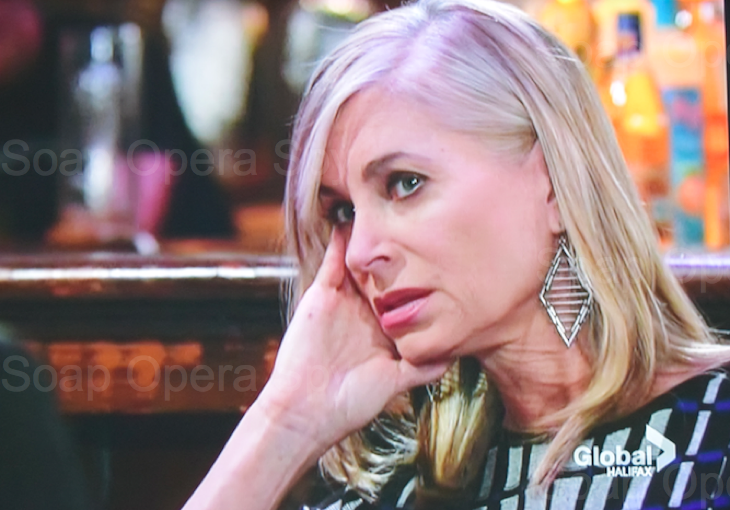 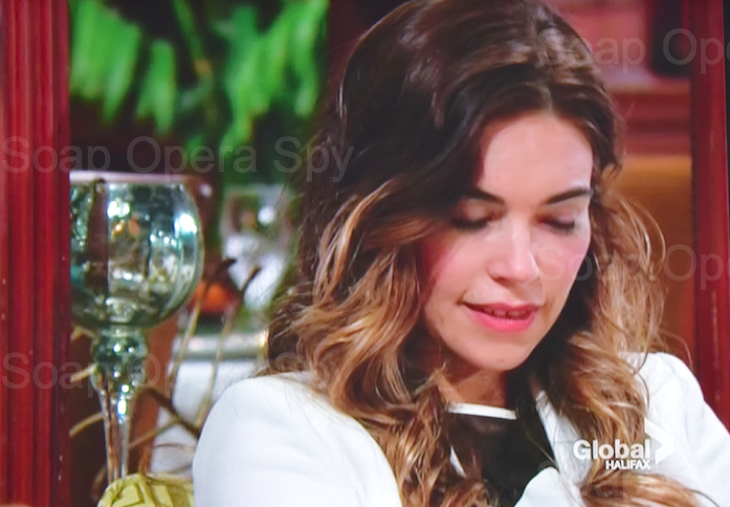 Summer is whining now that she knows something is going on. She knew it was too good to be true. Summer wants to know the details. Kyle tells her Flack feels like he has to protect Jabot’s interests. Summer says that is not news. Kyle says, “Sorry your disappointed.” Summer says you are not telling me everything – Flack is planning something isn’t he? Kyle tells Summer it would be better for both of them if she dropped it. 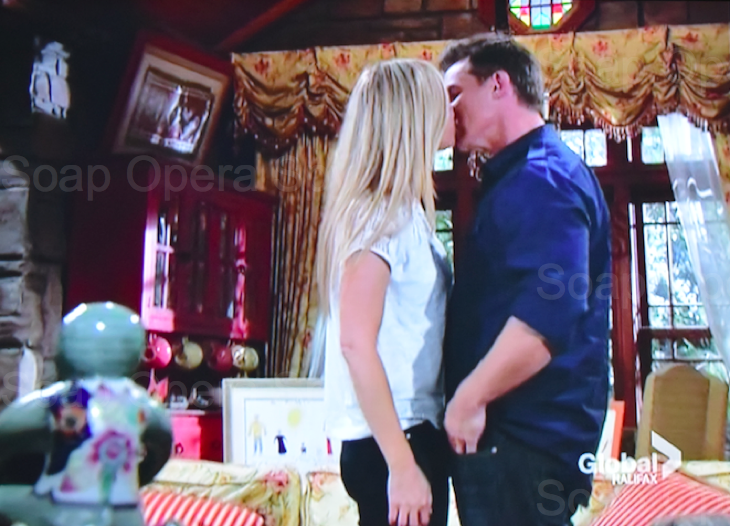 Nick & Sage are moving her things from her room at the club. Sage is very excited. Meanwhile, Dylan shows up at Sharon’s house with his things.

Ashley tells Billy their father would never approve of Flack’s plan. Billy agrees but says their dad would not have liked Victor taking over his legacy. Billy tells her if it is to succeed they all need to be on-board. Ashley says, “Okay I am in.” 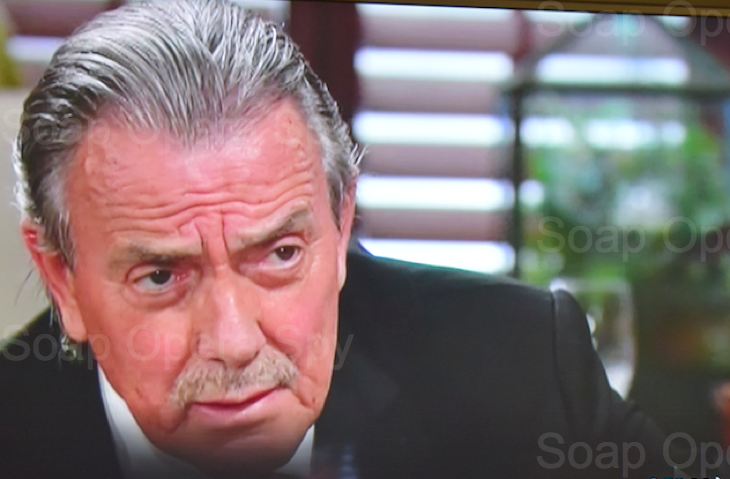 Victoria tells Victor she does not like to mislead Billy but she will do what it takes to protect the company. Summer runs in and says, “Grandpa there is something you need to know!” 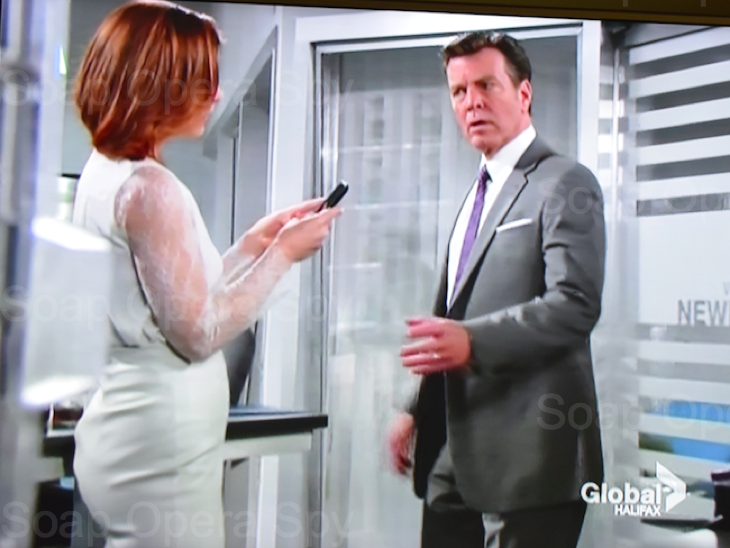 Flack comes in and sees Phyllis with his phone. She tells Flack he got a text message, “Confirmation M was there and they are both dead.”

Flack grabs his phone and Phyllis says, “You got a phone call earlier and it looked like you lost your best friend. Why don’t you tell me the truth Jack? Who is M?”

That is it “The Young and the Restless” fans! It seems the only member of the Abbott Family who has a brain is Ashley.  She knows what Flack plans to do to Victor is illegal.  Is she right and is Flack setting the Abbott Clan to go down?  What does Summer reveal to Victor.  Does Summer know all Flack is planning?

‘The Young and the Restless’ Interview: Tracey Bregman Talks Her Marriage To Michael, Her Relationship With Cane and the Kiss