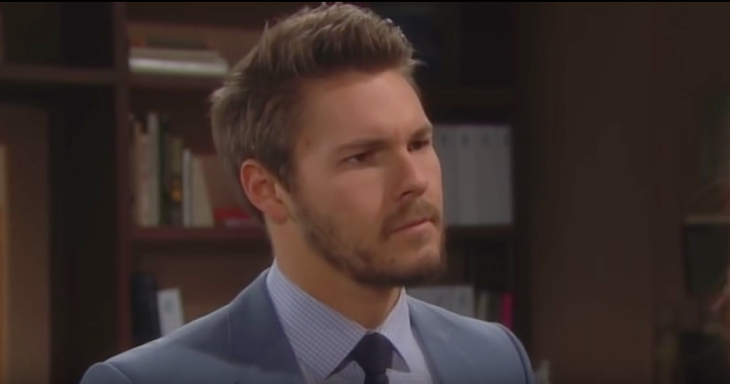 “The Bold and the Beautiful” spoilers reveal that the drama is about to heat up between several key characters. Just a few short weeks ago, Liam (Scott Clifton) was trying to decide between Steffy (Jacqueline MacInnes Wood) and Ivy (Ashleigh Brewer) while Wyatt (Darin Brooks) scrounged around for the leftovers. However, what was once a love quadrangle has turned into an all-out war. Alliances are being made. Plans are being formed. It’s clear that everyone involved has something to lose and they’re not about to give it up without a fight.

B&B spoilers say Liam will try to convince his ex to give all of this a rest, but that’s the last thing “Poison Ivy” intends on doing. Ivy will let Liam know that she won’t be intimidated. Right now, Liam and Steffy don’t have much to back up their threats. A simple “do it or else” isn’t going to cut it. Ivy knows that as long as she has the incriminating video of Steffy, she can do almost anything she pleases. With that in mind, Steffy will once again resume her mission of deleting the footage.

Related: ‘The Bold and the Beautiful’ Spoilers: Watch The B&B Video Preview For Wednesday August 26 – SEE IT HERE!

“The Bold and the Beautiful” spoilers tease that Steffy will beg Wyatt to reconsider his decision of helping Ivy with her blackmail scheme. Steffy will plead with Wyatt to get rid of the video once and for all. Of course, it’s doubtful that Wyatt will agree to it this time. Wyatt might’ve thought about it before, but now Ivy has him wrapped around her little finger. Besides, Wyatt is starting to see the light when it comes to profiting from Ivy’s plot. It seems there’s just no other way for Wyatt and Ivy to get ahead.

Wyatt and Ivy aren’t exactly taking the moral high road, but they’re doing what they have to do to make it at Forrester Creations. The rumors hint that this plan will blow up in their faces eventually, but they’ll enjoy it while it lasts. Whatever happens, Liam will pull out all the stops to make sure Steffy holds onto her freedom. Can Liam keep Steffy out of jail and help her reclaim control of her life? Stay tuned to “The Bold and the Beautiful” for updates on Liam’s efforts to protect Steffy.

So B&B fans, what do you think about the news that these teams are about to really kick their schemes in gear? Are you rooting for Liam and Steffy or Ivy and Wyatt? Will Ivy look just as bad as Steffy if the video is leaked and the blackmail plot is exposed? Let us know what you think in the comments below and don’t forget to check Soap Opera Spy often for the latest “Bold and the Beautiful” spoilers, rumors, updates and news.