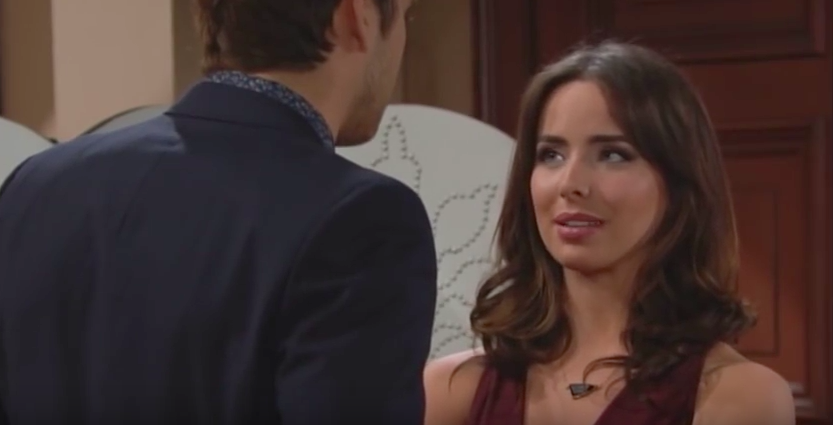 “The Bold and the Beautiful” spoilers reveal that Thomas (Pierson Fode) will try to make Ivy (Ashleigh Brewer) doubt her relationship. Ivy should be feeling guilty about the recent kiss she shared with Thomas. Ivy managed to resist Thomas at first, but it wasn’t long until her emotions got the best of her. However, Wyatt (Darin Brooks) means a lot to Ivy and she’ll insist that she can’t do this to him.

Thomas will suggest that Ivy needs to rethink her ideas of romance. It seems Thomas thinks he’d do a much better job of being the man in Ivy’s life. “The Bold and the Beautiful” spoilers say Ivy will declare that Wyatt loves her, but Thomas won’t be so sure. Thomas will hint that maybe Ivy is just convenient. Ivy cares about Wyatt, but she could continue to give into temptation if Thomas says all the right things. Nothing would make Thomas happier than to steal Ivy away from her current beau.

Of course, Wyatt has made it perfectly clear that he doesn’t appreciate how Thomas acts around his girl. If Thomas wants to win Ivy over, he’s going to need more time alone with her. Perhaps then Thomas can really work his magic. Fortunately, Thomas will get his wish when Wyatt goes out of town. Wyatt’s business trip is coming at the worst possible moment. Ivy could be teetering on the brink of a full-fledged affair. B&B viewers know how Thomas operates. There’s a good chance Thomas won’t settle for a simple kiss.

In the end, Thomas will either take Ivy to bed or she’ll come to her senses. Whatever happens, Thomas may not be quick to give up. It appears Thomas is the kind of guy who won’t take no for an answer. With Wyatt away on business, Ivy may let lust overtake her commitment of love. The rumors indicate that Thomas’ plans could lead to big problems. Will Thomas land in hot water or will Ivy be the one who ultimately pays the price? Stick with “The Bold and the Beautiful” for updates on the consequences of Thomas’ pursuit.

So B&B fans, what do you think about the news that Thomas will try to make Ivy question her relationship? Will Ivy let doubt creep in? Will Thomas finally achieve his goal while Wyatt’s out of town? Let us know what you think in the comments below and don’t forget to check Soap Opera Spy often for the latest “Bold and the Beautiful” spoilers, rumors, updates and news.