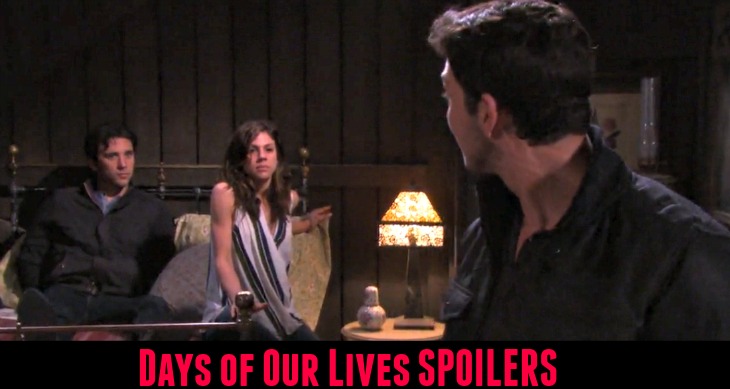 “Days of Our Lives” spoilers tease that Abby Deveraux (Kate Mansi) will give birth to a boy. Her captor Ben Rogers (Robert Scott Wilson) will kidnap the newborn, and leave Abby for dead.

Though Chad is doing everything in his power to save Abby but it may not be enough as Ben takes him hostage, too. Abigail is in labor and the baby is coming too early. Abby will beg Ben to take her to a hospital. Ben has gone crazy as “Days of Our Lives” viewers well know – and Ben will refuse to take Abby anywhere. And now Ben has Chad as a hostage also.

After the baby arrives Ben believes the newborn looks very much like Chad and not at all like him. This will kick things up a notch as Ben devises a new plan. Chad and Abigail will find themselves both chained to the bed as Ben pours gasoline all over the floor, the bed, Abby and Chad. If Abigail desperately wants to be with Chad – well, she can spend eternity with him now, can’t she?

Ben will take the newborn and leave Chad and Abigail for dead. Further spoilers tease it won’t be the end for Abby and Chad just yet. Somehow the couple will find a way to escape the burning building and begin the search for their son. Ben will continue to torture Abigail by keeping her away from her newborn. Chad and Abigail will be frantic to find their baby boy – he may be suffering from health problems because he was born prematurely.

Once Chad and Abby are free it won’t take long before they reveal that Ben is the necktie killer and a manhunt will begin. Will Ben be found or will he escape with Abby’s son? Or will Ben be gunned down in a shootout? Will Abby get her baby back? Will he be Chad’s son and not Ben’s?

“Days of Our Lives” fans you will need to stay tuned because you won’t want to miss one moment! There are so many things that could go wrong – or right – and change the outcome of life in Salem for Abby, her baby boy, Chad, and Ben.