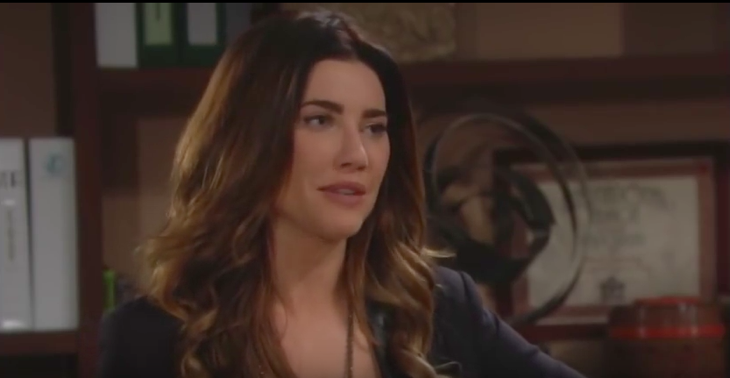 “The Bold and the Beautiful” spoilers reveal that Ivy (Ashleigh Brewer) and Steffy (Jacqueline MacInnes Wood) will have a major confrontation about the video taken at the scene of the accident. Thomas (Pierson Fode) filled in Steffy on the fact that the footage exists and she’ll undoubtedly want to see it for herself. Steffy has to find out just how incriminating this video is. It’s no longer Steffy’s word against Ivy’s. Regardless of what actually went down that night, the footage certainly makes it look like murder and that presents a big problem for Steffy.

Related: ‘The Bold and the Beautiful’ Spoilers: Watch The B&B Video Preview For Monday August 17 – SEE IT HERE!

Ivy will accuse Steffy of striking the fatal blow that took her cousin, Aly (Ashlyn Pearce), away from her. Steffy will stand up for herself and suggest that the clip is misleading. Thomas has been backing Steffy up on this and she’ll soon have someone else in her corner. When Liam (Scott Clifton) gets updates on the video, he’ll listen to Steffy’s story and decide he believes her. However, Liam will suggest that this whole ordeal needs to be wrapped up one way or another. “The Bold and the Beautiful” spoilers say Liam will demand that Ivy either delete the footage or show it to the police. Liam won’t want Steffy to live her life in constant fear of being exposed.

Of course, Steffy will hope that Ivy chooses to get rid of the evidence and let everything go. B&B spoilers tease that Steffy will be petrified that Ivy will take the video to the cops. If the police see things the way Ivy sees them, Steffy could be charged with murder. Steffy definitely doesn’t want to end up in prison. It seems Steffy’s fate lies in Ivy’s hands. “The Bold and the Beautiful” rumors hint that Steffy will ultimately be cleared, but anything can happen when the evidence is that explosive. Stay tuned to the CBS soap to see if Steffy will be declared innocent.

So B&B fans, what do you think about the news that Steffy and Ivy will have a showdown over the footage? Will Ivy delete the video or hand the evidence over to the police? Will Steffy have to pay for killing Aly or will it be determined that this was indeed self-defense? Let us know what you think in the comments below and don’t forget to check Soap Opera Spy tomorrow for the latest “Bold and the Beautiful” spoilers, rumors, updates and news.

‘The Young and The Restless’ News: Chuck Pratt Reveals Why Harding Had To Be The Cabin Killer

‘The Young and the Restless’ RUMORS: Y&R Sharon Case Has Miscarriage and Steals Sage’s Baby