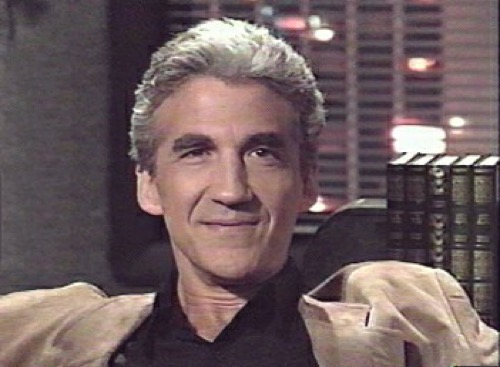 Roger Thorpe [Michael Zaslow] was last seen on Guiding Light in 1997, but has been far from forgotten. Thorpe came to Springfield and immediately began seducing a string of women with his cagey ways. And when seduction wasn’t enough, he attempted to rape Janet Mason [Caroline McWilliams] then later raped and kidnapped both Rita Stapleton [Lenore Kasdorf] and Holly Norris [Lynn Deerfield]. And as much as Thorpe was hated, he was definitely a fan fave for years.

Roger kidnapped, blackmailed, and extorted countless others. He nearly drove Henry Chamberlain [William Roerick] to suicide by stealing all of his money. He killed off Pops Cooper [Vince O’Brien] in a destructive fire and killed several others – allegedly in self-defense. The underlying core of what made Roger Thorpe one of the great all-time villains was not the many, many (innumerable, in fact) criminal acts that he engaged in routinely.

What set Roger apart was his seeming inability to love anyone and his constant evil intentions towards everyone he came into contact with over the years. Roger even admitted it to Holly when he said, “I didn’t know how to love. All I knew how to do is try to control.” And what made Roger all the more disturbing is that he continually found ways to justify his extreme and usually violent shenanigans that he perpetrated against too many residents of Springfield to count.

One of the many reasons we loved to watch Roger do his dirty deeds on a daily basis for decades was that he was a complex and well-developed villain character who, at the end of the day, wanted to love but seemed utterly incapable of doing it right and doing it without hurting those he wanted to love. A good example is that even though he raped Holly, she was able to move past it and they had a real love story going there for awhile – despite the recurring element of brutality in their relationship.

He was described by influential show sponsors as a “powerful, active, sexual, multicolored villain.” Roger displayed an uncanny talent to do bad to anyone who got in his way – or even tried to care about him. And evil seemed to have been in his DNA because his offspring Blake Thorpe [Elizabeth Kiefer] was not a pleasant individual either. One thing you could never say about Roger Thorpe – there was never a dull moment when he was around.

Portrayer Michael Zaslow said, “Roger thinks of himself as heroic, by his own script, of course. He doesn’t consider himself a villain. He considers himself put upon and exploited and unfairly maligned at every turn by those he sees as self-righteous hypocrites who make up the town of Springfield. He’s an angry man and I think that, for me, it’s coming in touch with that anger that helps me portray Roger.”

What did you think of Roger Thorpe? Love him? Hate him? Both? Share your thoughts in the comments below on Guiding Light’s Thorpe and what other villains you loved to hate from GL.

‘The Bold and the Beautiful’ Spoilers: Ivy Won’t Give Up on Justice, Steffy Fears the Worst – Brooke Questions Ridge’s Beef with Thomas