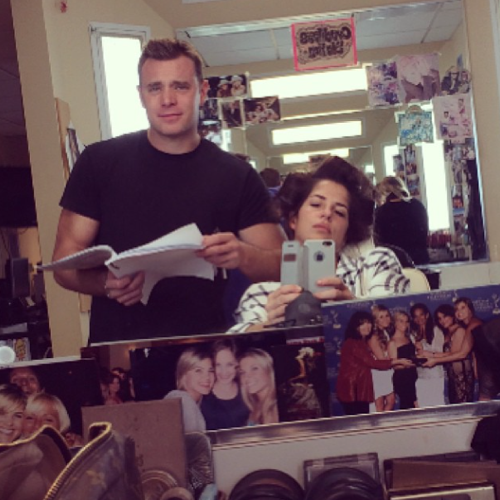 General Hospital‘s Sam Morgan [Kelly Monaco] has been having a great time in Port Charles, but her life has also been in danger numerous times. She’s been having some sexy times with Dr. Patrick Drake [Jason Thompson], but we all know that her husband, Jason [Billy Miller] – who everyone believes to be dead – is also trying to kill her thanks to his partnership with Helena Cassadine [Constance Towers].

Now, Sam and Jason [going by the fake face and fake name of Jake] have had full blown conversations with each other without any of them the wiser to the truth, but Jason’s also slowly regaining his memory. But with so much going in her life, will ‘Jasam’ ever truly reunite?

In a recent interview with Michael Fairman Soaps, Kelly even spoke about her revolving love life, explaining, “She’s lucky! She has some choices! (Laughs) Well, we had Silas (Michael Easton), and now Patrick (Jason Thompson), and then there is Jason (Billy Miller). I definitely have had my pick of the litter!” Sure, but according to fans, ‘Jasam’ is still endgame, right? Well, when asked about whether she thinks that the relationship between Patrick and Sam has legs, Kelly replies, “Not if Jason is in the picture, not a chance in hell! “Jake’ is different, but if there is Jason in the picture there is no way. Sam carries a phoenix/dragon in her pocket, and without thought if she knew Jason was there, (I think this of her and I don’t know if the writers do), I don’t know if she would run back romantically, but she would drop everything to attend to him.”

Of course, Kelly does reminds viewers that when Sam and Jason first met, they were ‘arch-enemies’, and their current relationship has mainly reverted to that. Plus, she does address the fact that something is ‘eerily familiar’ about this guy, but Sam has yet to figure it out. I don’t think there’s many episodes until the truth is revealed, but the way the writers have been taking this season, Jason will probably end up shooting Sam before both of them figure out the truth. Wouldn’t that be a twist for the ages?

What do you guys think about Kelly Monaco’s comments regarding Sam Morgan’s current place in Port Charles, and more importantly, her antagonistic relationship with her husband, Jason/Jake? Let us know your thoughts in the comments below.

The Bold and the Beautiful Fashion: Get Bill Spencer’s Necklace and Bracelet For Less – Don Diamont’s Style!

‘The Bold and the Beautiful’ Spoilers: Caroline Decides To Moves On, How Far Will Rick Go – Brooke Suspects Maya’s Motives