General Hospital Spoilers: Is Fluke Bad Enough To Be Possessed By The Devil? 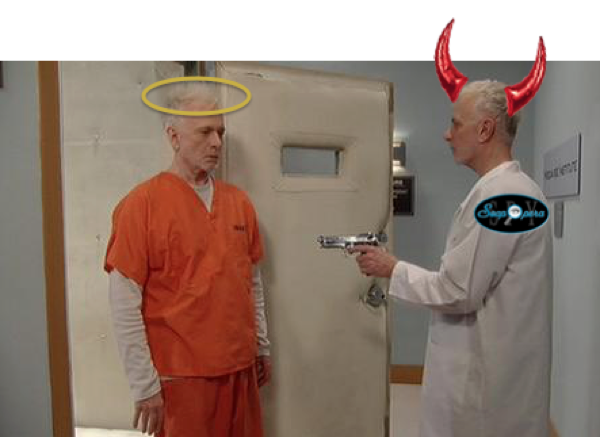 This week General Hospital will deliver more havoc and more questions! The only song that comes to mind when thinking of the Fluke situation is “You’re the Devil in Disguise.” Is Luke Spencer [Antony Geary] possessed?

The Luke/Fluke story would not be the first possession story on a soap, years ago Days of Our lives made Dr. Marlena Evans [Deirdra Hall] was possessed and wreaked havoc in Salem! She tore apart families and put people’s lives at stake, she was truly evil.

Have the General Hospital writers taken a possession story line to a different level? Marlena Evans actually levitated and had yellow cat eyes when she was on the prowl for victims!

A person can be possessed several different ways, some with drugs or hypnosis – those two methods open the subconscious mind up to evil forces. We know that Luke has been in those situations, he has been brainwashed/hypnotised and shot up with drugs, so it is not impossible it could be a possession storyline. Was Luke possessed years ago? People have been trying to control Luke’s mind for many years. Maybe someone has succeeded.

When Luke was found and brought back from Miscaviage his eyes had red rings around them and the red rings have followed him..this character (Fluke) always has a dead look in his eyes, very black pupils.

Fluke knows about all of the happenings in Port Charles as they are happening, nothing is a surprise to him, he seems to always be a step ahead! If he is possessed that would explain it.

Did Helena [ Constance Towers] open a can of worms that she cannot put back in her Pandora’s box, did she open Luke’s mind up to evil forces? When Fluke turned on her last week, she actually looked panicked, like a mad scientist who lost control of their monster.

Fluke/Luke takes great pleasure in other’s suffering. Fluke stands for everything that is wrong in the world. He has no sympathy, empathy, compassion or a conscious, no filter.

He has been trying to get all of the ELQ stock so that he has a company to funnel his heroin operation through. He is a pervert, he has made several unwanted advances on Kiki Jerome who is less than half his age. He threatened little Spencer Cassadine [Nicholas Bechtel] “you better keep his mouth shut or else.” It seems to bring him great joy when there is fear, chaos and havoc .

Does he hate his own daughter and sister? Why would he try to blow up his daughter Lulu [Emme Rylan], his sister Bobbie along with a dozen more people that he has cared for his whole life? He nearly beat his son-in-law to death with a crow bar and left him for dead with a bomb strapped to a corpse next to him!

This is more than just simple old mind control… this is the dark side. Tony Geary loves a good acting challenge, I think he got it and I think he delivered it on a silver platter!