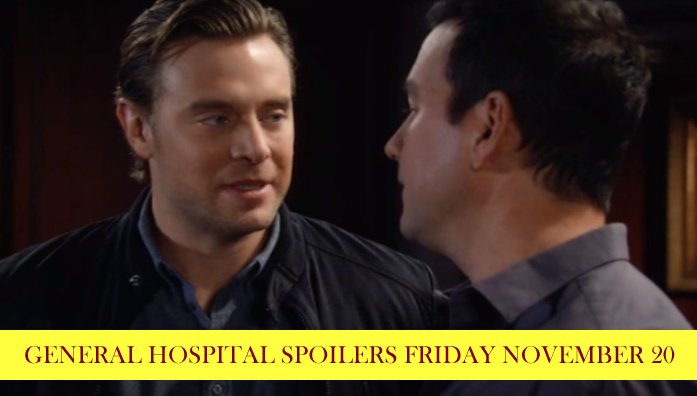 ‘General Hospital’ spoilers are here for Friday, November 20th and there is a ton of action for Jason, Kiki, Morgan, Helena, Sonny and more! Check it out.

Jason Morgan [Billy Miller] is acting a lot more like the cold-blooded killer we know when he threatens a deathbed octogenarian – aka Helena Cassadine [Constance Towers]. Jason is not fooled for a minute by her frail appearance and oxygen tank – he’s ready to deal a death blow if he doesn’t get the truth out of her. Problem is Nikolas Cassadine [Tyler Christopher] and Jason’s own fiancée Liz Webber [Rebecca Herbst] are trying to slow his roll. Neither of them want the truth out.

Jason won’t be deterred and Sam Morgan [Kelly Monaco] cheers him on as he forces Helena to come clean about all her dirty dealing with his brain and how she may have also tampered with his son Jake Spencer [James Nigbor]. Helena has lots to tell – she knows shocking truths about his accident – and other life details but warns Jason he won’t like what he finds out. But the bottom line is, Helena can’t bring back Jason’s memories, so he may even more frustrated than before he came to Greece.

Also frustrated is Nina Clay [Michelle Stafford] who wants her honey Franco [Roger Howarth] out of jail ASAP. She tells Nathan West [Ryan Paevey] no way did Franco run Carly Corinthos [Laura Wright] off the road and tells him Kiki Jerome [Hayley Erin] is the real culprit and he needs to lock her up and release Franco. Will Franco finally admit he was covering for her so that Nina won’t think he doesn’t love her? But once Nathan goes looking for Kiki, people will realize she’s nowhere to be found.

Will Nathan contact Carly and tell her that it looks like Kiki is the real cause of the car crash? Kiki is in even more trouble than if she had stayed in Port Charles. Morgan Corinthos [Bryan Craig] has spirited her off to a remote cabin and is acting like an obsessed stalker. He’s in a full bipolar spiral and wants Kiki to do things with him that make her uncomfortable. If Kiki tries to call home to warn Carly about Morgan, will that push him beyond the limits his frail psyche can take?

Morgan’s dad Sonny Corinthos [Maurice Benard] is also having a bad day. He’s being stubborn about his physical therapy and not following the direction of Epiphany Johnson [Sonya Eddy] who flat out tells him he’d better get used to life in a wheelchair because he’s sabotaging his recovery. Sonny will argue with her since he hates to be out of control, but look for Epiphany to push hard and get Sonny to accept the reality of his situation and that she’s there to help him.

Carly has had enough of stubborn Sonny and goes over to GH where she runs into Patrick Drake [Jason Thompson] and they talk about Jason’s reveal and the impact it has had on both their lives. Carly wonders if Sam will break off her engagement with Patrick who tells her he thinks Helena’s life may be at risk if she doesn’t come clean to Jason. Carly offers Patrick sympathy but she’s also off put by Jason’s reaction to the reveal and how angry he’s been since he found out he was a notorious mob hitman.

Don’t miss Friday’s cliffhanger show then come back to Soap Opera Spy for ‘General Hospital’ spoilers for all of next week plus more news, gossip and soap rumors!