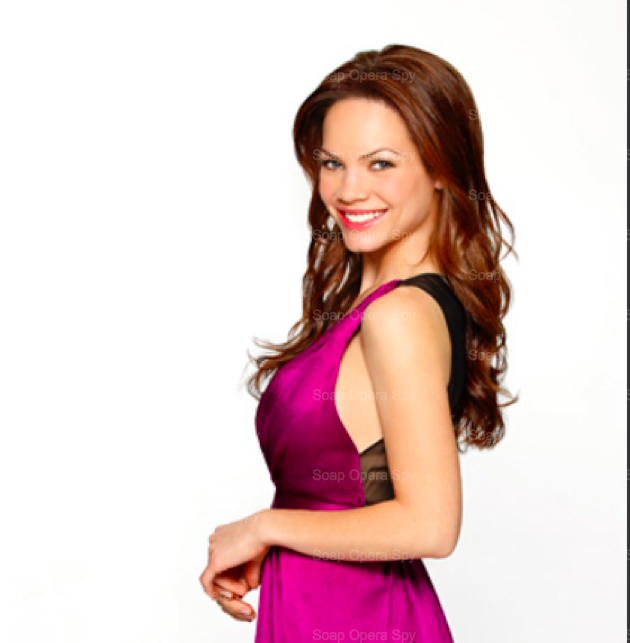 Here’s a huge General Hospital spoiler confirmation! During an #AskGH twitter chat, GH Executive Producer Frank Valentini responded to a fan asking about Liz Webber. He tweeted back to the fan “Liz’s family will grow this summer.” That’s enigmatic, right? Family can mean a whole host of things. Could Liz turn up pregnant by Ric Lansing since they were hooking up fairly recently? Or will Liz and Jake Doe finally consummate and indulge that sizzling chemistry and she’ll get preggers then?

Or maybe it could be more family aside from a child… For instance, we have never known who Liz Webber’s mother is. What we do know is that she has said many times that her mother and father were not good parents. Remember, they sent Sarah and Liz Webber to live with Audrey Hardy while they were in high school while they were off supporting some war effort? Then her dad Jeff Webber called Sarah to be with them and left Liz alone in Port Charles.

Until Liz started getting married, having affairs and reproducing, she was 100% alone in town. So while the baby concept it certainly alluring and would nicely complicate the whole Jake and Sam dynamic, especially since she and Jake had and lost a child, it seems that GH writers lately are bringing in previously unheard of adults characters. Recently they brought in Patricia Spencer and her daughter Valerie then killed Pat off at breakneck speed.

(I wonder is she the fastest introduction and death of a major/adjunct to major character ever on General Hospital?)

Liz’s mom is a likely candidate. They could also bring back her father Jeff. If you remember, he was portrayed by Richard Dean Anderson (aka MacGuyver) but it’s not likely MacG will be coming back to do a stint on the soaps. Although they could always recast the part… Liz’s sister Sarah could also come back at some point – she’s a doctor now and that’s what General Hospital (the actual hospital itself) contains.

What about Steve Webber, Liz’s half-brother? Steve was last seen getting hauled out of his impromptu wedding to Olivia Falconeri before they could seal their I Do’s. Steve would actually be a very interesting choice to bring back. In fact, just a few months ago, actor Scott Reeves (the most recent portrayer of Steve Webber) said at a Soap Fantasy Reunion: “I had such a great time at ‘General Hospital.’ They welcomed me in with open arms, like a family right from the get go. If the timing was right and it presented itself, I would definitely consider heading back.”

Not only is Steve willing to come back, but there is about to be a gaping hole in Olivia’s love life! Wally Kurth has confirmed that he’s leaving GH and headed back to Days of Our Lives as Justin Kiriakis so that’s it for the Ned Ashton and Olivia Falconeri faux-mance. Ned won’t be around to play baby daddy and protect her from Julian so Steve could fill that role nicely. Plus, that would make Steve an instant-relative to Franco – they’re half brothers. And wouldn’t that be fun?

So what do you think Soap Opera Spies? Since we know for sure from show runner Valentini that Liz will have more family by summer, do you think she’ll be baking a bun in her oven that belongs to Jake or Ric (or a yet unnamed man)? Or do you think it will be her mystery mom? Murderous half brother? Or someone else entirely new? Share your thoughts in the comments below!