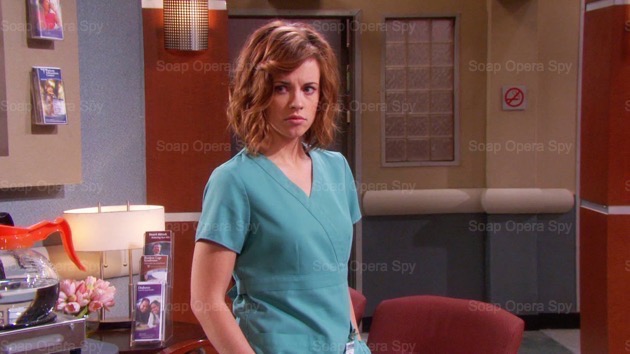 “Days of Our Lives” spoilers tease that Brady (Eric Martsolf) will have an unexpected reunion. DOOL viewers know that Kristen (Eileen Davidson) will be back in Salem soon, but it seems someone else Brady knows will reenter his life. It’s not clear who he’ll reunite with, but perhaps it will tie in with all the baby drama that’s coming. Melanie (Molly Burnett) has been getting closer to discovering who stole Theresa’s (Jen Lilley) embryo and that could mean big trouble. The rumors say Mel will pay a steep price for her interference in Kristen’s scheme. Jason47’s “Days” website reported that Molly Burnett taped her last scenes in December so Melanie could be out of the picture by the end of May. Some have speculated that Melanie might be kidnapped or even killed for uncovering the mystery. However, Melanie could just decide that Brady and Theresa deserve a chance to make it work. We’ll give you updates if there are any confirmed “Days of Our Lives” spoilers on how Melanie will make her exit.

Other “Days of Our Lives” spoilers hint that Daniel (Shawn Christian) and Jennifer (Melissa Reeves) will be at odds over JJ’s (Casey Moss) actions. Now that Daniel knows about JJ’s affair with Eve (Kassie DePAiva), he undoubtedly thinks that JJ should come clean to Paige (True O’Brien). However, it’s hard to believe that Paige would ever be able to get over the fact that her boyfriend slept with her mother. Both JJ and Jennifer know that if the truth gets out, it’ll hurt Paige deeply and destroy any chance JJ had with her. Still, Dr. Dan will most likely say that Paige deserves better than a boyfriend who’s living a lie. Paige is bound to find out eventually and it will be even more crushing if she’s fallen back in love. Jennifer will be furious that Daniel can’t see JJ’s side of things and she’ll declare that their friendship is over. Will keeping Paige in the dark turn out to be a big mistake? Stick with DOOL to see if Eve and JJ’s hookups will have devastating consequences.

So “Days” fans, what do you think about the news that Molly Burnett is leaving the NBC soap? How will Melanie be written out? What about Daniel and Jennifer’s tiff? Is their friendship really over for good? Will Paige end up heartbroken when Eve and JJ’s affair is exposed? Let us know what you think in the comments below and don’t forget to check Soap Opera Spy often for the latest “Days of Our Lives” spoilers, rumors, updates and news.

‘The Bold and the Beautiful’ Spoilers: Brooke Plans to Stop Quinn’s Wedding Against Katie Warning!