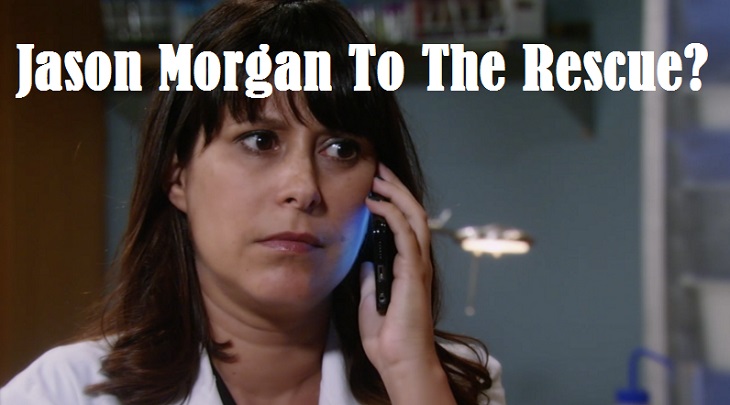 ‘General Hospital’ spoilers reveal that, at long last, we’re going to get some closure on the Robin Scorpio [Kimberly McCullough] storyline that we’ve all been dying to know. It all started on Friday when Robin returned Patrick Drake’s [Jason Thompson] call and she revealed that she knew Jason Morgan [Billy Miller] was alive but then had to backtrack because those holding her hostage freaked out and threatened her. That means it’s likely that she’s being held by the Cassadines.

Robin knocked out one of her guards and tried to call Patrick back to finish telling the truth, but as always happens on soaps, the caller doesn’t blurt the truth fast enough and then the call goes awry. And that’s what happened. Another guard came in and made a threat against Emma Drake [Brooklyn Rae Silzer] if Robin didn’t stop in her tracks. She will, but there’s more to this story. We’ve got lots of questions. Is Robin being held on Cassadine Island? And will she be rescued soon?

Related: How Far Will Liz Go to Keep Jason?

Or will Robin rescue herself? There are a couple of plotlines in play that could help get Robin out of the tight spot she’s currently in and get her safe. Next week, Jason will head to Cassadine Island to confront Helena Cassadine [Constance Towers] about the missing period of his life, the mind control implant chip and why he can’t remember his past. Helena isn’t big on answering questions, but Jason is supposed to find someone unexpected there – will that person be Robin?

And is Robin’s big story arc going to mesh with Jason’s? You’ll recall that Robin has fixed Jason’s brain twice in the past – and she’s the one who knows most about what was done to him medically at Crichton Clark and by Helena. Robin may have the remedy to reverse his amnesia and get the answers he needs, but that’s not the only reason that Robin is back. Jason Thompson is exiting in January (after inking a two month extension on his contract that ended last month) and Robin will be in the mix.

Many fans are hoping that Patrick and Robin will leave Port Charles together to explore another chance at happily ever after together with her free of her lldnappers and Patrick free of his recent messy romantic misadventures in PC. Also, with Anna Devane [Finola Hughes] already in Port Charles and her dad Robert Scorpio [Tristan Rogers] coming back in a few weeks, we can expect some Scorpio family drama to light up the small screen. This will be epic as the three go on a life-saving quest.

‘General Hospital’ Spoilers – It’s Sam Vs Liz in the Battle for Jason and the Gloves Are Off!