‘General Hospital’ POLL: ‘Jake Is Jason’ Reveal – What Was Your Favorite Scene? VOTE! 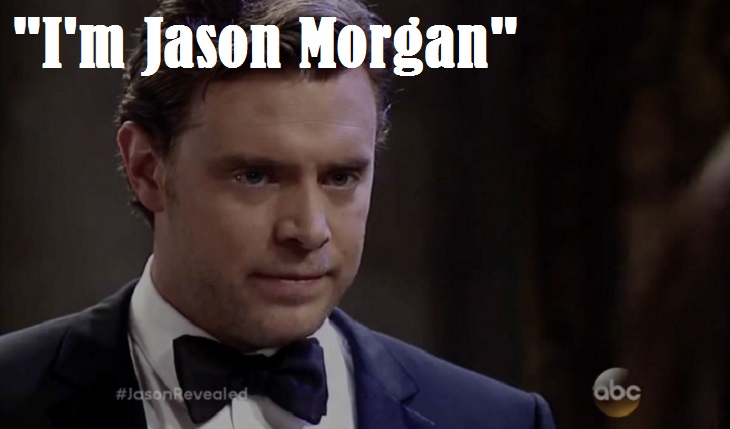 It may have taken the better part of a week to roll out (and a year in the making), but the ‘Jake is Jason’ reveal is finally done. ‘General Hospital’ spoilers indicate that the impact of #JasonRevealed will be felt for weeks (and even months to come). There has been speculation for months about how Jake Doe [Billy Miller] would find out that he’s Jason Morgan and then the reveal came in stages – first to Jason himself then to the women in his life and all the guests at the wedding.

Here’s a look at seven of the pivotal moments of the Jason reveal culminating at the chapel. Check these out then vote in the poll below on which was your favorite.

When Damien Spinelli [Bradford Anderson] left his computer with Carly Corinthos [Laura Wright], he didn’t know what would happen. But when Carly saw Jake’s face morph into Jason’s, the look on her face was simultaneously stunned, hopeful and then frantic. Carly was practically dancing when she tricked Jake into drinking from the bottle then triumphant when she got the DNA confirmation.

The reveal to Jason took unexpected twists while the amnesiac himself repeatedly denied the truth and got mad at what Carly was telling him. He tried to push it off as her lack of acceptance that her BFF Jason was dead. We saw Jason spiral through the phases of grief rapidly as he experienced his life as Jake Doe die only to be replaced with the reality that he was someone else and couldn’t marry Liz.

#3 Jason breaks the news at the wedding

It was poetic that it would be Jason himself that would make the reveal to the wedding guests and – more importantly – to Liz Webber [Rebecca Herbst] and Sam Morgan [Kelly Monaco]. Jason’s anger was palpable as he spat out words he didn’t want to say and had barely come to accept himself. You could see him visibly struggle to admit a truth he did not like one little bit to the woman he loves – Liz.

#4 Hayden cheers from the sidelines

Did you notice Hayden Barnes [Rebecca Budig] sit up to take notice as Jason came into the chapel and she realized Jason was about to break the news of his identity – which she already knew? She practically clapped her hands with glee as she said to Nikolas Cassadine [Tyler Christopher] – “here we go!” If Hayden had popcorn and a pennant, she would have been waving then like a fan at a playoff game.

Liz was stunned that Jason managed to find out the truth in the 11th hour before she could get him down the aisle. So her reaction was spot on for what Jason was expecting, but the rationale behind it was nothing like he could imagine. Liz was shocked, sad, and worried all at once. Most of all Liz, was terrified that Jason’s reveal would mean he would walk away from her, so she played the scene to perfection.

Sam, like Jason, fought against news of the reveal. Sam had just really begun to let the idea of Jason being dead settle in and she was ready to move on with Patrick Drake [Jason Thompson]. Plus, Sam was shocked that her husband had been this close to her for almost a year and she never knew him. Sam’s reaction was mirrored by Patrick’s jaw-dropped stare as they both were staggered by the news.

Once Jason made the necessary speech, he gave in to his primal emotions – anger and frustration – and turned on Nikolas certain that Nik was solely responsible for this torment. Jason blames Nikolas for letting him get this deep with Liz, for missing time with his children, and for not being able to marry Liz and move on with their happily ever after. Nikolas was shocked by the attack but we saw it coming.

So what was your favorite moment of the Jason reveal? Vote in the poll below then share your comments. And be sure to check back with Soap Opera Spy every day for more ‘General Hospital; spoilers, gossip and more.