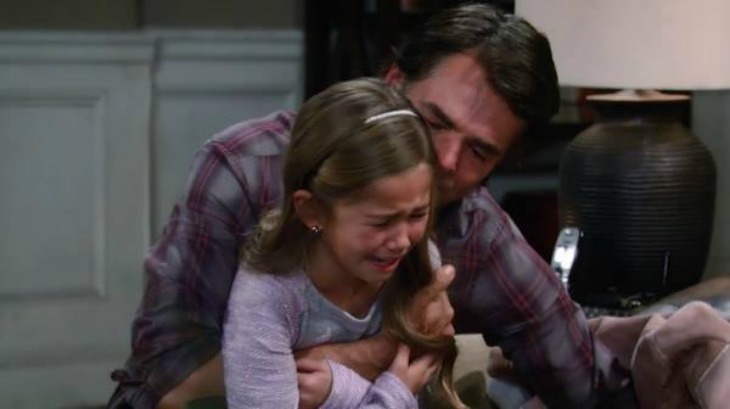 ‘General Hospital’ always turns out stellar performances, but Brooklyn Rae Silzer was a standout GH performer of the week for her portrayal of Emma Drake’s reaction as Patrick Drake [Jason Thompson] and Sam Morgan [Kelly Monaco] announced their split.

If you had dry eyes watching that scene, you may be a Grinch because it was heart-achingly brilliant work by Silzer. She seemed to be in real anguish as she asked why everyone who loves her leaves? Poor Emma has had more loss than any human should experience, much less a child.

Many grown-up actors would have struggled to make that scene authentic, but Silzer did it and was incredible. She went from shock at the announcement, to heartbreak and then, in another moment, frustrated anger.

Who didn’t love the look on Sam’s face when Emma told her to stop saying she loved her and “If you’re going to leave, then do it.” Emma was losing more than just a mother figure, she also lost a brother in Danny Morgan who left with Sam.

Patrick is unintentionally failing as a father because his love life is a revolving door of women for Emma to get attached to – then they’re torn away from her again and again. There was Britt Westbourne [Kelly Thiebaud], Sabrina Santiago [Teresa Castillo] and now Sam.

And all of that is on top of the fact that Robin Scorpio [Kimberly McCullough] is estranged from Emma and has been gone most of her life. Silzer captured all of that in a heartfelt and finely nuanced performance.

She wasn’t just crying, she wasn’t just throwing a tantrum, she was showing that her heart was breaking. It was a “WOW” moment. With Jason Thompson leaving the GH scene soon and Patrick Drake exiting rather than being recast, we hope showrunners know what a gem they have in Silzer.

We hope they keep her character on the scene in Port Charles and also hope that ‘General Hospital’ showrunners will put Brooklyn Rae Silzer up for an Emmy nomination for Outstanding Young Actor in a Drama.

Silzer has always been stellar, but after this week’s performances, her talent is undeniable. What do you think GH fans? Were you moved to tears by Brooklyn Rae Silzer’s portrayal of Emma’s anguish this week? Do you think she deserves an Emmy?

Share your thoughts on our pick for the GH performer of the week in the comments below. And be sure to check back with Soap Opera Spy for more on the ongoing Emma drama as well as daily ‘General Hospital’ spoilers and more!