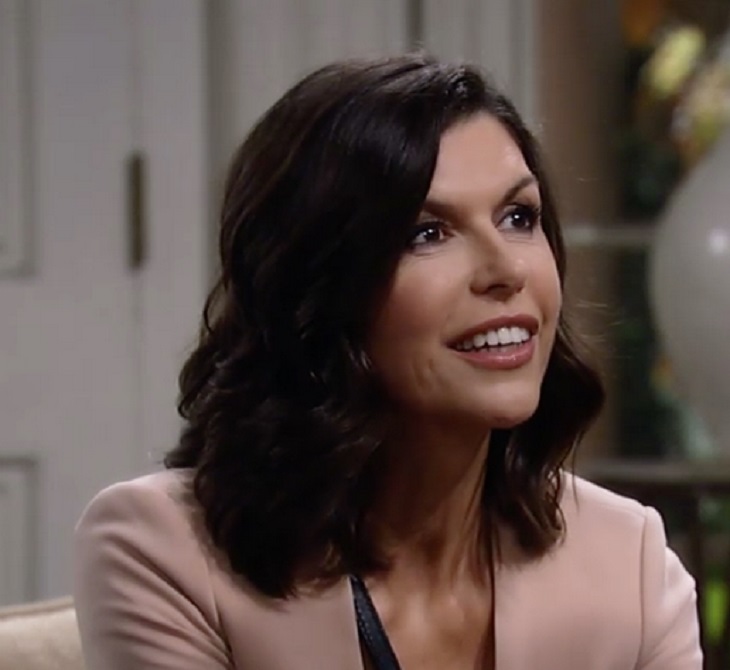 Thursday’s GH focuses on babies and mob business. These ‘General Hospital’ spoilers will get you ready for the October 1 show.

Anna Devane [Finola Hughes] may think she’s in the clear with Paul Hornsby [Richard Burgi] since she believes that Kyle Sloane [Robb Derringer] didn’t provide any evidence against her. Unfortunately, this means she’s going to keep prying where Paul won’t like. Anna goes to Sam Morgan [Kelly Monaco] and asks her to work together on a case – likely the shooting of Sonny Corinthos [Maurice Benard].

Will Anna confess to Sam that she knows 100% it couldn’t have been Carlos? Fortunately, Sam was already working that case to help exonerate her dad Julian Jerome [William deVry] so this is good timing for a team effort. Looks like Anna and Sam will be in the lady PI business together. What will Patrick Drake [Jason Thompson] think of that?

Paul is still considering what to do about Anna and the Carlos situation so he calls in Nathan West [Ryan Paevey]. Nathan has nothing but good things to say about Anna but then Paul tells Nathan that she may not be as heroic as Nathan assumes. Paul wants info on what Anna has been doing in Port Charles and some info on her background to inform his decisions.

Dillon Quartermaine [Robert Palmer Watkins] is talking to himself on set about getting over Lulu Spencer [Emme Rylan] when Maxie Jones [Kirsten Storms] walks up on him. Dillon has a confession to make to Maxie. Will he tell her that her character is based on Lulu and he can’t stop thinking about her – or will he lie and say he was running lines?

Lulu also overhears something – it’s Valerie Spencer [Brytni Sarpi] telling Dante Falconeri [Dominic Zamprogna] that she can’t stop thinking about him. Lulu gets up on her and asks why Val her her mind on her husband. Of course Valerie will cover and say she’s concerned about Dante because his dad is in dire shape and Val just lost her own mom so she knows how devastating this can be.

Ava Jerome [Maura West] shows up to take baby Avery but Morgan Corinthos [Bryan Craig] tries to baby block her. Ava and Carly Corinthos [Laura Wright] have a major confrontation over the baby. Will Ava get to walk out of Chez Corinthos with her daughter or will Ric Lansing [Rick Hearst] be able to pull a Hail Mary and get a last minute block? I’m rooting for Ava.

Later at work, Nathan chats with Val about Dante and tells her to get over him. Valerie admits she still has feelings for Dante and she’s struggling to put those feelings aside. Will Nathan get an inkling that Valerie is pregnant? At what point will Nathan spill the beans to Maxie? This whole situation is heading for a blow up.