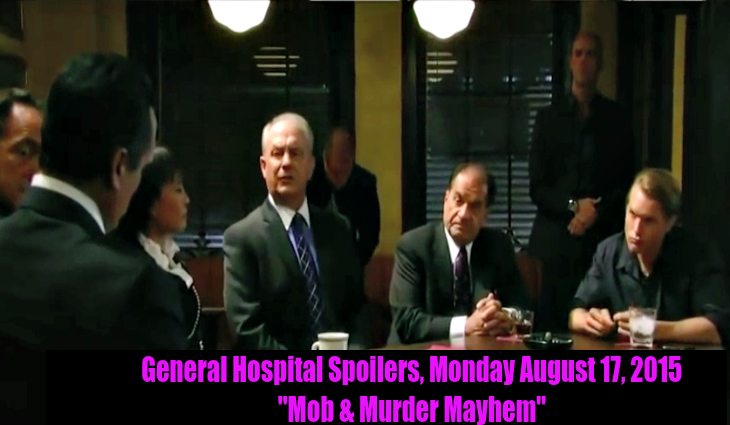 It’s mob and murder mayhem Monday in Port Charles. Check out these ‘General Hospital’ spoilers for the August 17 show.

We’re getting closer to a trial for Franco [Roger Howarth] accused of killing Silas Clay [Michael Easton]. Franco is innocent of murder – for a change – but if he doesn’t start helping his dad Scotty Baldwin [Kin Shriner] with his defense, he could be back in Pentonville. Don’t worry, Nina Clay [Michelle Stafford] to the rescue! Nina is scheming to exonerate her man even if it means she pays for the crime. But Nina will come across some information working with Nathan West [Ryan Paevey] to save both herself and Franco and implicate the real killer. Nina cracks the case!

Also in the vein of murder, Nikolas Cassadine [Tyler Christopher] has Hayden Barnes [Rebecca Budig] all alone in his evil castle and she’s getting her memories back. Surprisingly, Hayden wasn’t faking the amnesia – but now she’s getting pieces of her memory back. She tells Nikolas what she remembers – little snippets of her stay at Wyndemere – but, if she’s smart, she won’t tell him she remembers about Jake Doe [Billy Miller], her threats to expose him and Liz Webber [Rebecca Herbst] and the argument before she was shot. Hayden will likely figure it all out and clam up to strategize what to do next.

Liz is freaking out – again – about Jake finding out the truth about his identity. She’s even more amped up now that Jake put a ring on her finger. Instead of relaxing, Liz will keep stressing herself out more and more and when Jake notices, she won’t be able to explain herself. Once Jake starts hanging with both his son, there’s a chance he may get his memories back plus Hayden still owes him a conversation. But how long will all this take to play out? Frankly, it’s getting played out in terms of fan patience for Jake’s amnesiac story line, so hopefully sooner rather than later. She calls Nikolas to whine about it.

On the mob front, Jordan Ashford [Vinessa Antoine] comes to tell Sonny Corinthos [Maurice Benard] that his tip led the PCPD to a dead guy and a guy who ran out, not evidence against Julian Jerome [William deVry]. Jordan thinks that Sonny is screwing with her while he’s wreaking havoc in the escalating mob violence. Sonny thinks she needs to do a better job at being a cop and find the culprit. He tells her she knows it’s Julian and she needs to nail him at what he’s been doing. But it’s not Julian – sure he may be facilitating – but there’s a new family in town. And it looks to be an old family…

Julian is aggravated that Brad Cooper [Parry Shen] proposed to his son Lucas Jones [Ryan Carnes] when he was already married to someone else. He complains to Alexis Davis [Nancy Lee Grahn] about this but Alexis just wants reassurance that he’s really out of the mob. Brad wants Lucas to calm down and let him explain how he ended up hitched to Rosalie Martinez [Linda Elena Tovar]. Looks like it was a mob marriage made in hell. Brad’s biological mom heads up one of the big five gangs – we just saw her meeting with Sonny – and looks like Rosalie’s big secret is she’s mobbed up and married.

Olivia Falconeri [Lisa LoCicero] also wants to know if Julian is really out of the mob now that she’s back in town. Olivia is with Dante Falconeri [Dominic Zamprogna] and Lulu Spencer [Emme Rylan] telling them how beautiful her baby boy is, but she’s still feeling guilty about keeping the truth from Julian who may now be a safer dad. Olivia wants to hear more about Julian because she needs to assess if she should come clean if he’s really and truly out of the mob – but she has to be 100% sure, despite her guilty conscience – before she comes clean.

Be sure to come back to Soap Opera Spy every day for tons more ‘General Hospital’ spoilers and sign up for our newsletter so you don’t miss a thing.

This article is the exclusive intellectual property of Soapoperaspy.com and any use by other media outlets must be explicitly credited and linked

‘Days of Our Lives’ News: DOOL Deidre Hall and James Reynolds To Be On Wheel Of Fortune

‘The Young and the Restless’ : Happy Birthday To YR’s Devon Winters – 10 Things To Know About Bryton James