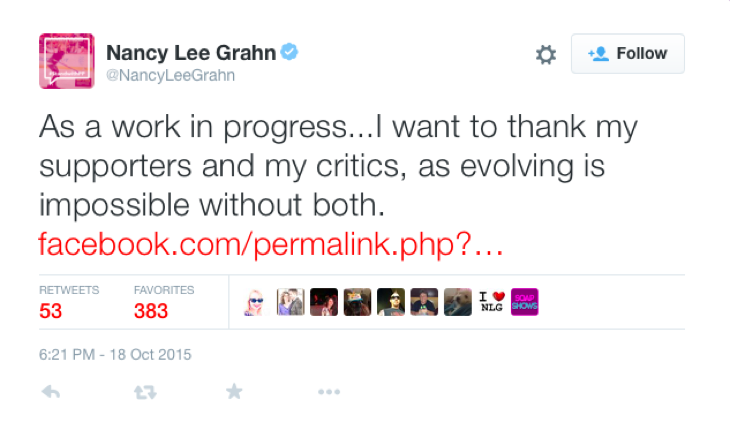 “General Hospital” star Nancy Lee Grahn learned a very important lesson last month when she didn’t think before she wrote on Twitter. On the night of the Emmy awards, she criticized Viola Davis’ speech about women of color. The backlash was intense. She was bashed for days, until she finally distanced herself and gave herself an Internet time out.

Nancy broke her silence after a month long hiatus from social media. She explained the absence from social media has been good for her, even though it had been difficult to stay away. She was able to reflect on her own behavior and thoughts, so she could improve her life in a positive way.

She noted her quest for women’s equal rights had strengthened since her Twitter mishap last month. She continues to be committed to equal rights, fairness, and justice for all women. She said that it is her hope that she continues to stay tapped into learning more about herself and her surroundings, so she can be a better women’s advocate.

She also noted that she was fully aware that her intentions aren’t well received. She said that you could have the best intentions, but if it isn’t well received, it doesn’t really matter how you intended the message to come out. She noted her sense of humor was alive and well, and she will continue to find the humor in life and experiences.

She signed the update as the actress who is a work in progress and hopes every day she becomes a better person than the day before. She thanked her supporters for being there for her. She also thanked her critics for teaching her that she always has room to grow on the personal level and a women’s advocate. She noted it was impossible to evolve without both critics and supporters.

Nancy’s tone seemed to be in a better place than she was last month. She took time to reflect and take something valuable from the experience, which resulted in personal growth. It looks like this may be the end of Nancy Lee Grahl’s social media silent treatment.

If you’ve been looking for me on milk cartons, under rocks, or hiding out with Waldo, you wouldn’t have found me. I may have been absent here, but I’ve been fully present, and alert in my life. With the internet off, I’ve been reflecting, reading, writing, having enlightening discourse, and extraordinary meetings with people I never thought I’d have the honor to meet, let alone converse with. My silence in the media was self imposed and correct. I can’t tweet and listen at the same time. Being quiet and listening has allowed me to absorb meaningful lessons and gain insights that continue to have immeasurable value to me.

To be sure, what you believe you know about me has remained to be so. In fact, my commitment to equal rights, fairness, and justice for the disenfranchised has grown even stronger.

My intention now is to continue to stay tapped in, tuned in, and turned on to learning more. As these lessons unfold with greater clarity, I will humbly and happily share them with you, as I allow myself and my experiences to be used for greater understanding and greater good. I’m excited about what’s to come.

In the meantime, while I’m quite serious about my purpose right now, my sense of humor is alive and well. I will continue to find the funny in funny things, celebrate my beloved General Hospital, and rant about policy and issues that dehumanize others, as well a media that does the same. My goal, and it is a lofty one, is to try not to be snarky, mean spirited, or pile on any individual. Not even reality stars, bureaucrats, or politicians. They are all, after all, human beings.

As a work in progress, who hopes to continually change for the better, I want to thank my supporters and my critics, as evolving is impossible without both.

Now let’s go have some fun this week. Stay tuned.