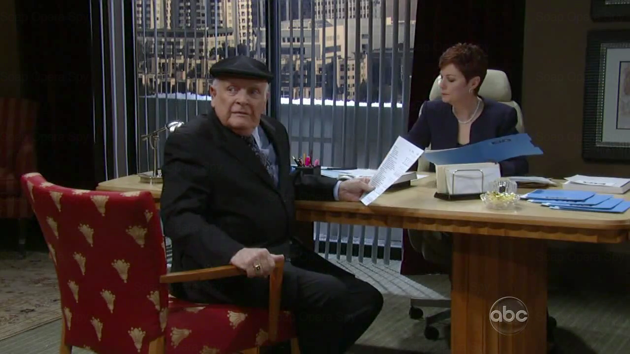 On General Hospital, ELQ International, also referred to as ELQ Industries and ELQ Enterprises, was named for its founder Edward Louis Quartermaine and has holdings all around the world but is headquartered in Port Charles, New York. Edward was the sole owner and CEO for decades before family feuds and intrigues both within and external to the family shifted alliances, stock ownership and leadership.

Although it is not entirely clear what it is that ELQ does precisely, what it does seems to be profitable since the Quartermaines are the richest people in Port Charles (at least among those engaged in legal business enterprises). One line of business is known for sure – ELQ manufactured condoms and, at one point, produced a faulty batch that resulted in unwanted pregnancies, health scares and a lawsuit against the firm.

Over the years the company has had several subsidiaries in addition to the core business that ELQ does. These include:

Pickle-Lila – Quartermaine family matriarch Lila started her own relish business called Pickle Lila with her secret recipe. It’s an instant success and gets ELQ back to profitable after Sean Donely ruined them financially and Monica kicked them out of their stately mansion.

Pickle-Eddie – After her dad cuts her out of the will and Tracy Quartermaine is left only one jar of Pickle-Lila relish and decides she will use it to relaunch herself. She gets help stealing the Pickle-Lila recipe to develop Pickle-Eddie but it’s off to a disastrous start when a taste on The Chew turns into a vomit-fest.

Chloe Morgan Designs – Founded by distant cousin of the Quartermaine clan Chloe Morgan, after Stavros Cassadine strangles Chloe to death, the design firm ends up in the hands of Lila Quartermaine this putting it under the ELQ umbrella.

Lila’s Kids Summer Camp – This is a youth camp established in honor of matriarch Lila.

Port Charles Hotel – The now non-existent PC Hotel was staple of the show until it burned down. During the disaster, Edward suffered a heart attack. Later, Jasper Jacks built the Metro Court hotel on the site, but the hotel is currently co-owned by Carly Jacks and Olivia Falconeri.

L&B Records – Founded by Lois Cerullo and Brenda Barrett, L&B was the launch pad for Ned Ashton’s rock n roll alter-ego Eddie Maine. Edward Quartermaine purchased the company away from its founders on the sly and it was briefly part of ELQ before Jax got it back and scored a seat on the ELQ board.

Donely Shipping – Formerly owned by Sean Donely and planned to be part of a new enterprise called Cassadine-Donely Shipping, Edward foiled Sean’s merger plans and took over his company.

Following is a roster of the CEO’s of ELQ from current to founding:

‘Days of Our Lives’ Spoilers: Sonny’s Shocking Discovery – Marlena Confronts Tori – Will Tells John His Side of the Story