‘Days of Our Lives’ Spoilers: Brady Rips Into Xander for Nearly Killing Eric and Nicole – Paul Grows Closer to His New Family 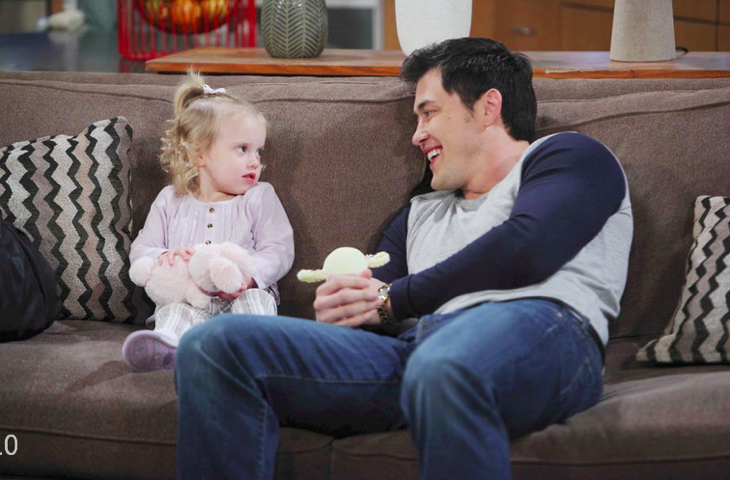 “Days of Our Lives” spoilers reveal that Brady (Eric Martsolf) will rip into Xander (Paul Telfer) for what he did to Eric (Greg Vaughan) and Nicole (Arianne Zucker). Despite nearly killing them at the news station, Xander managed to create an airtight alibi and it looks like he’s going to get off scot-free. However, that won’t stop Brady from giving Xander a piece of his mind. Things should get pretty heated between these two. Xander is charming when he wants to be, but “Days” viewers know he can take a dark turn in a split second. After all the threats Xander’s made, Brady might want to think twice about getting on his bad side.

Nevertheless, Xander’s attention will soon be focused elsewhere. Xander’s time on “Days of Our Lives” is winding down and DOOL rumors hint that he’ll go out with a bang. There are several theories floating around about Xander’s exit from Salem. Serena (Melissa Archer) has been trying to bring Xander down and she’ll continue her quest. In Serena’s mind, making Xander pay for his crimes is the only way to gain back Eric’s respect.

Related:‘Days of Our Lives’ Spoilers for Friday, July 17: Abigail Ready For Drastic Measures If Chad Is Baby’s Father, Someone Else Discovers Pregnancy!

Unfortunately, Serena could be putting her life in danger through her efforts. Xander could end up killing Serena and being forced to go to jail. On the other hand, Serena might actually be able to pull off Xander’s murder. It seems likely that one of them will die and the other will be sent to prison. Of course, there’s always the possibility that the killer could go on the run. Whatever happens, Xander and Serena are sure to get an exciting sendoff. We’ll give you updates if details emerge about their final scenes.

On a lighter note, it appears Paul (Christopher Sean) will get to enjoy some time with his new family. “Days of Our Lives” spoilers tease that Paul will grow closer to John (Drake Hogestyn) and a few other newfound relatives. Perhaps Paul will hang out with Brady and have some fun with Tate. It’s nice to see that Paul is feeling comfortable with the situation. Paul has certainly come a long way since he was lashing out at John in Club TBD. There’s bound to be more drama eventually, but for now Paul can relax and feel accepted as part of the family. Stick with DOOL to watch the warm moments.

So “Days” fans, what do you think about the news that Eric and Xander will have a war of words? Could the fight turn physical? What does the future hold for Xander and Serena? What about Paul? Are you glad Paul is getting to know John and his other family members? Let us know what you think in the comments below and don’t forget to check Soap Opera Spy tomorrow for the latest “Days of Our Lives” spoilers, rumors, updates and news.

‘The Young and the Restless’ Spoilers for Monday, July 20: Paul Wants Gabe’s Fingerprints, Abby in Car Accident, Stitch Has Feelings for Ashley

‘The Bold and the Beautiful’ Spoilers: Rick Proposes to Maya Again – Ridge and Thomas at Odds – Caroline Tells Thomas She’s Committed to Ridge