‘Days of Our Lives’ Spoilers: Casting Call Points to SORAS for Joey and Theo – New Producers Hope to Shake Things Up

‘Days of Our Lives‘ spoilers hint that DOOL fans can expect major changes as the show moves forward. Dena Higley and Josh Griffith recently replaced Gary Tomlin and Christopher Whitesell as head writers on the NBC soap and it seems more shakeups are in the works. According to Soap Opera Digest, a “Days” spokesperson says that co-executive producer, Lisa de Cozette, will be replaced by director and producer Albert Alarr.

Janet Spellman-Rider will also serve a role as producer. After months of struggling in the ratings, it seems the network execs have decided to breathe new life into DOOL in a big way. Even ‘Days of Our Lives’ star Drake Hogestyn, who plays John Black, has taken note of the shift on set. Drake recently tweeted “Clouds are lifting! Gary, Chris & Lisa…out! Dina, Josh & Albert…in! Energy on set is through the roof!” Drake also used the hashtag “#staytuned” and included a picture of a sunny sky filled with parting clouds. 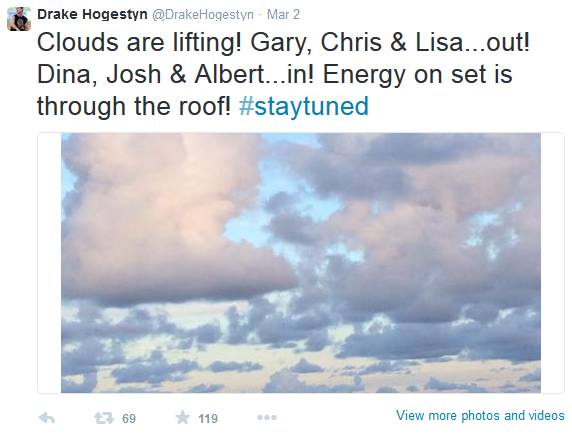 While Drake seems excited about the changes, other cast members may be a little worried about what’s next for their characters. After the previous writers dropped the ball on Jordan’s (Chrishell Stause) storyline, Stause was let go and her last scenes air this month. Now that new writers and producers have taken over, they may be looking for a fresh start on DOOL. That means more characters could get the boot, especially with the rumors of budget cuts for all four daytime dramas. Time will tell who stays and who goes, but there will almost certainly be a few actors dropped from the payroll.

Still, there will be at least a little hiring to offset the firing. Daytime Confidential is reporting that “Days” recently put out a casting call for two teenage boys. Word has it that both Joey (rarely played by Jadon Wells) and Theo (occasionally played by Terrell Ransom, Jr.) could be SORASed to help the show appeal to younger viewers. Many DOOL watchers have complained that current teen characters like Paige (True O’Brien) are too bland and can’t connect with the audience. Perhaps the new kids on the block can turn things around. We can only hope that all these changes won’t mean growing pains for “Days of Our Lives” in the near future.

So “Days” fans, what do you think about the news that DOOL will be forging ahead with new producers and head writers? Are you worried about the changes or excited about what’s to come? Which characters would you like to see leave Salem and which ones do you think should stick around? Let us know what you think in the comments below don’t forget to check Soap Opera Spy often for the latest “Days of Our Lives” spoilers, rumors and news.

‘The Young and the Restless’ Spoilers For March 5: Nikki Arrested For Attempted Murder; Sharon Wants Dylan, A Mysterious Threat Appears