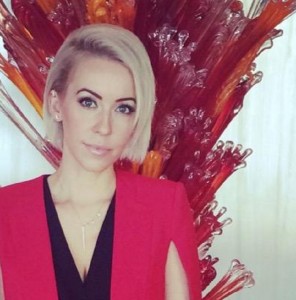 “Days of Our Lives” (DOOL) alum Farah Fath (Mimi Lockhart) is a newlywed and five months later she still gets excited when talking about the fairytale wedding. The actress has also moved to Canada and is a full-fledged Canadian citizen. Fath and hubby Phil Galfond now split time between their homes in Las Vegas, Nevada and Vancouver, British Columbia.

Farah isn’t just alum of “DOOL,” she also starred for four years as Gigi Morasco/Stacy Morasco on “One Live to Live.” So, when it came to choosing bridesmaids for her May 5, 2015 wedding former cast mate Melissa Archer (Natalie Buchanan, “OLTL,” Serena Mason, “DOOL”) was a natural choice. “We were good friends on [“OLTL”] and we both moved back to [Los Angeles], we started hanging out all the time.” The actresses lived together and Fath calls Archer a “tremendous friend.”

In the most recent Soap Opera Digest Fath explains there was quite a bit of excitement surrounding the big day! Farah and hubby-to-be Phil Galfond didn’t close on the brand new house they had built until the day before the wedding. Things were a little crazy, since the couple had planned to hold the ceremony and reception at the house. “We definitely wanted to get married [in the house] – that was going to be our way of christening the house. “

Fortunately Farah’s hubby was able to find a loophole and draw up a three-day rental with the contractor. The couple was able to get the necessary set-up completed for the wedding. It was a pretty close call, but Fath says, “It all worked out and it was really beautiful. I definitely had my dream wedding.” Most of the day was a bit of a blur, but Farah Fath does remember one thing, “It was the coldest night in Vegas in like 100,000 years!”

Related: A Look at the Soap Ghosts that Have Haunted Our Favorite Shows Over the Years

After the excitement of having a dream wedding Fath was also very happy to solidify her Canadian citizenship. Getting her first gig as a Canadian resident was pretty easy, but Farah knows it won’t always be that way. Farah was tapped to star in Alison Sweeney’s Hallmark Movies & Mysteries Christmas movie “Murder, She Baked: A Plum Pudding Mystery.” In case you missed it Sunday, November 22 you can catch the made-for-television movie on Sunday, November 27 at 7:00 a.m. ET/6:00 a.m. CT – so set your DVR.

Congratulations to Farah Fath on all the exciting things that have happened over the past few years! Could motherhood be far behind?

‘The Young And The Restless’ News: Daniel Goddard Emergency Surgery – Back To Hospital After Scott Elrod Fight