‘Days Of Our Lives’ Interview: Charlotte Ross Discusses Role As Eve Donovan On ‘DOOL’ – Returning To ‘Arrow’ As Donna Smoak 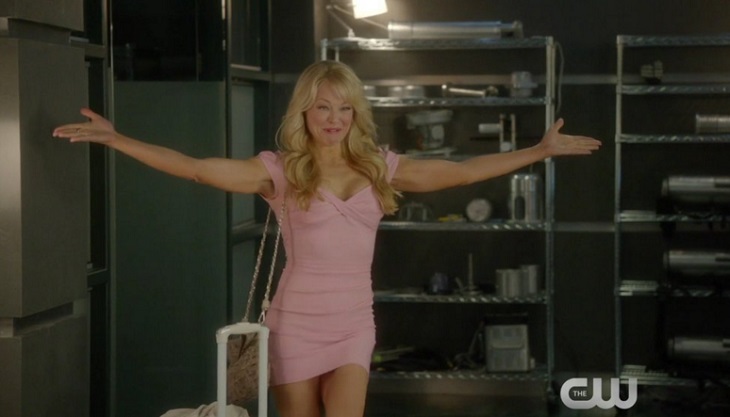 “Days of Our Lives” alum Charlotte Ross (Eve Donovan) will reprise her role as Donna Smoak on the CW show “Arrow.” Fans will see more of Felicity Smoak’s (Emily Bett Rickard) mom this time around – Ross is scheduled to drop in for at least three episodes of the fourth season of “Arrow.”

Set your DVR! Donna Smoak (Charlotte Ross) first appearance will be Wednesday, November 11 – 8 pm ET/7 pm CT). Just what has brought Donna back to Star City? Charlotte reveals that Donna and Oliver Green aka Green Arrow (Stephen Amell) have kept in touch by phone. Oliver has asked Donna to return to Star City for the sake of her daughter’s sake.

In an interview with TVLine Charlotte Ross talked a little bit about her time at “Days of Our Lives,” “The Heights,” and “NYPD Blue.” Ross’s role as Eve Donovan on “DOOL” was her first television job right out of high school. Charlotte reminisced about being immediately involved in a front burner storyline. “It was 40 pages of dialogue a day, but it was a dream come true,” Charlotte recalled. The actress would go to the set of “DOOL” in the dark, come home in the dark and there was no hiatus. “It taught me a wonderful work ethic,” Ross says.

Charlotte left “Days of Our Lives” to join the cast of the primetime Fox drama “The Heights” which followed a group of young aspiring musicians. Ross was cast as a lead singer who could play a guitar. “The Heights” even had a hit single – “How Do You Talk to an Angel” – and Charlotte has a gold record hanging in her home office.

The controversial ABC cop drama “NYPD Blue” was the most challenging of Charlotte Ross’s career. In February 2003 ABC received $1.2 million in FCC fines because Charlotte’s “backside and other bits were bared” in the “Nude Awakening” episode. Charlotte Ross is pretty proud that her backside is part of television history! “Yes, I showed my a** – so had Dennis [Franz], so had Kim [Delaney], so had a lot of other people. For some reason, mine was the ‘poster a**’ for how TV was changing.”