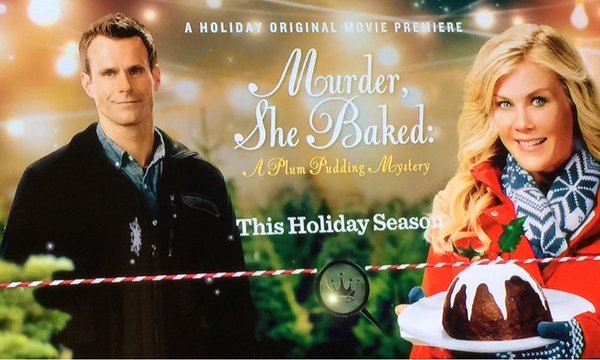 “Days Of Our Lives” star Alison Sweeney has a brief stint in Salem this year as Sami Brady during the 50th anniversary of the NBC soap opera, but the fan favorite actually left the daytime drama in 2014 to work on other projects.  One of those projects, was the “Murder, She Baked” movie series on the Hallmark Channel.  The next installment of the awesome movie franchise is set to premiere on November 22nd and is titled, “Murder She Baked: A Plum Pudding Mystery.”

Of course, “Murder She Baked: A Plum Pudding Mystery” is set during the holidays, and once again Sweeney will be playing the part of Hannah Swenson.  Sweeney recently sat down to discuss the Hallmark Movie in a “Behind The Scenes” video, and Sweeney revealed that her character Hannah actually witnesses a crime at her local Christmas tree lot – and she is determined to solve the case.

“All My Children” fans will be happy to hear that they can actually catch Cameron Mathison in Alison Sweeney’s new movie as well, the AMC alum plays the part of Detective Mike Kingston – and Hannah Swensen’s love interest.  Cameron and Alison’s banter in the Hallmark movie is adorable!

Did you catch Alison Sweeney’s first “Murder She Baked” movie?  Are you as excited as we are to see the holiday mystery unravel?  Don’t forget to set your DVR’s for November 22nd, or watch “Murder She Baked: A Plum Pudding Mystery” live on the Hallmark Channel.

‘The Young And The Restless’ (Y&R) News: Camryn Grimes Discusses Break-Up From Real Life Boyfriend, Plus Mariah And Kevin’s Relationship